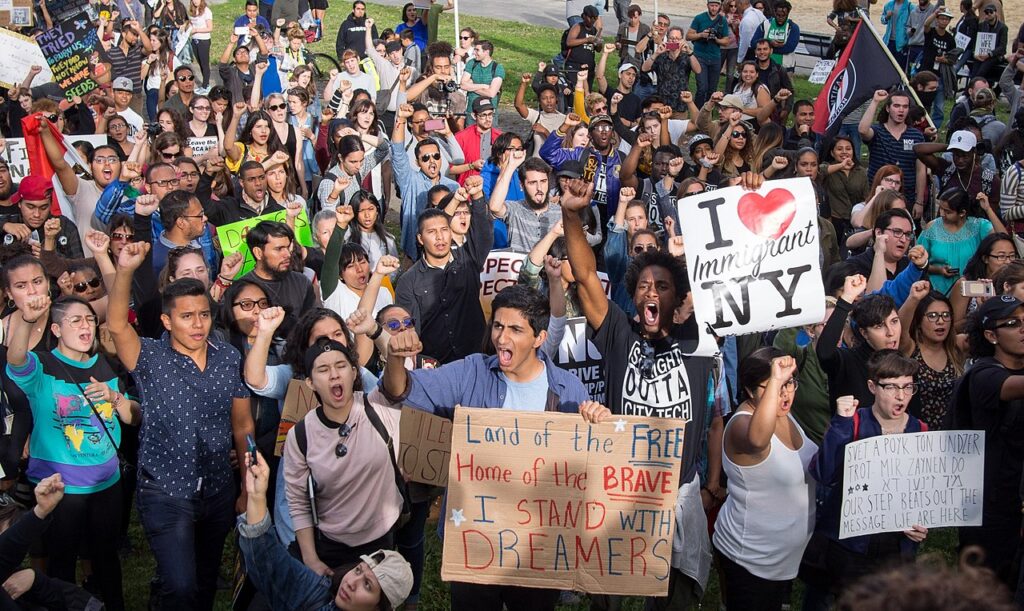 I feel like, every time I get a new news alert, I prepare myself for a heart attack. These are truly strange times we live in, and by strange, I mean bananas. The occupant of the White House is nothing more than an immature, vengeful, white supremacist who wants to undo the progress this country made under the leadership of a black man. I find myself feeling frustrated, angry and after a short period of time, re-energized to keep up the activism I and so many other women have been doing since the U.S. presidential election.

But earlier this week, when I heard the news about DACA or Deferred Action for Childhood Arrivals, I couldn’t quite place the emotions I was feeling. It was an odd combination of sadness, emptiness and a pain I hadn’t felt since the Muslim ban was first implemented.

I was brought here as a child, when I was two years old. My parents also brought me to give me a better life than we had in India, the country of my birth. The only difference between myself and an individual relying on DACA is that I am a documented immigrant. I come from a family with enough educational and economic privilege to have always been documented. My mother is very well-educated and she was able to come to the United States on an H1B visa. My father and I came as dependents. My mother worked during the day and my father worked nights, so that we could make ends meet. Immigrants aren’t eligible for food stamps or government assistance, except maybe subsidized meals at school, depending on the state. So, most of the time, all we had in our fridge was milk and a loaf of bread; maybe butter if my dad managed to get some tips that week. One of my dreams as a young child was to eat McDonald’s someday. I would often tell my mother that, once we became rich enough, I wanted to be able to eat there. I remember my parents would buy fried chicken on Thursdays, when there were discounted deals, and the three of us would share a two-piece fried chicken meal.

That is the life many, if not most, immigrants lead when they come to this country. Stigmatizing immigration is ingrained in the history of this country. The groups targeted change but the oppression stays the same. This is despite the fact that this is a country of immigrants and early European immigrants totally destroyed the indigenous people that were already inhabiting the land.

I am fortunate enough to have a mother who is highly educated and extremely good at her job. Today, she’s one of the finest in her company and there isn’t a single person who doesn’t love her. Today, because of my mom’s job and my dad’s love and support, my parents have achieved the American dream. They’re citizens. They’re homeowners. They are financially stable. They have one college educated child and another one in college. They can afford all the luxuries they could not twenty-some years ago. Today, because my mother could afford to send me to college and graduate school, I have a stable income, I am self-sufficient, and I can proudly say I am independent in each and every way. All of this was possible, solely because of education; the education that brought my mom here. The education that allows me to have enough money to travel during my time off, the education that allows me to go to McDonald’s whenever I want.

That is the impact of the opportunities provided to individuals receiving DACA. DACA allows these individuals to pursue opportunities, get an education, pay taxes and not live in the shadows. It fosters trust between these people and the government in the only home they’ve ever known. It allows them to stay here legally and contribute to the economy. It allows them to give back to the country that has given them them everything. I can say this, because I feel the same way.

America has given me everything. An education, citizenship, a job and many opportunities that I wouldn’t even have dreamed of had my parents not made the decision to move twenty-three years ago. DACA is that path for those, who like me, were brought here as children. Unfortunately, not all of them have the privilege I did.

So many people say they don’t oppose legal immigration, yet are fine with profiling Muslims who have lived in this country legally for years. So many say they aren’t racist but protest at the thought of confederate statues being removed. So many say they don’t hate gay people but assume that marriage is the only right gay people deserve. It’s so easy to dehumanize undocumented immigrants, but do any of these people actually know any DACA recipients?

I do. One of my closest friends from college is undocumented. She was brought here in first or second grade. She doesn’t even remember, because she was so young. In her time in America, she’s impacted the lives of millions, including mine, with her perpetual positivity, unconditional kindness and limitless love. And through DACA, she became a teacher and went on to teach at a Title I school in one of the poorest neighborhoods in the state of New York. Today, she is afraid. Today, a person who has done nothing but spread love and joy in this world may have everything she’s worked so hard for taken away from her. Today, the jealousy of an old white man will destroy a young brown woman’s life. My friend’s story is just one of the hundreds of thousands individuals who receive DACA. Almost a million people will be affected by this. And that’s only counting those who receive DACA. That doesn’t count their families, the impact on the economy and the general mistrust and lack of safety the act of rescinding DACA creates.

That is exactly why it is our job, particularly those of us who are privileged enough to be documented immigrants, to speak up. We can not let the dreams of these amazing individuals be destroyed because of the xenophobia that reeks from Donald Trump’s policies. DREAMers are teachers, lawyers, doctors, first responders, engineers, and so much more. They have taken the adversities that life has thrown at them and cultivated those adversities into their destinies. They contribute to society in meaningful ways. And unlike the occupant of the White House, they actually pay taxes, aren’t under criminal investigations, haven’t filed multiple bankruptcies and have actually worked for all that they have today (because they didn’t have a rich father who could just give them a million dollars).

So, my fellow documented immigrants, it is up to us. We, more than any other group, must stand with DREAMers because we understand their struggles, their strife, their situation. Do not let your privilege of being a documented person blind you to someone else’s struggles. We have to stand for those who can not stand for themselves. We must acknowledge their humanity. We have to fight for their rights to stay in this country because they haven’t done anything wrong. They did not come here to take away anything from anyone. They are just trying to do the best with the hand they have been dealt; just like you and me.

Saher Hyderali
Speech-language pathologist by profession, writer by passion. Ravenclaw by nature, Gryffindor by nurture. Politics is my poison of choice and I believe in being kind to everyone.

The Type of Sexual Assault We Don’t Talk About: Coercion 18261