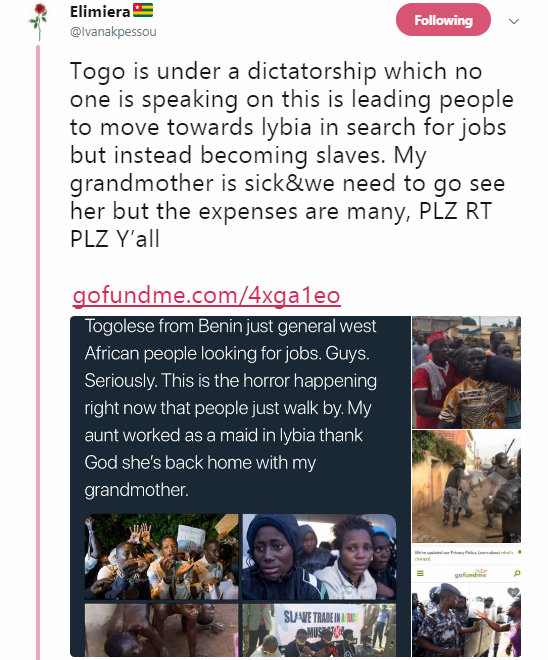 Hoguè Elimiera-Ivana Kpessou is a nineteen year old model and student based in Florida currently, but her homeland is Togo which she has been actively been advocating for more as Togo’s political climate worsens.

Togo is a country in West Africa that has a long history of struggle through no fault of its people. From the large impact that the historic and barbaric slave took in the nation to war, poverty, a dictatorship for the last fifty years, the people of Togo are in dire need of help.

This week I interviewed Kpessou about her GoFundMe and plans to assist Togo:

Q: So my first question is if you can sum up the situation in Togo and why you are so invested in it?
A: The situation at hand is simply the reign of a dictatorship painted over as democracy. The current president is of the same lineage that has ruled Togo for over 50 years now. As you know, many of Africa is under rule by Europe.

What works me in the global mentality of Africa’s poverty yet the truth being, we are a safe house of which is stolen from and used to make another nation richer. Our presidents are organized and placed there by the request and rule of another. Our presidential advisors are a cabinet made up of those in government positions whom have fled other countries for doing wrong. Our president has many women who he builds and spends money for but our roads aren’t even road in some areas. There are areas where school students use bricks are desks. The monthly income for one family is about 80 dollars, barely 100, as it used to be.

Medical wise, the cost of school has only affected people causing many to stop before they can get ahead. Israel is a close ally of Togo but personally I believe in the same way, it’s just leverage.

My grandmother and much of my family are back home which I haven’t seen since I was six years of age. My sister whom was born here hasn’t seen them at all. All this is a huge reason why I’m so invested in raising money to go back. To see them. Help. Something because everyone is too busy trying to survive to help the next person.

Q: It’s insane that Togo and it’s people have had to endure so much. Is your goal to help bring your family back to America with you or to try and assist while you’re there?
A: The expenses would be more and a lot harder to bring them all here which is the problem and the reason it’s so important for me to go there and raise money to do so. More change would be done for the majority than if I was to only bring one alone. And my grandmother has grown too in love with her country to leave it now and start anew.

Q: That’s completely understandable! I imagine many of the citizens feel similarly. They shouldn’t have to flee their homeland to feel secure. What kind of work do you hope to do while overseas?
A: Well I am in my first year of college. I’ve been able to get friends back home but selfishly I want to help my family. My aunt recently returned from working as a nanny in Libya. Which is common work but as you know, there is a lot of slavery there.

A little money goes a long way back home and I wish to help my grandmother whom is getting sicker. And on top of that, I have a few cousins back home which I want to personally meet with and tutor some of the kids when I go there. Since it’ll be during the summer, as I want to help and aid the school students.


Q: That’s really amazing, Elimiera. So what would you advise people from other countries, who are likely in better living conditions, to take away from all this? What can we do to spread awareness and help?
A: I say it’s something that won’t get anywhere unless it’s spoken about. Africa is already painted in poverty to much of the world so to them, rather most don’t find the need to speak on anything because they carry a very “so what, that’s not new” mentality. It’s our job to fight for world peace but the actions aren’t taken towards it. The words are just an action for the mouth to say.
That’s why though I need the donations. I ask for retweets the most because I want the news to travel rather than stay in one place and do nothing at all. I’ve gotten messages for others that have similar situations. That alone shows me it’s going somewhere. Unless it’s a celebrity or an event a celebrity speaks about, many of these things don’t go anywhere which is what haunts me.

So far, Kpessou has only raised $127 out of her $15,000 goal which puts her at only 0.85% of her target. You can view more details and view her fundraiser here as well as donate. You can also follow Elimiera here for more frequent updates on her fundraiser and activism.

Tweet
Previous ArticleThe 2018 Women’s March Is Here: What You Need To KnowNext ArticleBeauty Has No Color Palette

Bridgette Alexis
22 year old poet and author of Yellows and Peaches. Writer for Women's Republic. Editor and writer for Mogul. Puppy parenting with the love of my life. (twitter/ig: @brigibeeee)