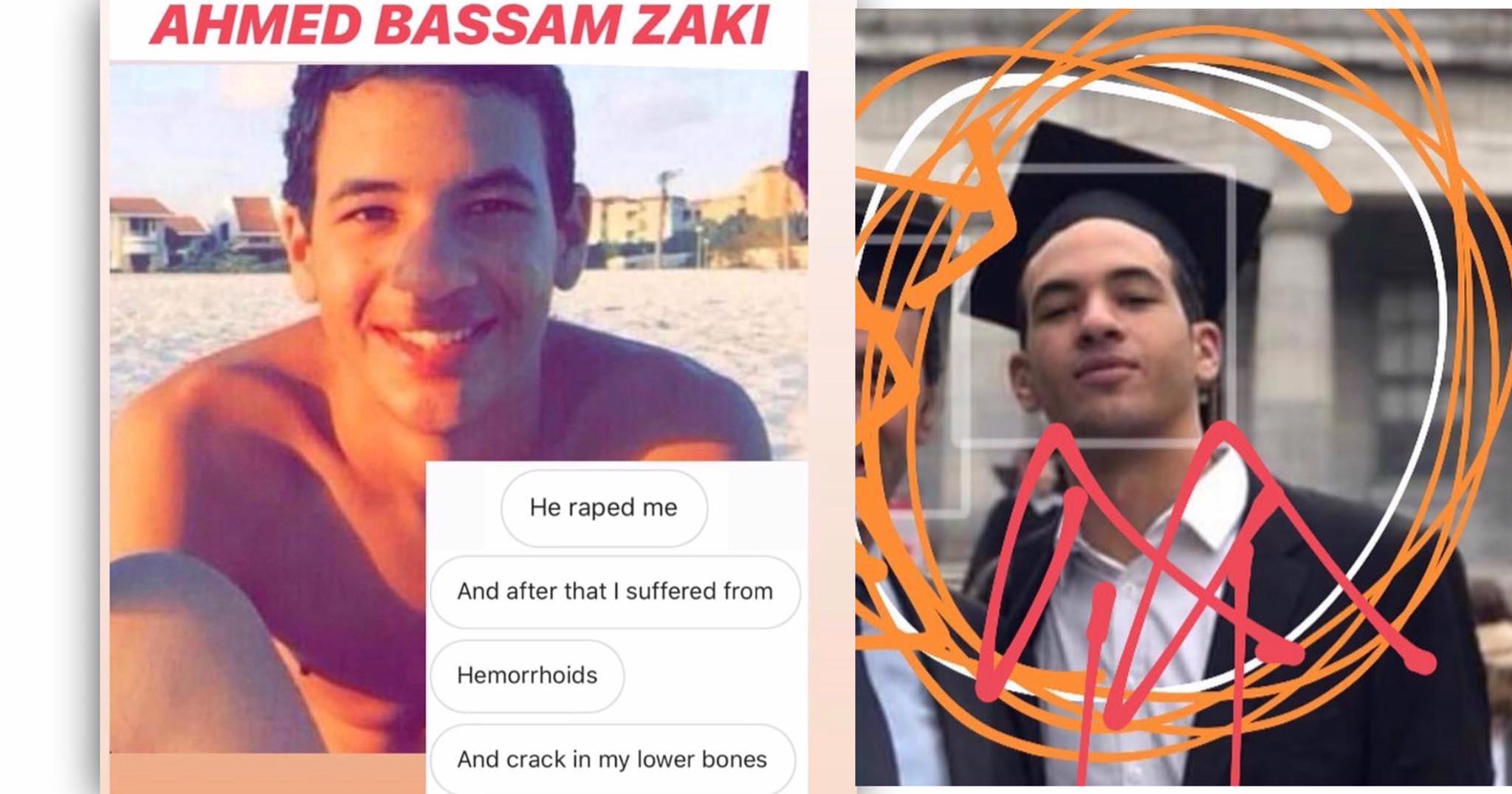 Every country is currently dealing with its own problems and issues and the whole world dealing with Covid-19.
Egypt is no different. Egypt and the MENA region have an ongoing history of disrespecting women. According to The UN, 99.3% of Egyptian women experienced sexual harassment. A study in 2017 found that Egypt is a dangerous country for women to travel on their own. Hopefully, this is will change in the near future.

How It All Began

On July 1st, an account on Instagram posted about a guy called Ahmed Bassam Zaki. Also known as AZ or Ahmed Zaki. This account called him a sexual harasser and a rapist, providing concrete evidence against him of all types. Ahmed Zaki blackmailed, harassed, and raped over 100 girls -and allegedly boys- from all ages.

Ahmed Zaki’s story started back in 2018 when a girl came forward on a Facebook group of the AUC University. (“RATE AUC PROFESSORS”) The girl explained that Zaki was harassing her and two of her friends. Over 50 girls shared their experiences with Zaki of harassment as well.

Zaki did not apologize nor admit to what he had done; he tried to manipulate the victims and threatened to commit suicide on campus if they did not stop. He knew he was protected by the patriarchy and his dad’s wealth.
This was when he moved to Barcelona to attend the EU business school. Later in 2020, the post which originally sparked the rage and accusations against him disappeared.

The account that posted the case of Ahmed Zaki a few days ago, posted multiple evidence against him. Evidence of all types. Voicenotes of him threatening his victims to expose them and ruin their reputation. Screenshots of his conversations blackmailing his victims, some of them were minors.

A victim of his came forward and told her story to this account, anonymously. Zaki called her a whore and a slut. He threatened that if she didn’t do what he asked of her, he would send what he had on her to her sister. The predator gave her a deadline to think about the “proposition” he offered her if she didn’t submit to what he wanted: he would make her an outcast in society.

In another story, Ahmed Zaki matched with a girl on Tinder and found out exactly where she lives and her parents’ names and info. He used this information to terrorize her and blackmail her. Zaki demanded her to send him nudes and have sex with him. She had to block him and deactivate all her accounts for a while to get rid of him.

Another victim told her story about how Zaki almost raped her, but she magically escaped. He started touching her and trying to take off her clothes, she kept saying no and cried for him to stop. But he never stopped until she pushed him off. He told her that he still wanted to ejaculate, he stood there standing still and masturbated in front of her as she ran away and called a friend to pick her up.

Ahmed Zaki raped a victim who happened to be a Tunisian public figure. However, she stayed anonymous. The Tunisian victim lived in Egypt before the incident. Ahmed texted her and told her that he wanted her to help him become a radio host, she replied in good faith. Bearing in mind how they had a lot of mutual friends, she thought he was a good person. She told them she would help him.

They agreed to meet in a cafe in his compound, he went to meet him but he told her that he felt sick and asked her to come over to his house. She politely refused and asked him to meet out of his house. When he saw her, he told her that she should see their gym since she’s wearing sportswear. Once they entered, he pushed her to the wall and started raping her while she was crying, begging him to stop. He didn’t.

When the guard heard her screaming and rushed to the gym, Zaki tipped him off and told him to stay away and keep anyone else out. Ahmed Zaki raped her anally, which gave her hemorrhoids and a crack in her lower bones. He called her a whore and a slut and told her to leave. She left Egypt and left everything she ever accomplished behind her.

After transferring from Cairo to Spain, Ahmed did not stop there. You would think that by transferring to a European country that has more strict laws to protect women he would be more afraid, but no, he was not afraid.

He harassed four women at his university in Barcelona. He started asking them sexual questions randomly. Some told him to stop and others told him that they had boyfriends, but he just ignored what they said and kept sexually harassing them. Until they all blocked him.

One of the girls he harassed in Spain explained that Zaki texted her on Instagram after an exam, asking her how the exam was. They did not know each other before that. The girl felt that he was creeping her out, but she tried to be friendly and told him that she did OK. She told him that she was in class and couldn’t talk. However, he didn’t stop texting her.

Some of Zaki’s victims were minors as well. One of his victims is a 16-year-old girl, he forced her to perform sexual activities with him under his threats. After a while, Zaki asked her to perform more sexual activities with him. The minor refused because she is in a relationship then. However, he threatened her to kill her boyfriend to expose her to her family. “I will kill him if you don’t suck my dick,” he said. This account posted voice notes of his threats against her, here is the transcript:

The Power Of Social Media

This case was sparked by the power of social media. When the account posted about the predator, dozens took it to Twitter to demand justice for his victims. Ahmed Zaki’s victims are now over 100 victims. Two male victims came forward on anonymous accounts, however, they never reported it.

In the course of 3 days, the issue has caused a lot of controversies. Egyptians are not educated on what consent means, we had no conversations about it as kids. No one sat and gave a teenager “the talk” about consent.

Nonetheless, Amr Adib, a well-known TV show host, talked about consent and marital rape. Adib, whose live TV show is watched by a lot of people from all social and economic layers, explained the concept of consent simply. “No means NO. No man should ever force a woman to have sex with him. Even if she is your girlfriend, your fiancée, or even your wife. If she says no, that’s it. Personally, I felt overwhelmed and had chills all over when I heard this on TV.

This episode felt like a win for women. Since the media doesn’t discuss consent, especially when it comes to a TV show with a big audience like Adib’s.

On July 3rd, people started contacting EU Business School to let them know about Zaki’s crimes. The University replied and told them that after looking into Ahmed Zaki’s case, they first suspended him on July 1st. Then they officially expelled him after looking more into the case and the allegations against him.

Tired Of All This Bad News? Here Is Some Good News

On the night of July 4th, the sexual predator Ahmed Bassam Zaki was arrested and held into custody. After that, The National Council for Women started encouraging the victims to report Zaki in order to get their justice. NCW assured victims that their identities will remain anonymous. More than 10 girls started contacting The Council’s lawyers and came forward to report their cases and testify against him.

After testifying, a victim shared her experience with the judge who listened to her story. She loved how supportive the judge was. They did not try to discredit her or blame her for what happened to her. 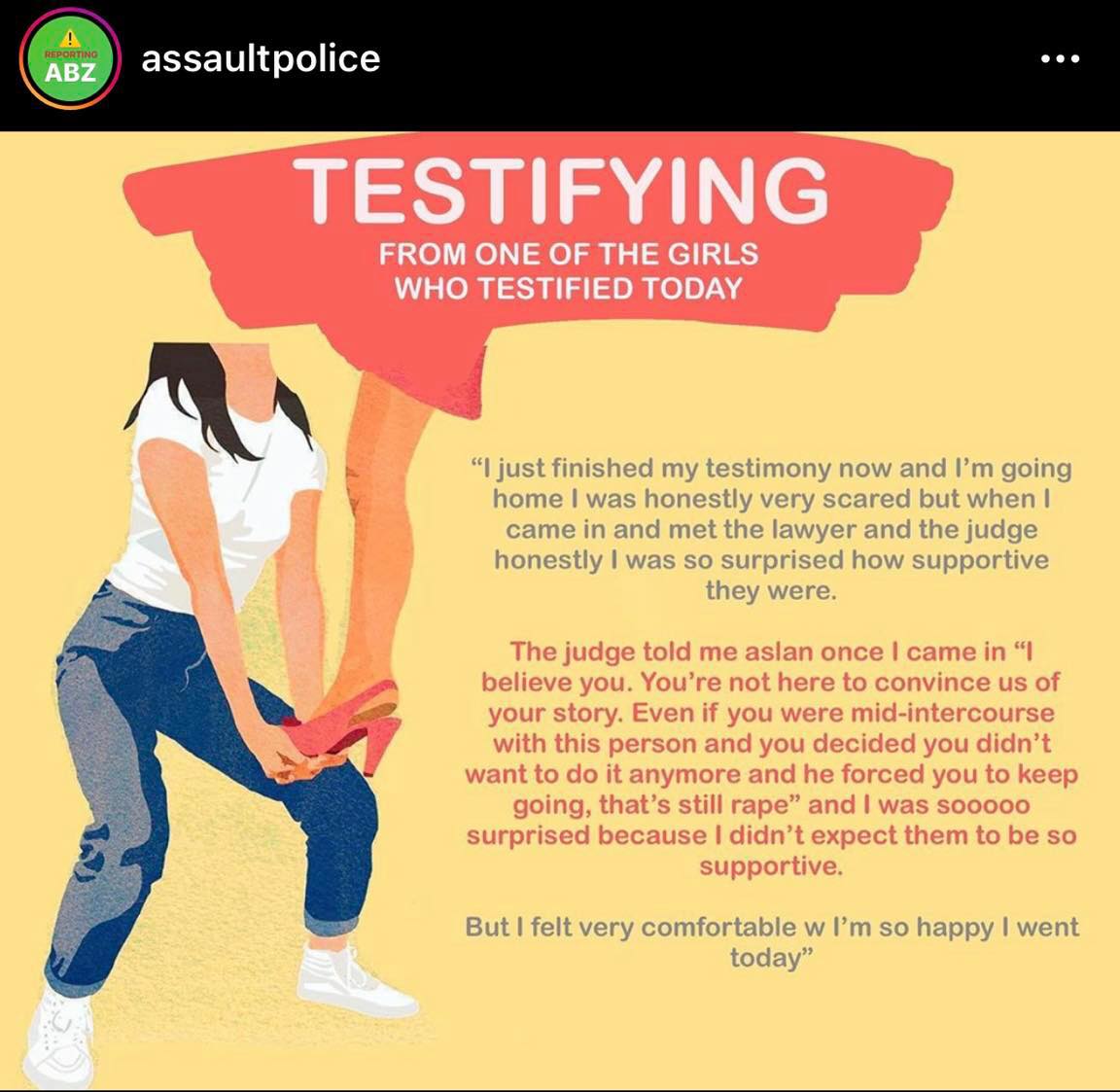 On July 6th, The Egyptian Public Prosecution issued a statement regarding Zaki’s case and the investigations of his crimes. According to the official statement, the serial harasser confessed to his crimes. He confessed to blackmailing 6 girls whom he used their nudes against them when they wanted to cut him off. Zaki is now under arrest for 15 days for investigation. More girls are still coming forward to report against him.

We are currently waiting on the final results of the investigations of his case and the charges pressed against him. Hopefully, justice will be served.

Things Are About To Change

Even though things are still bad in Egypt and the MENA region for women, some believe that this won’t be the case for long. After watching Zaki’s case closely, a lot of women -including myself- now feel more powerful than ever. I finally realize that no man will ever get a grip on me without facing the legal consequences of his crimes.

Above all, girls on Twitter, Facebook, and Instagram explained how they realize that now, no man will ever get away with his crimes against them. The law is now on our side, despite the patriarchal customs and traditions. Some even felt encouraged to expose their abusers on Twitter and to sue them.

Following this case, The National Women Council in Egypt received over 400 new sexual complaints in just 5 days. Women in Egypt are finally heard, listened to, and getting the justice they deserve. This is just the start of a massive revolution for Egyptian women, which was first established by Egyptian feminists over the years. Without them, we would never be where we are today.

America – And The Rest Of The World As A Footnote

Contributing Writer
Hi, I am a journalist in the making at MUST university in Egypt. I write about feminism and human rights.