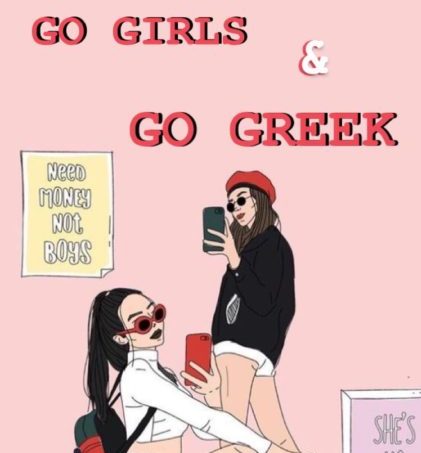 First of all, congrats on attending a university! Finding new friends and expanding your circles is a hard feat in itself. You should be proud of having the mindset of wanting to be part of something bigger, but I don’t want you to limit yourself because it’s easier or enticing. Here are some things to think about.

It’s empowering to join an institution made for women, but there is a lot of history behind it. It’s important to remember that Panhellenic sororities were not made for you.

Over time, chapters have changed their stances on diversity and inclusion. However, this doesn’t change the fact that sororities had to be made for different ethnic groups. The institution you want to join has discriminated against women who look like you in the past.

Even if you do have the means to pay the thousands of dollars set by an HWI, this financial commitment was instituted to create class division.

If you are set on going through recruitment, there are a lot of things to consider.

Ask yourself why you are joining

For me, I went through recruitment during my second year of college. I had just changed my major, and it ended up being on a different campus. Any resources and friends I had made through the dorm my freshman year couldn’t be translated to the campus my major was on for the rest of college.

I wanted to make friends and get involved easily and quickly. It also doesn’t help that the career I want to go into relies on lots of connections. Being a first-generation American, I didn’t have that.

On top of all that, I’m an introvert. Making friends out of strangers is not a fun or easy time for me. It was an attractive idea to have hundreds of girls be your ride-or-dies. Also, having multiple mandatory events would be a reminder for me to leave my room and be social.

Do research on campus organizations

The truth is, a sorority isn’t needed to push yourself forward.

If you want to be involved in your major, look for those organizations. Know what clubs your college promotes. Book clubs, sustainability organizations, and grassroots campaigns all exist at universities. Look for local organizations in the state or city you’re in!

Wanting to be in a sorority isn’t a bad thing, I just want you to make sure you are also aware of all the cool things that exist beyond greek life. There’s no harm in double-dipping either.

You can rep your letters and be involved on and off-campus.

Being in the Queer Black, Indigenous, Women of Color Community

I’m going to be honest: it’s really weird. I grew up in predominantly white spaces, and joining a sorority was still a culture shock.

It’s nice to think of yourself as someone who isn’t a token and as an equal amongst your sorority sisters, but it’s also hard not to notice you stand out in a sea of white girls. If you can count on one hand how many people there are who are BIWOC, it’s even harder to note the number of people who share your same race or ethnicity.

As for being queer, it’s difficult. Most of them aren’t used to being in proximity to a woman who isn’t straight. Comments on an Instagram post might make them feel uncomfortable, even if they support you as a sister.

You shouldn’t have to compromise yourself to feel welcome.

So why am I still in a sorority?

I hate hearing someone say “that’s for white people.”

As much as I appreciate the greek letter organizations made for different ethnic groups, I didn’t want to join something based on my identity. I’ll infiltrate as many straight white spaces as I can to make room for people like me.

A lot of the BIWOC I’ve met have tried to make their greek family lineage look like them. It may not seem like a huge step forward, but there are girls who are trying to make the change for themselves.

Even though a lot of chapters are disbanding legacies, a lot of BIWOC were hoping their future family members could also be a part of their sororities.

I’ve had to live paycheck to paycheck just to pay my dues. It might have been the capitalist propaganda, but I feel accomplished knowing I was able to pay for something by myself. It’s not easy knowing a majority of greek life have their parents pay for everything.

When I went through recruitment, a sorority alum told her coming out story and how she did it in front of her chapter. Seeing that made it easier for me to choose which sorority I wanted to be a part of.

I’ve had a hard time being open with my sexuality, but knowing there are other girls who were comfortable enough to kiss their girlfriends at formal makes it a lot less scary.

Being in a sorority that aligns with your values makes it seem like everyone is the same. They’re not. You can have the same priorities in life, but that doesn’t mean you aren’t your own person.

A lot of people make the mistake of thinking they’ll be best friends with every single girl in their chapter. Maybe you might! But let’s not dwell on that hope.

If you do go through recruitment, you should look for people you feel comfortable with. Once you’re in a chapter, don’t stop that search.

I’ve met a lot of friends through my sorority and I can’t ignore the fun memories I’ve had. Like anything in life, you should make the most out of your experiences and make sure it works for you.

You’ll find people in your sorority that share the same political views, the same hobbies, and the same taste of music. If you can’t, there are always options outside of greek life. Don’t forget that.

Read also:
Walk Beside Me And Be My Sister? The Truth About Sororities And What Should Be Done About Women In Greek Life
‘Sometimes Change Is Forced’: How Greek Life Acknowledges A Culture Of Intolerance
What’s The Real Case Behind False Rape Accusations?

The Massaru Tax – Period: An Interview With Shafa Rameez

Is It Sex Work Or Just A Job?

Kim Alexis is a senior studying Political Science and History at Arizona State University. Her interests include scrolling through Twitter, watching shows on Netflix, and questioning the systems-that-be with her friends.