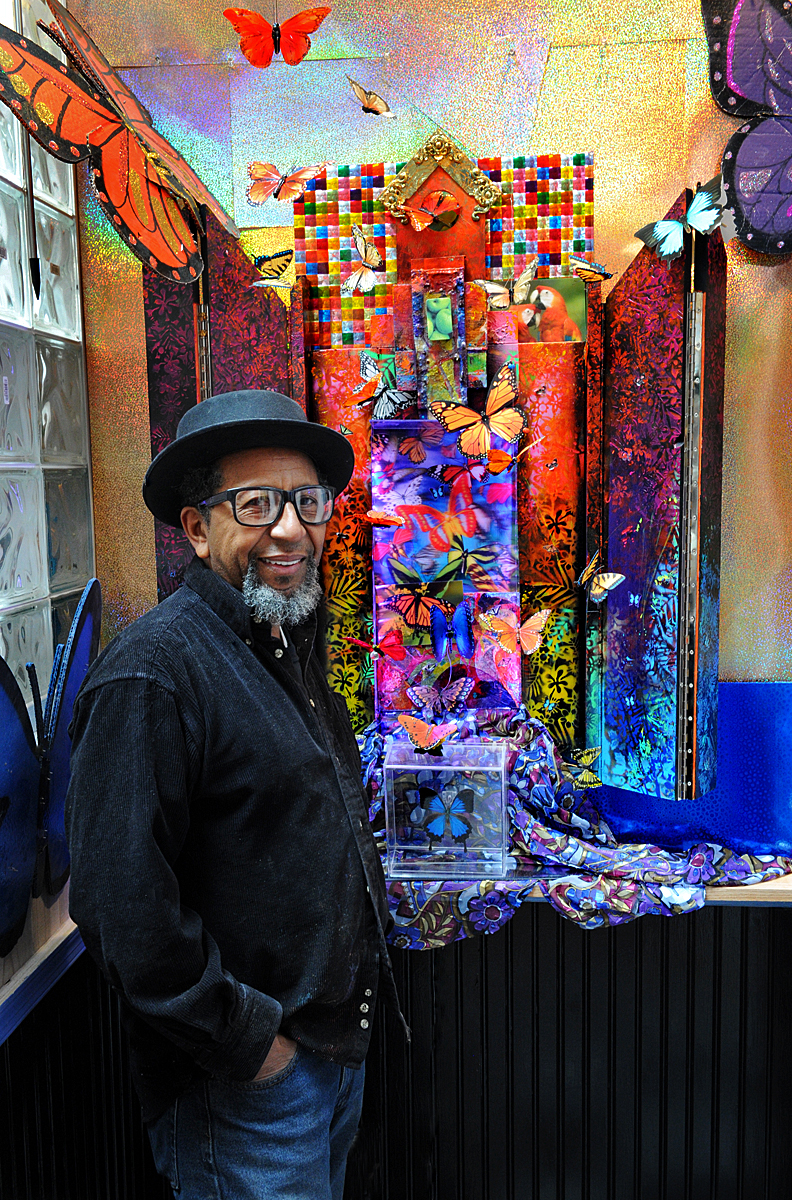 James Dupree in his Philadelphia studio and home.

The managing director of the city of Philadelphia, Brian Abernathy, has just resigned due to community pressure. His resignation has come at a time of great unrest, as the city of Philadelphia has proposed a new budget for 2020/21. Philadelphia is a city full of hard-working community organizers. A new group has formed due to this important resignation: Artists Against Abernathy.  I immediately knew that I wanted to support them, but I wasn’t sure where to start.

When I clicked on their website, the quote above their letter of demands struck me. It read “I was dumbfounded by how out of touch I truly was… and how I had underestimated the anger and rage and frustration of folks I’m hired to serve.” Brian Abernathy said this. Abernathy perpetuated harm for years in this position of power, and he was not held accountable for his actions. As I continued to read, I learned many things about Abernathy‘s character and actions.

Wait…Who are the Artists Against Abernathy?

Before I begin unpacking the incredibly harmful, violent and dehumanizing history of Abernathy‘s actions, I want to quote the first two sentences of Artists Against Abernathy‘s letter of demands because it is so beautiful: “We are artists of Philadelphia, united in our work of maintaining and building the cultural legacy of our beloved city. We are performers, writers, painters, musicians, organizers, librarians, chefs, nonprofit administrators, and everyone in between”. These are the people who are fighting for a better government.

Abernathy and the Police Department, Sittin’ in a Tree…

Abernathy has a history of protecting the police in a diverse city with large Black, Brown, and immigrant populations. Under his management, the police department continues to hide officers’ names and badges, preventing accountability and limiting media ability to cover police wrongdoing. Even during protests with a heavy police presence, officers covered their badges so that protesters could not report the names of the officers and their wrongdoings. Abernathy is directly linked to this violence.

His relationship with the police continues beyond this as well.  He negotiated the city’s contract with a private company to purchase body cameras for police officers. Abernathy signed a four-year, no competition/no-bid, $12.5 million contract with Axon. He overpaid by over 400% compared to contracts with Axon in other cities. If police officers are covering their badges, how can we expect them to keep their body cameras on? Why are we putting more money towards a murderous police force instead of back into communities?

Widespread protests across Philadelphia for the Black Lives Matter movement and housing rights have been met with inexcusable force from the police. Abernathy was a member of the Unified Command group. They were involved in the deployment of teargas on peaceful protesters on I-676 and crowds of teenagers on 52nd Street. Abernathy, in an exchange with City Councilwoman Helen Gym, explained that the Unified Command group formed Saturday, May 30, on the first day of mass protests. This group, including Mayor Jim Kenney, the police commissioner, the fire commissioner, and several other high-ranking members of the mayor’s administration, signed off on this use of tear gas.

Abernathy claims that the use of teargas on demonstrators was left to police supervisors on the ground. Clearly, this was an attempt to blame the violence on the police instead of acknowledging his direct involvement.

Abernathy also tried to make block party applications the responsibility of the police department. He restricted permits for neighborhoods with “public safety concerns” and banned 922 streets from having block parties. He’s clearly intent on increasing police presence in black and brown neighborhoods, which only makes police brutality worse. The police cannot solve the problem of police brutality.

Of Course, He Loves ICE As Well

His support of the police and desire to control communities and maintain power continues in his relationship with ICE.  On five separate occasions, Abernathy called ICE to inform them of people without documentation being released from jail, violating city policy, mayoral directives, and Philadelphia’s sanctuary status.

The 2001 Police Commissioner Memorandum prohibits police officers from disclosing immigration status to federal immigration authorities. This is unless the person is “suspected of engaging in criminal activities”. In 2009, Mayor Nutter signed executive order 8.09. This prohibited officers from asking Philadelphians about immigration status or disclosing that status to ICE without ICE proving a federal judicial warrant for a violent crime. In 2014, another executive order signed by Nutter prohibited Philadelphia police from detaining people for ICE (ICE Holds), and turning over Philadelphians with no criminal convictions to ICE. Abernathy has said that officers are not prohibited from sharing information with ICE on someone’s immigration status if the officer “somehow learned it”, or if the person was “suspected” of a crime. With Abernathy in this position of leadership, it is no surprise that the Philadelphia ICE field office “arrests more immigrants without criminal convictions than any other ICE region”.

Artists are demanding transparency and community involvement in the hiring of Philadelphia’s next managing director.

Law enforcement love affair aside, Abernathy has done a slew of other problematic things, including attacking community art. When he was the executive director of the Philadelphia Redistribution Authority, the organization tried to use eminent domain to seize James Dupree’s art studio in Mantua. In an interview, Dupree said he spent nine years turning the space into a working art studio and put thousands of dollars into his property. Abernathy wanted to demolish this work of art and put a grocery store and parking lot in its place.

A post on Artists against Abernathy‘s Instagram page explained “Part of holding Abernathy accountable is making the public aware of the harm he’s perpetuated”. And, he has perpetuated a lot of harm.

Philly’s New Budget is a Chance for Change

The reason Artists Against Abernathy is so determined is because Philadelphia‘s new budget has shifted $14 million away from the Philadelphia Police Department. Instead, this $14 million will be filtered through the managing director’s office. The managing director’s office has also taken over the leadership of the Philadelphia Cultural Fund. In the midst of a pandemic, Abernathy helped craft this budget, which decreased the city’s affordable housing by $12 million and completely defunded the arts.

Artists Against Abernathy explained “From police accountability to the safe management of our cultural sector, the managing director’s office overseas so much of what is currently at stake in our community…We cannot allow another Brian Abernathy to wield power over the community-building and cultural enrichment we strive so hard to create and maintain. We cannot allow the lives of our Black and Brown neighbors to be under attack any longer.”

Artists Will Reimagine Philly…And the World

In their letter, they explain that artists are fantastic at imagining ways forward and that they should be hired as facilitators. They challenge Mayor Jim Kenney and members of the Mayor’s Council and City Council to make a space for Philadelphia’s creative and cultural workers to engage in decisions that require the visioning processes that artists excel at. They end this demand with “Let us help create a better future, so we don’t repeat the harms of the past.”

The ending is an incredible reminder: “We hope you remember it is our tax dollars that pay for your salaries. You are all in positions of service to the citizens of Philadelphia. We will be watching to make sure Brian Abernathy steps down, and we will be watching to make sure what happens next is an ethical and equitable way forward.” Over and over again, the people in power act exclusively on their self-interests instead of serving the people. This has to change, and it starts with the managing director.

If you’re able, please consider reading the full letter. Also, consider adding your signature as an artist who supports the demands of Artists Against Abernathy. You don’t have to be from Philadelphia to sign! In order to change the corrupt ways of Philadelphia’s managing director position, we need all the help we can get. Please follow @artistsagainstabernathy on Instagram. They are providing updates on the fight for justice and how you can help!

Read also:
Why Is Police Brutality Still An Issue In 2020?
America Is Burning
A Tale Of Two Police Raids

How Music Videos Are Toxic To Female Empowerment