August 18th, 2020, marked the 100 year anniversary of the 19th amendment passing into law. Tennessee, my home state, was the 36th state to ratify the amendment. To commemorate this centenary, many state-wide celebrations of this step towards justice took place.

However, Tennessee, and the entire United States, has a duty to recognize the shadows of August 18th, 1920. We must gravely remember that the 19th amendment did not protect Black women’s right to vote in the United States. Jim Crow laws and other racist practices at polling booths often barred Black women from exercising their right to vote.

With these reminders, the 18th provides an opportunity to reflect on progress, shortcomings, and future work. Kristin Luna and her partner established DMA-events, a Tullahoma-based 501(c)(3), in May 2018. They have curated more than 20 murals over the past 2.5 years.

This year, DMA-events launched the Walls for Women campaign in hopes of commemorating women’s suffrage and amplifying female muralists’ voices in paint. Curated by Kristin Luna and her team, artists Sarah Painter and Cymone Wilder painted a new mural in Nashville titled Seeds. Kristin and her team claim that the Nashville-based mural was their “biggest, most ambitious project yet!” Completed on the 18th, the mural symbolizes the continued fight for justice for Black women’s rights.

Drawn from personal interviews, here’s a deeper look into the artists’ thoughts, the new mural in Nashville, and messages behind the paint. As an important reminder, these words are my interpretations supplemented by discussions with the artists. An incredible aspect of art is that an image ‘can speak a thousand words,’ communicating different messages to every viewer. So, let the mural speak to you. 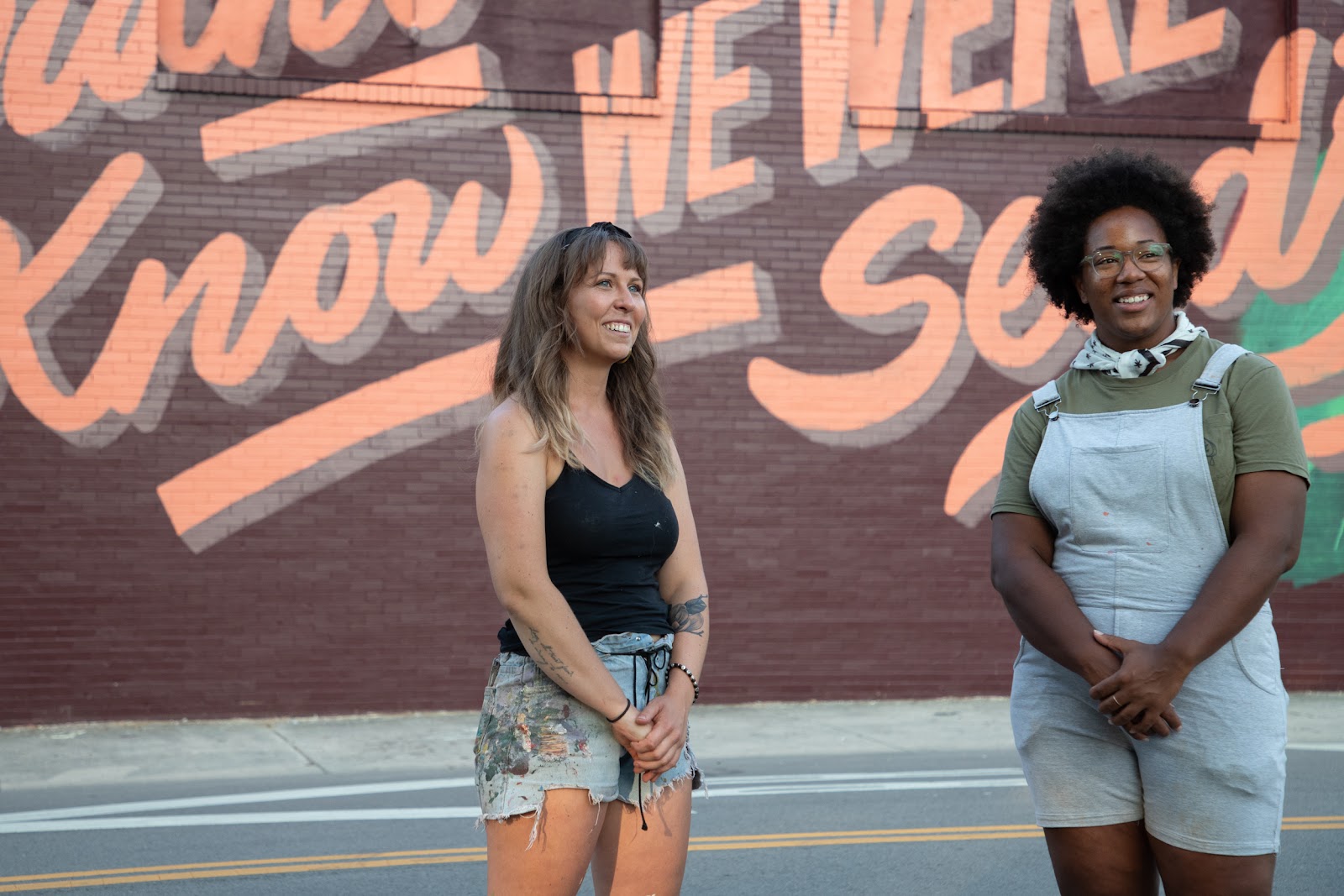 Sarah has been a full-time muralist for almost four years, usually working alongside her partner.  So, collaborative murals are nothing new for her! She was initially drawn to mural painting due to its unique ability to communicate public messages. She believes that “you can really make a statement with a mural,” and she has spread these messages around the globe.

From Haiti to New Jersey, Toronto to Nashville, her work carries evident themes of childhood innocence, beauty in perseverance, and struggles for justice. Check out more of her murals on Instagram @sarahpainter and order digital prints on her online shop. 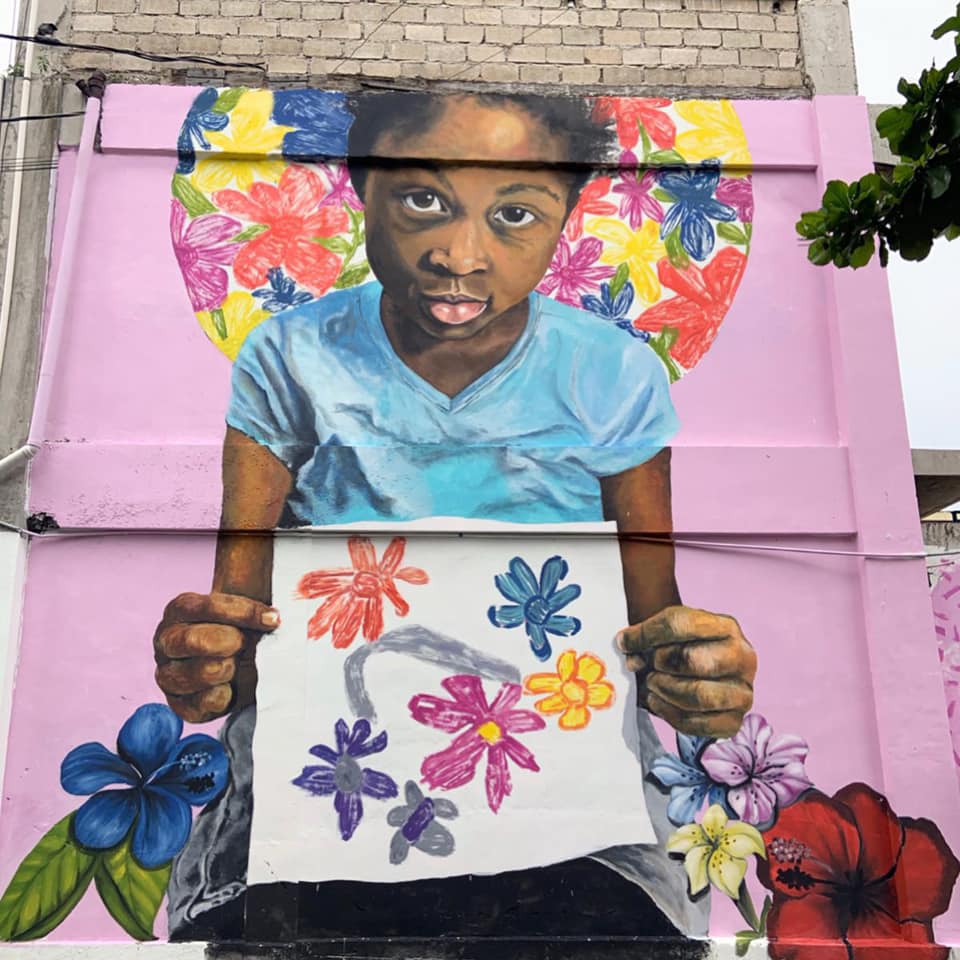 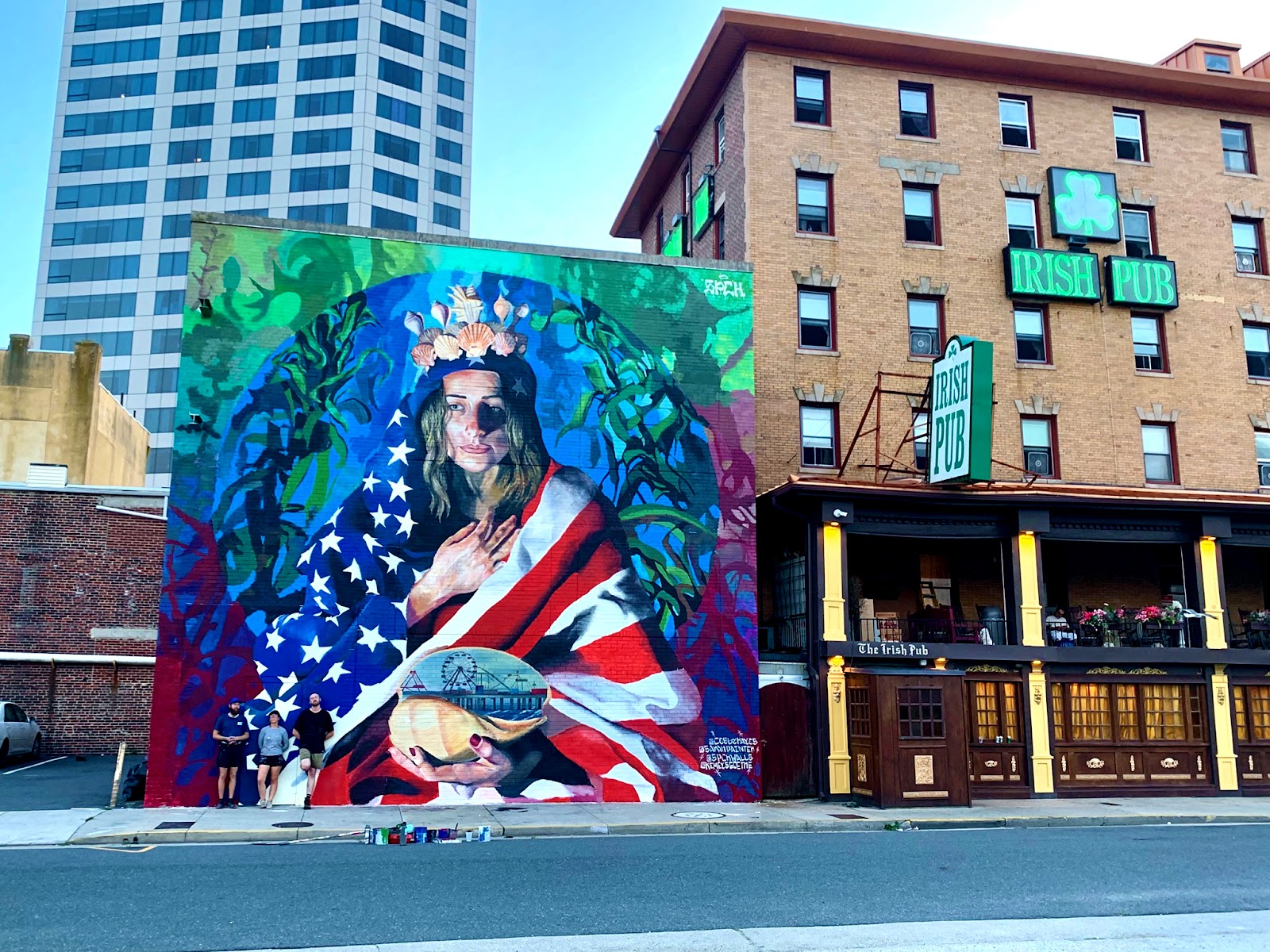 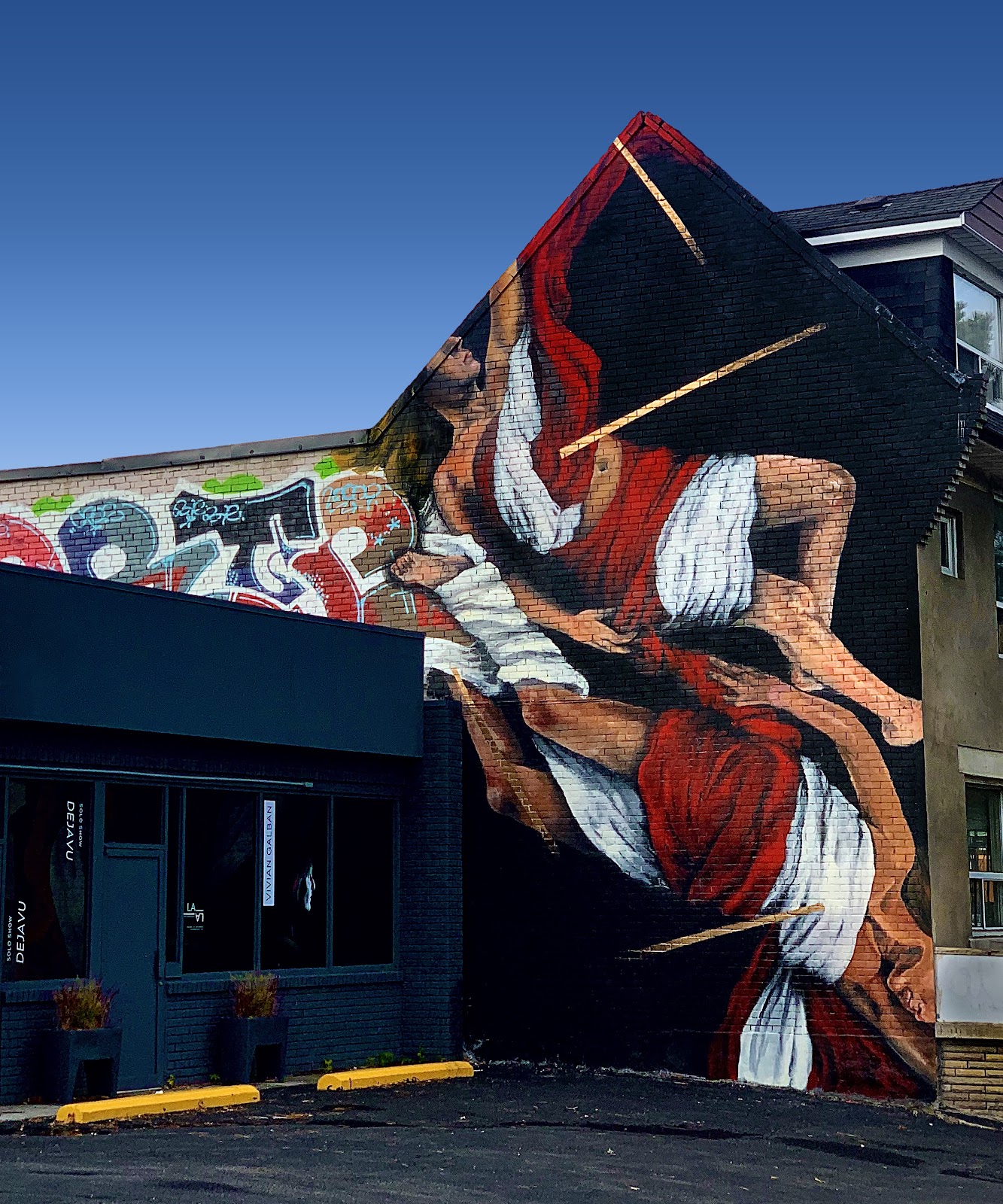 Cymone is a full-time brand designer, with a “sweet spot” for lettering. In the past few years, she has been drawn to freelance lettering gigs, collaborating with big names such as the Elizabeth Warren campaign and Cosmopolitan. Design is  “in her bones” – her father was a natural creator, but he never had the ability to pursue art full time.

Wilder feels driven and blessed to center her career around design. Her lettering calls for justice, activism, and compassion, often centered around the Black experience. See more of her work below, on her Instagram @simonandmoose, and at her online shop that features custom stickers and pins. 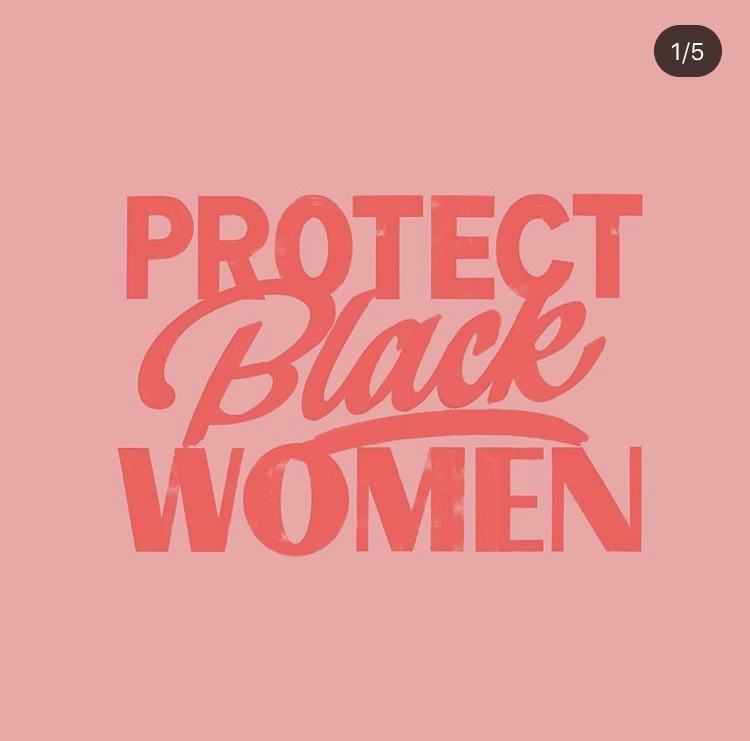 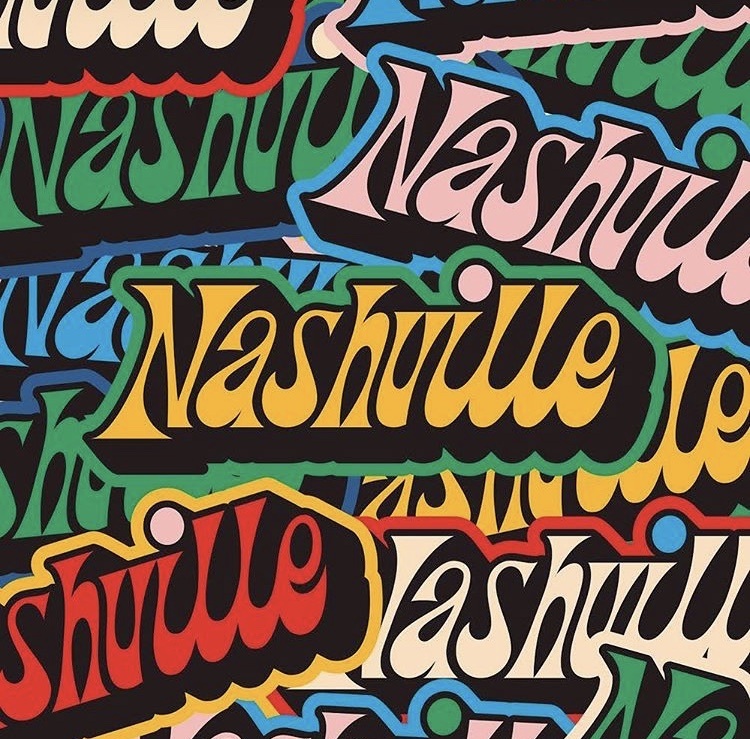 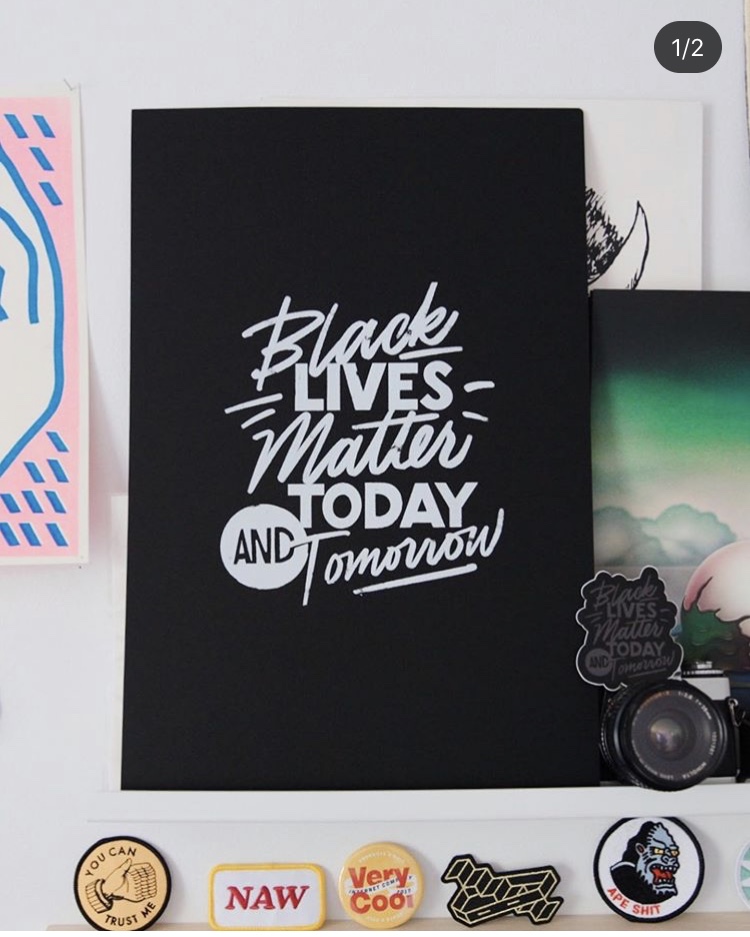 Luna, the curator, prioritizes giving muralists complete freedom in their artistic expression. So, it was up to Cymone and Sarah to decide how to fill the 170-foot wall on the side of a local pub, Nelson Green Brier. Importantly, this pub sits within a historically Black neighborhood, bordering Marathon Village, a newly popular tourist destination. When beginning their collaboration, the muralists asked themselves one important question: “In this mural, how do we apply women’s suffrage to today’s world to continue that conversation?

Despite Cymose and Sarah’s distinctly different styles, they were on the same page; they wanted to reflect Black women’s generational fight for justice.

Following this goal, the muralists brought Seeds to life. With intent in their eyes and surrounded by roses, Sarah painted the faces of a Black woman and a Black girl. Stretching between the two faces, Cymone lettered, “They buried us, but they didn’t know we were seeds.” 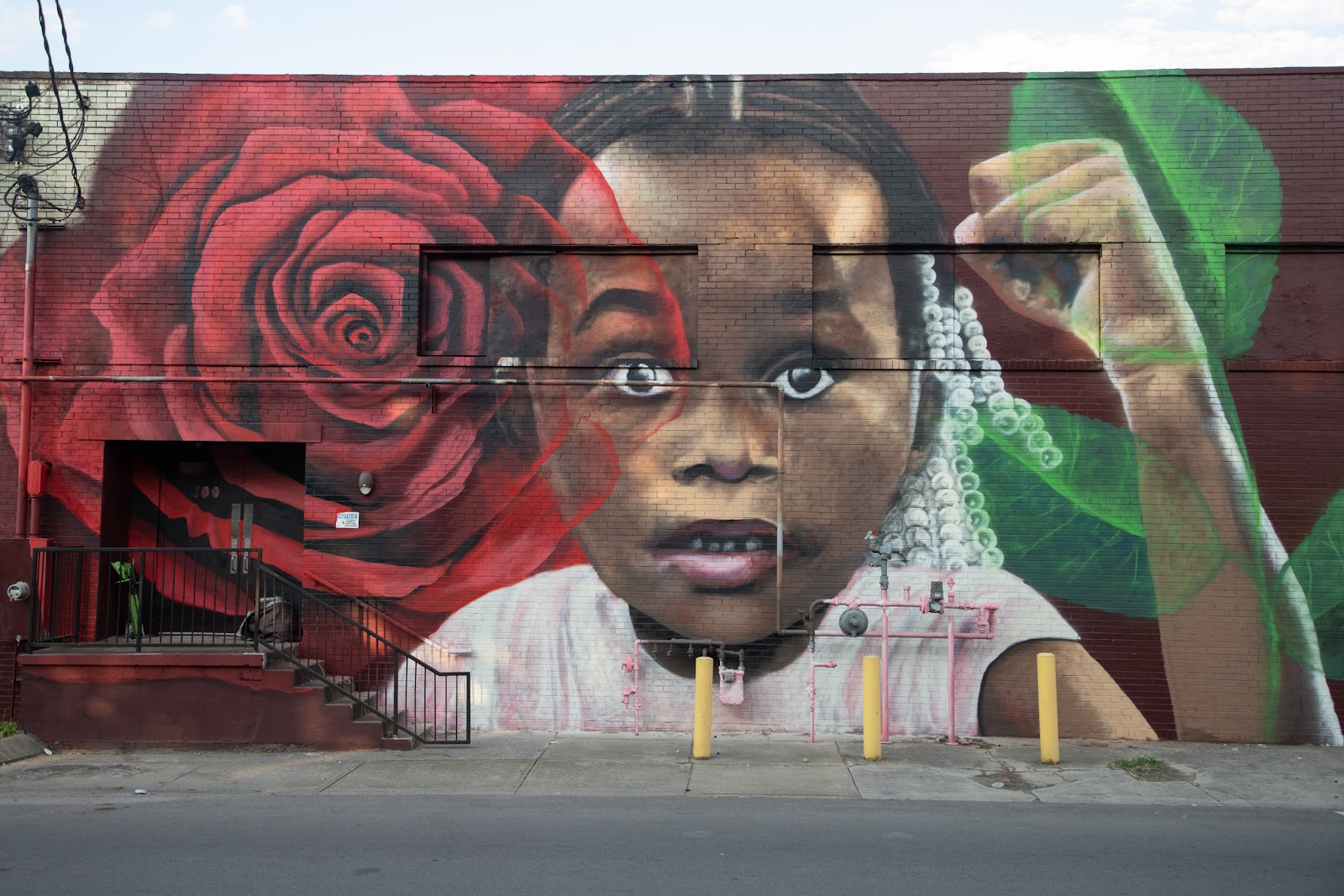 The image of the little girl is a still from a viral video of a young protestor, Wynta-Amor Rogers. In the video, the young girl holds a strong look of conviction and chants, ‘No Justice, No Peace.’ Rogers leads a crowd at a Black Lives Matter protest, sparked in response to increased media coverage of brutal police brutality against Black individuals.

Sarah chose to paint Miss Wynta-Amor Rogers because the image of a young protestor fills us with discordant emotions: both inspiring and sad. We draw inspiration from the energy of our emerging generation, yet mourn the childhood innocence that racial injustice steals. 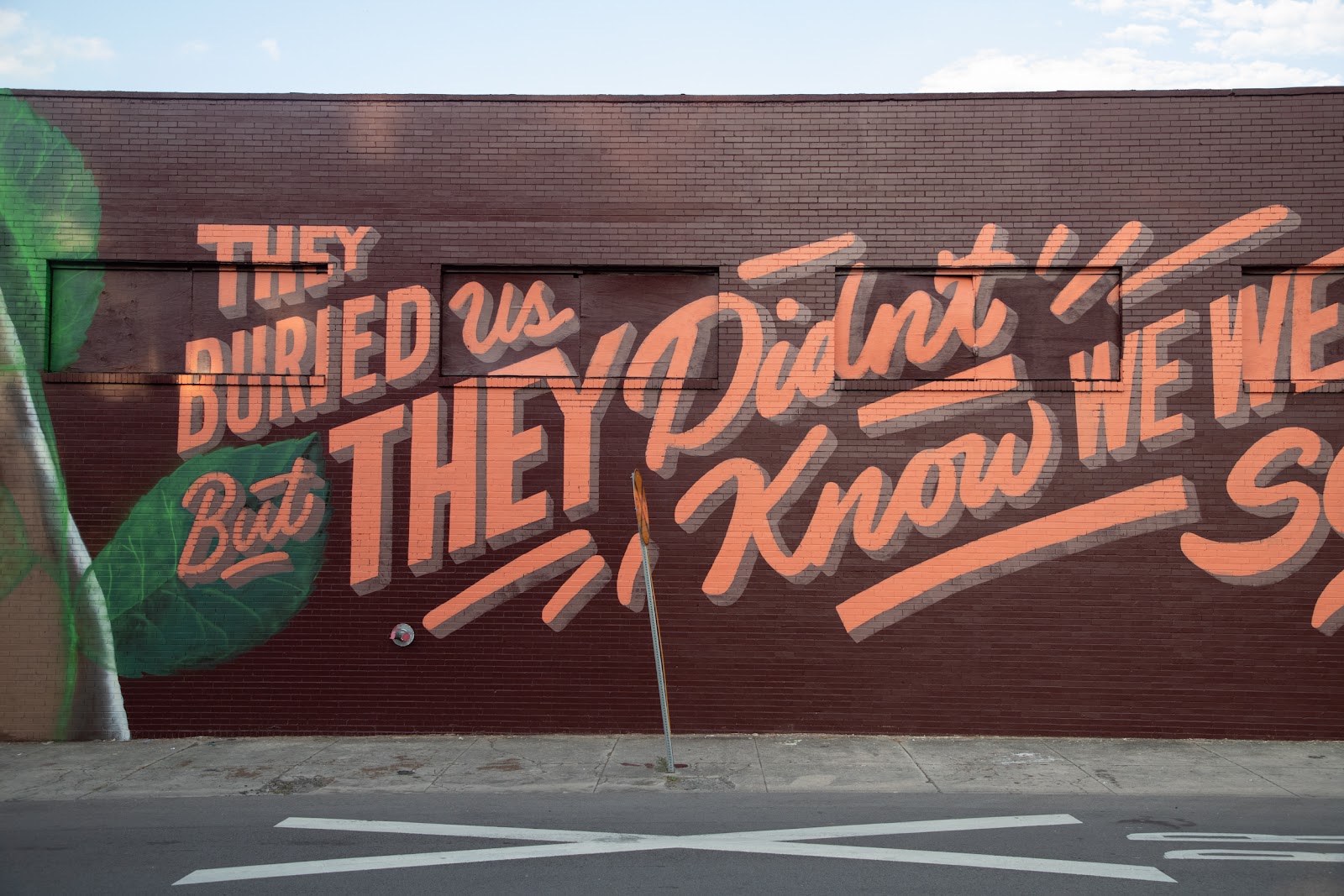 Cymone has always loved the ‘seeds’ quote and had been wanting to publicly display it for several years. When framed by the portraits, she felt that the quote truly came alive. You can pan from the quote to the shared look of intent in the woman’s and girl’s eyes, showing a determination to rise despite generations of oppression that has tried to bury them.

Here is how the muralists responded when asked the impact they hope the wall leaves.

“I hope people look at it as a sign for how far we’ve come, where we are now, and where we plan to move for the future. A lot of progress still needs to be made, but it is still okay to celebrate our achievements thus far. ” Sarah

“This mural is so important in this specific location. It is literally sitting on a building that kind of acts as a boundary between two different worlds. I’m hoping this mural can bridge the gap and keep fresh in people’s minds, especially the tourist community coming through here, the issues that we continue to face and to not stop until the issues are fixed. Additionally, a lot of the Black community here is feeling the push of gentrification. It is important to have these two giant Black faces that the kids can see on a daily basis and the community can feel proud to have.”  Cymone

Learn more about the Black women in the Suffrage movement and share with others.

Read Also:
Love With Nowhere To Go: How Writing Poetry Can Help Women Of Color Grieve
A Look Into Roxanne Gay’s Bad Feminist
How Fighting Racism Benefits Everyone

How The Phrase “Daddy Issues” Is Harming Women

Margaret is a senior at Vanderbilt University, majoring in Human and Organizational Development and minoring in Psychology. Last semester, she interned at an independent domestic abuse support center in London. This semester, she is completing her undergraduate thesis on college women's leadership development and preparing to start an internship at the Jean Crowe advocacy center to support individuals experiencing abuse.