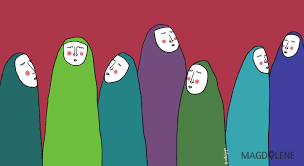 “Islam is not a feminist religion, because the second wave of Feminism advocates for women having more rights than men”. Wait-WHAT? Rewind. Pause. That was my reaction to when I was being mansplained to regarding feminism and its relationship to Islam. One of the most frustrating parts of being a Feminist Muslim woman is seeing the lack of narrative between the feminist movement and Islam. It’s disheartening to see rhetoric where people do not believe that Islam is a feminist religion when in reality it was a major leading factor in the feminist movement. Feminism and its’ relationship to Islam is one of the most controversial topics. Many of whom oppose that a tie exists between the two, are either mistaken of the definition of feminism or the representation of women within the religion.

Feminism is defined as the social, economic, and political equality of the sexes. People often confuse this struggle as feminists wanting more rights than men or paint it as a campaign to threaten the livelihood of men. The truth is that feminists are fighting for equality between the sexes, however, these goals vary throughout times and cultures. In the United States, these historical variations are called “waves of feminism”. The first wave of feminism occurred from 1900 to 1959 and focused on suffrage and property rights. The second wave of feminism occurred during the 1960s to 1980s advocated for equality in the workplace and for reproductive rights. The aftershocks of this movement are still prevalent today with the feminist movement advocating for equitable wages and female health. The third wave of feminism advances intersectionality within the definition of feminism. It advocates to include the narratives of LGBTQIA+, especially trans women, and women of color. Lastly, the fourth wave of feminism started in 2008 and is currently still occurring; it focuses on sexual harassment and assault. This can be seen through the Me Too movement; as well as, the inclusion of the visibility of sex crimes towards trans women (although the representation still lacks). These waves show a brief outlook into the history of the American feminist movement and briefly encapsulate what the feminist movement stands for.

At the time of its reveal (7th century AD), Islam was extremely progressive towards race and sex-based issues. Islam advocated against female infanticide- the killing of female babies at birth due to cultural preferences towards males. It also advocated for women having property rights, marriage rights, suffrage rights and the ability to own businesses. These rights were granted centuries before European countries, making Islamic society incredibly progressive for its time. An example of this can be seen through the Prophet Muhammad’s wife, Khadija, who owned property, worked to support the Prophet Muhammed and was the one to propose to the Prophet. She was a successful businesswoman and the Prophet Muhammed was her employee, going against patriarchal norms that were prevalent in surrounding societies. Furthermore, the Prophet aided to liberate women in the realm of marriage by including their voices when dealing with marriages. Women, prior to Muhammed, did not have a say in her marriage, nor the ability to use her dowry. The Prophet Muhammed made it so that the dowry would go to the bride, giving her the ability to use it in any way she pleases; as well as, the ability to divorce their husbands where she would also be able to take her dowry. Women, at that time, also became the first to inherit assets which was an extraordinary leap for the time period.  Even until his last sermon, the Prophet Muhammed sought to uplift women and elucidated them as equitable partners to men. After his death, Muhammed’s wives played a leading role in the culmination of surahs and hadiths to canonize the Qur’an as a text. Even the first words of each surah (except for surah 9), bode the words Bismillah al Rahman al Rahim, which is most often translated as “In the Name of God, all compassionate, all merciful”. It can also be translated to  “In the Name of the One who births compassion and mercy from the womb,” due to the root of the word Raham which is translated as the womb. This furthers the notion that Islam is a gender-neutral religion; it does not solely sway to be masculine. Moreover, there are multitudes of instances where the Prophet also talks about respecting women, when he says, “Paradise is under your mother’s feet”, “Verily, women are the twin halves of men”, and “Lucky is the woman whose first child is a daughter.”

One can see from the history of Islam and it’s a drive to healing the social injustices of society, that it is a feminist religion. It advocates for the social, political and economic equality of the sexes by advocating for women’s abilities to vote, own property, and work; Islam was far ahead of other societies in regards to feminist issues. Including feminist narratives in discussions of Islam is not changing or adding to the religion, rather it is rediscovering the ideologies that have always been there.

Yusra Siddique
Yusra Siddique is a 2nd year Political Science major with an emphasis in International Affairs at University of California-Riverside. She is passionate about Higher Education and Title iX policies and has advocated on the local, state and federal level. She has also had the opportunity to be a contributor to CNN. Yusra also enjoys traveling and going to museums! If you have any questions or comments, please feel free to email her at ysidd004@ucr.edu. IG: @yusrasiddique Twitter: @yusrasiddique98

The Type of Sexual Assault We Don’t Talk About: Coercion 18188

5 Reasons Why You SHOULD Date Indian Girls 14669

Colorism And Anti-Blackness In The Asian Community 10919