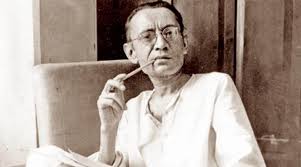 This can be attributed to the high turn over rates from graduation to set-careers in these disciplines, combined with the impending financial burdens of being first-generation immigrants, looking for solid ground to build their futures. As a result, higher education in fields like literature/poetry, struggle to stand as an institution for self-formation and discovery or a tool to cultivate a career. Degrees in liberal arts fields, like literature, are highly stigmatized and even disregarded because they are not “monetarily substantial.”

But upon delving deeper into my interests in rich literature of the region, I become conscious of the paradoxes that exist in this dynamic. The very nation that can be attributed to the rise of the greatest poets/writers of all time, are the very same people who now negate the utility of this art.
This article hopes to serve as a baseline for all who are anonymous to the genius of these few individuals.

To begin with, galvanizing writers like Sa’daat Hassan Manto, Ismat Chughtai, Khadija Mastur, Qurratulain Hyder and Intizar Husain who have forever changed the censorship that once bore over literature and the freedom to express. These writers are a part of a discourse that not only remembers the violent history of the greatest mass migration ever but also perfectly encapsulates the idiosyncratic messages the culture that the subcontinent entailed.

Throughout this article, I hope to provide those who don’t know of these prolific writers a brief introduction to their “kirdar” and the revolutions they sparked.

A unique time capsule left behind by prolific individuals like Manto, leaving us with details of the “partition culture.” Manto’s descriptive ‘afsanay’ create vivid imagery that prevents us from ever forgetting the gruesome facts of the lives our ancestors lived in the subcontinent. Manto’s works pushed the boundaries of censorship in Pakistan. The taboo truth that he worked to generate discourse made officials and conservatives of the new nation uncomfortable.

But why was it important the truth prevail in a time of mass chaos? Ultimately, Manto worked to showcase the stigmatized “double violence” women faced as a result of these arbitrary lines that now divided two sister nations. He wrote about the journey of the migration itself and how many of these women who remained sheltered their entire lives were now responsible for taking care of their entire families. One of Manto’s better-known stories is titled “Das Rupay” or “Ten Rupees.” It is about a young girl who gets hurdled into child prostitution in order for her family to survive. Manto showcases the exploitation of the wanderlust mind and body of the young girl named Sarita.

This story leaves you, the reader, feeling ephemeral of the small essences around you. The story revolves around Sarita sitting in a nice fancy car with three men. She is amazed by the wind running through her fingers and engulfing her within itself, the feeling of becoming one with the constantly moving, altering force of the wind. She jumps at the taste of ‘freedom.’ Sarita loses any thought of being “commodified” but rather thinks of this car ride as her ever-longing freedom.

Manto’s purpose isn’t to lighten the tragedy of child prostitution/sexual abuse in India, but rather to illuminate the pressure young girls face, in this scenario, to behave like grown women. In Sarita’s case, the innocence of experience that she paradoxically embodies serves as an illustration of a warring binary of events.

“She loved riding a car; when the vehicle sped through empty roads, thewind from outside slapping her face, an unspeakable joy seized her heartand she imagined the car to be an airborne vehicle, flying on the road.”

Halfway through the story, Sarita moves from the back of the car with the two men to the front of the car. She begins to sing with her face towards the wind, breaking the inhibition between the three men which was pronounced from the transactional nature of their meeting. Sarita changes the tone of the entire story here, a perversion from what it seemed to be, this is made possible through her singing and seemingly normal carelessness. Sarita begins to sing.

In this single song, Sarita creates an aura of flight and freedom. An aura that seems to be new to the men in the car with her, and they are so amused by her small curiosities. The men join her in singing along, the altercation losing any element of possible strife or discontent. The scene shifts to creating an element of friendship. We can tell the deeper conveyance of Manto is to showcase the peril that exists within a young girl before she is violated. This young girl hopes of freedom from her present life which constituted as a mode of transaction.

The next author that we owe a eternity of gratitude for their contributions to Urdu literature is Ismat Chughtai. Chughtai is a lesser-known writer who became well known after her stories gained particular attention by the National Censor Board of Pakistan. They categorized her writings as grotesque because she uniquely described femme. She attended the Progressive Writers Association and this sparked her passion for human rights.

Throughout her stories, themes of women empowerment and unapologetic conveyance of the real lives of women shocked many readers and critics. Chughtai’s most prominent work titled “Lihaaf” or “The Quilt.” This story breaks the taboo on the female body. Chughtai received mass amounts of criticism on her ‘bold’ descriptions of the lives of women in India. Chughtai works to fight the suppression of women’s desires in a conservative, patriarchal culture.

Her next short story “Vocation” is part of a larger collection titled “Lifting The Veil.” In this story, the narrator hates women who engage in prostitution and is vehement on being a “noble” and “pure” woman herself. When a ‘tawaif’ moves into her neighbourhood, the narrator begins to expose the realities of how women view other women in a patriarchal society that values purity and submissive behaviour. Chughtai effortlessly engages the reader to reflect on both the thoughts of the narrator and the tawaif. Expressing female sexuality and the taboos that surround music and dance are explored in this short story while subjecting the internalized misogyny so many men and women occupy.

Lastly, the domain of literature itself perfectly encapsulates poets who woefully engaged all of our emotions and so eloquently placed them in context. One of these poets is the well known Allama Mohammad Iqbal. Iqbal explored philosophical and political dilemmas through his poems and verses. He examined ideas that are still pertinent to discourse in modern thought of the exploring the universe and the existential realms of thought we as individuals occupy. His thoughts encouraged questions and criticism, he wanted to spark discussion and meaning of the world we live in.

Iqbal advocated pan-Islamism and de-racialization of Islam to create unity and growth as post-colonial nations in the form of uniting through religion. He advocated removing any shadow of Arab imperialism seen throughout history as these were not correct representations of Islam. However idealistic this thought may seem now, it was a seen as quite a radical and dynamic view of pan-Islamism.

The concept of providing independent judgement or ijtihad, was a vision Iqbal embodied throughout all his writings.

Keeping up with the theme of polemic pieces, Iqbal’s two pieces titled, “Shikwa” and “Jawab-i-Shikwah” which translate to “Complaint” and “Response to the complaint” are works that readers of Iqbal are all too familiar with.

Written in 1909, “Shikwa” carried its poetic essences flawlessly, but the controversy arose within orthodox Muslim communities who saw the piece as disloyal to God and questioning the moral authority. In this piece, Iqbal simply explains the moral positions of Muslims. He asks God, why do the worshippers suffer? He questions the ummah’s collective shortcomings and misguided piety. Iqbal’s complaint was for God, asking him why was the nation losing its “national Muslim identity”? Ironically, Iqbal was questioning why the ‘noble ummah’ was being tested?

“Shall I hear the lament of the nightingale, submissively lending my ear? Am I the rose to suffer its cry in silence year after year? The fire of verse gives me courage and bids me no more to be faint. With dust in my mouth, I am object: to God I make my complaint. Sometimes You favor our rivals and then sometimes with us. You are free. I am sorry to say it so boldly. You are no less fickle than we.”

Iqbal then responds with “Jawab-i-Shikwah” in which he prefaces hope and inspiration to the audience. Here Iqbal becomes rendered a religious authority. Iqbal poses how Allah would respond to his complaints, with an elegant lyrical declaration, the poem states to the ummah that intellect and love are tools and that all that is decimate will always rise, especially those who follow the word of Allah and Muhammad (PBUH). The poem reverberates that you must be an individual of action and with constant contempt, you cannot expect to grow and become moulded into who you are meant to be.

The importance of these pieces of literature is that it invokes deep reflection that is oftentimes neglected in times of instant gratification and narrow analysis. These pieces allow you to see the aspects of the universe that you make up and to ask these questions, to write these poems! We must be the ones to free our minds from conformist thought and mould the minds of the future.

Free young men’s minds from slavery,
And make them mentors of the old.