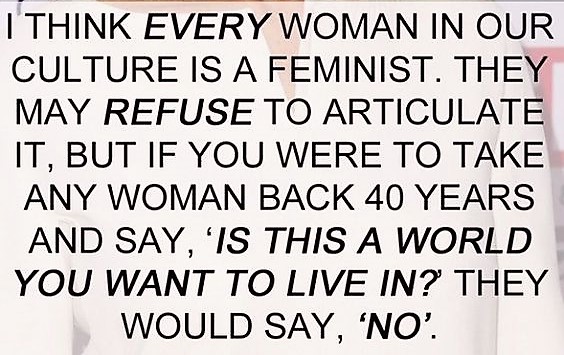 Every time, every single time I come across a feminism related E-magazine, article, or even a feminist’s account on Facebook, Twitter or Instagram, there’s at least one hater hating and throwing useless comments to them for something called “Hating on men” and that point was exactly where one question or say confusion arose on my mind as a result of which I came up with writing about it today. Who told all of you that feminists are a bunch of women hating on “men?”

Feminism, according to the google definition is defined as “a range of political movements, ideologies, and social movements that share a common goal: to define, establish and achieve political, economic, personal and social equality of sexes.”

Yes, that is exactly what it is. We are just a bunch of people seeking equal political, economic, social and educational rights alongside protecting women from all kinds of abuse, mental and physical from everyone, be it a man or men. Well, the amount of rapes, abuses, murders of women by men aren’t a secret so yes, yet however I wouldn’t term it as ALL men but men, simply men who have no respect for women and are continuously focused on degrading and demolishing the majority of impotent women out there by imprisoning them from their rights to live, educate, work and be happy as all other human simply because she is a woman.

Let me highlight a few incidents that happened a few months or years ago. I’m sure none of you could actually not-know any of these below mentioned famous people. I’ll  remind you’ll about some incidents that have gone unnoticed after just a week or two of it appearing on the tabloids and or on the internet but mattered more than just a little global attention from a woman’s point of view:

From the above mentioned three incidents, we can clearly see, or at least I can, these men’s actions, aggressiveness, mental abuse and mental instability. They are unable to see it themselves, I believe as a result of which their women had to go through such tragic situations.

Due to being a man and having all the power in the society, they were unable to see how destructive their actions are.

Firstly, Shoaib lied and ditched his former wife without at least giving her a divorce legally. Did he think about her feelings? Her family (His former in-laws)? NO.

Secondly, Amir cheated on his wife right after 17 days of her giving birth to their second child. Did he think about her feelings? His children and the fact that she was loyal to him throughout their relationship and even after marriage? NO.

Third, Michael, who shot his wife simply for arguing and stating facts about his debts and to repay them on time. Did he think about the very fact that she is arguing with him regarding his debts was because she loved him and wanted him to settle it without getting sued? Did he think for at least a second about his children who will lose their mother forever? NO!

After all human history, men should be glad that we only want EQUALITY and not PAYBACK

The only reason I bought up those 3 incidents about three famous people in this article related to feminism is that at least then I believe most of the same people who think we are hating on men would understand that we, feminists DON’T hate on MEN even though we have all the necessary reasons to do so. Instead, all we are doing is asking for equality and respectful treatment of all the women irrespective of their nationality, status, race, religion, and color. We do not hate men. Neither are we asking the society for the rights such as raping, murdering, abusing or even body-shaming men in return for what most, not all again, MOST men do keep an eye for an eye concept in mind. We are simply asking for corrections in your behaviors towards us and your ugly mindset about how just because you’re a man, you think you’ve got all the power to do a mistake considering it right. Stop mistaking feminism for misandry. They are two sorts of completely different theories.

Feminism is dealing with the science of how things like earth, WOMEN, and water only get one day of respect in settler societies and how we, feminists respond with “No, thank you.” Not one day, a lifetime of equality and proper treatment is what’s needed!

Not A Joyous Father’s Day For All

Nuskiya is a Ceylonese buoyant busybee who is currently majoring in Economics and management at an Institute affiliated to the University of London. She is looking forward to pursuing an advanced diploma in the field of Journalism as well since writing has always been her passion alongside reading novels since her early teens. Besides writing, reading & working on her assignments, procrastinating on the internet and scrolling through her social media accounts is what she enjoys doing.