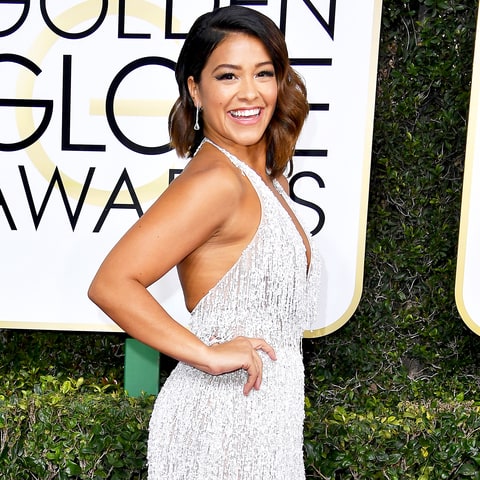 “I am not defined by the fact that my parents speak Spanish or that my skin color is brown. I’m defined by my character, and my character is a strong woman that’s independent, that’s following her dreams, that wants love, that wants a family, that wants to succeed just like anybody else in this world.” -Gina Rodriguez

From creating #MovementMondays to being an award-winning actress and a flourishing philanthropist, Gina Rodriguez is an empowering Latina woman changing the world one notion, one post, one joke at a time.

Born to Puerto Rican parents in Chicago, IL, it wasn’t necessarily easy to make it to the top as a Latina woman. At a young age, Rodriguez knew she wanted to pursue a career in the spotlight. She began dancing salsa at the age of seven, and continued to dance through most of her adolescent life, until she was about 17 years old. At 16, she was one of the 13 teenagers accepted in the Columbia University’s Theatrical Collaboration program, and this is what began Rodriguez’s passion for acting. From there, her life took off; she attended NYU, receiving her Bachelor of Fine Arts from Tisch School of the Arts, and began her acting career in a series of small supporting roles on film, television, and some stage productions. Being a brown Latina woman, the odds were not in her favor; however, she proved everyone wrong, and climbed the social ladder on her own, making her name known, and not with scandals or gossip. Rather, she is highly respected in Hollywood, and acknowledged as a strong Latina actress. If that wasn’t enough, Rodriguez has also found a true passion in using her fame to bring light into the world, and has become an activist.

Recognizing her light and positivity, Gina Rodriguez was awarded the Young Humanitarian award for her extensive contributions to society at Variety’s Unite4:Humanity gala event in 2016. Approaching the stage in tears, Rodriguez gave a speech that brought goosebumps; in few words, Rodriguez wants to create a world where award ceremonies are “excuses to do something good.” Inspired by her upbringing, Rodriguez is driven to bring good to the world, using social status to bring light to issues many individuals find taboo to discuss: homelessness, starvation, bullying, education for the less fortunate, and women’s rights, just to name a few. In fact, Rodriguez has spread positivity on her huge Instagram platform; every Monday, she posts an image of someone she sees as inspiring, with a bit of background on the individual, with the hashtag “#MovementMondays” to her 1.7 million followers.

#MovementMondays Auli’i Cravalho This 16-year-old American actress and singer was born in Kohala, Hawaii. She is of Chinese, Irish, Native Hawaiian, Portuguese, and Puerto Rican descent. Her breakout performance was as Disney’s first ever Polynesian princess, Moana. She was discovered while singing at a charity event in Oahu and was the very last girl to audition for the role. Cravalho is the youngest actress to voice a Disney Princess. Recently, she gave an amazing performance of the film's hit song, "How Far I'll Go," at the 89th Annual Academy Awards. Cravalho has recently been cast as the lead of the upcoming NBC series Drama High. Bravo little lady! Very excited to see all the great things you accomplish. #MovementMondays

#MovementMondays Meet Fereshteh Forough, she was born as an Afghan refugee in Iran during the USSR Invasion of Afghanistan. One year after the Taliban collapsed she moved back to Herat, Afghanistan (where 0% of the population were female students). She then received her bachelor’s degree in computer science from Herat University and later a Master’s degree from Technical University of Berlin in Germany. She taught as a professor in the Computer Science faculty of Herat University for almost three years. Fereshteh was a 2013 TED Talks speaker. In January 2015, Fereshteh founded #CodetoInspire the first coding school for girls in Afghanistan with the mission of educating Afghan women with in-demand programming skills, empower them to add unique value to their communities, and inspire them to strive for financial and social independence. Fereshteh will be receiving the first ever Google @MadewithCode Award on the @youngwomenshonors Tune in December 19th to @theCW to hear her incredible story. #MovementMondays #MadewithCode

Above are two prime examples that something as simple as an Instagram post with an image can reach the masses and empower those who are going above and beyond, but can also acknowledge the wonderful things being put out into the world by these individuals making a difference.

All of Gina Rodriguez’s past philanthropy efforts have led to the moment of her creating her own foundation; she founded the “We Will” foundation, targeted to help those less fortunate wanting to get a higher level education focused on the arts. The foundation will be focused on funding education and scholarships for those who need financial assistance. Though the foundation is still relatively new, it has made incredible leaps forward, donating $10,000 to a dance school, as well as a health clinic as a start. Rodriguez has also become a board member of the Hispanic Scholarship Fund, teamed up with CustomInk for an anti-bullying campaign, and worked alongside Naja, a lingerie line dedicated to helping women and the environment, where the proceeds go towards helping the employees of the company. Being selfless does not always mean donating millions of dollars to a certain foundation, or writing out a check; sometimes it is as simple as agreeing to work alongside a team to keep the magic of the charity alive.

It is safe to say that Gina Rodriguez is a prodigious role-model for anyone willing to fight for what they believe in, and make a difference. A 32-year-old woman who is proud of her roots, fighting for what she believes in, and chasing her dreams each and every day is the type of news that should be on the front cover of the magazines that flood our grocery stores; instead of gossiping on who is getting married, or the latest cheating scandal, women empowerment should be celebrated. Gina Rodriguez has not only provided incredible work on the screen, but also off the screen; her philanthropy efforts, her fight for women, and fearlessness to speak her mind on any and all platforms should be acknowledged, and not considered to be out-of-the-norm. Spreading love and positivity shouldn’t be frowned upon; it should be publicized for the eyes of the coming generation as an incentive to keep the light shining.

Sex Workers & How Your Stigmatization Results In Sexual Violence

How Habitat For Humanity Is Supporting Women Nationwide