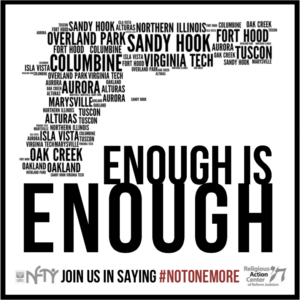 We always hear about mass shootings, but I never thought one would happen so close to home.

On Sunday, November 5th, a man walked into the church at Sutherland Springs and murdered 26 people. 26 innocent lives lost for no reason. It is horrifying. It is sickening. It is heartbreaking. And for me, even more so as this shooting took place in a small town less than an hour from where I live.

And yet, the response from Republican lawmakers has been to pray, tweet, rinse, repeat. We have the highest number of mass shootings for a developed nation and yet people seem to think thoughts and prayers are sufficient. Mind you, if they were, then perhaps churches wouldn’t get attacked. People say one shouldn’t politicize a tragedy, but isn’t that the point of policy? So that the mistakes of the past don’t turn into the habit of the present.

Something that the media only seems to be catching onto is the connection between domestic abusers and gun violence. The last several mass shootings that happened in the United States were all conducted by men with AR-15s who have a history of domestic violence, particularly against their female spouses. Gun violence is a women’s issue – even if most people do not traditionally see it as one. Most mass shooters have a history of domestic violence and their first victims are often their wives and children. These men have a history of abuse against their intimate partners, who are often women. These men have a streak of rage and aggression. They have shown no regard to human life and no reverence for their own families. Yet, they were still allowed to purchase assault rifles without any problems. These types of weapons don’t have any place in an average person’s daily life. But here we are discussing gun control for the millionth time.

Women who are victims of domestic violence are 5 times more likely to die if there is a gun in their home. More than one third of women report being threatened by their intimate partner with a gun and more than two thirds of women who lived in households with guns reported that a gun had been used against them in some way. The math speaks for itself; guns turn domestic violence into domestic homicide and domestic abusers into mass shooters. Keeping firearms out of the hands of abusers means a safer world for women.

In 29 states, convicted stalkers aren’t required to relinquish their firearms and in 41 states, those already convicted of domestic abuse aren’t required to hand over their firearms upon arrest. 760 people are killed by firearms by an intimate partner each year. 93 people die from gun violence every day. Every 16 hours, a woman is shot by a current or former intimate partner. American women are five times more likely to die due to firearms than any other developed nation in the world. I wasn’t even done writing about the Sutherland Springs shooting, when I heard about the Rancho Tehama shooting. Gun violence has become a staple in our news cycle.

But if action isn’t taken now, then when?  How many more innocent people have to die before we decide enough is enough?

If you feel enough is enough, call your state representatives or state senators and demand that they introduce bills to keep firearms out of the hands of domestic abusers. States that have restricted access to guns to those who are charged with domestic violence have seen a 46% reduction in mass shootings. States that have increased background checks have seen a reduction in gun violence. Gun control works and that is why 94% of Americans, including more than 75% of National Rifle Association members support it. Responsible gun owners support background checks because they know that it wouldn’t violate their Second Amendment rights. Gun violence isn’t completely avoidable but steps to greatly reduce it can be taken. It’s time we demand better; for our women, our children, our families, and our country.

Here’s Why You Should Check Out Maple Holistics

Why Is It So Hard To Believe Women?