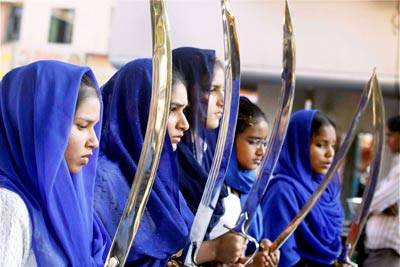 Since 1999, over 1500 children have been sexually exploited in Britain and a portion of the exploited are Sikh girls. For over 20 years the Sikh female youth has been the silent victim of sexual grooming, and over the past 10 years, the issue is rapidly increasing. Through many cities, there are several high profile cases of vulnerable white women being groomed by Asian males. This same group of Asian males took on targeting young women in the Sikh community. The tactics they used to lure in the young girls is distressing and broke the trust of many women that cannot be recovered from. In an Inside Out BBC interview some of these women chose to speak up about the trauma this has caused in their lives and how they have been isolated from their own families and community. The documentary also touched on the lack of help from the police in Britain regarding the issue.

An example of this is Jaswinder*, who at the age of 13 was enticed into a relationship with a groomer and unfortunately, was abused for over 18 months. She explains how he would buy her material items such as jewelry, clothes, and a phone to keep in touch with him.

To Jaswinder, the special treatment made her feel like the center of attention. At such a naive age, she was bound to believe this was true love; this was the exact goal of the groomer. He wanted her to trust him, this way he could soon take advantage of her. She stated that the man who groomed her had disguised himself as a Sikh man. He wore a Khanda and Kara which are Sikh religious symbols. By doing this he gained her trust in thinking he was from the same religion, when in fact he was not. After weeks of gaining her trust, the groomer puts Jaswinder in a position she never thought she would be in. Jaswinder painfully described her groomer taking her to a hotel and giving her a drink, which she would later find out was spiked. She woke up the next morning naked and was confronted by her groomer, claiming he had taken pictures of her naked. He cornered her into having sex with his friend. If she failed to comply, he would exposer her naked photos to her family. To her at the time, she did not see another option and agreed to do as he said.

Unfortunately, for many of the girls who went through sexual grooming, they did not have an outlet to express their pain. The taboo topic would not be taken as serious as hoped and the nature of the families would not let the girls feel safe. The honor of the family would be more important than the safety of the girl. For many centuries the idea that virginity must be kept until marriage is held very strongly in the Sikh community; for that reason, the grooming of girls is hard for families to accept. Families would not want their name to be tainted with shame since their daughters were used. To help bring change to this, Mohan Singh has taken matters in his hands to help some of these girls. As a well respected Sikh leader, he uses his position to educate the families going to Gurudwara to help bring awareness into the reality of sexual grooming of young girls in the community. He has been tracing down the groomers himself by running private investigations, and successfully took many of the groomers to court.

One of the common tactics the families used to help their daughters, was to remove and relocate her from the area. BBC interviewed a 16-year-old who was sent to America to keep her safe from the groomers in the UK. She was relocated to a surrogate Sikh family in a rural town in California. Preet* tells the interviewer how she went from a relationship where she thought she was in love with him, to being forced into sexual acts. The groomer showered Preet with gifts which slowly isolated her from her family and friends. Preet stated that they had sexual relations, but when she realized that isn’t what she wanted, she started to back away. When her groomer noticed she was not giving him what he wanted, he showed her pictures of them sexually active and threatened to show those pictures to her family if she didn’t do what he said. Over the coming months, she was prostituted to men and was told that each time she had sex with another man, one of her nude pictures would be deleted; this kept her in a vicious cycle of constantly being used and her not being able to escape. Preet was in agony when she described how she would wake up drugged and she did not know the men next to her. Her point of view is surprising when she states she feels safe being sent to America. Preet feels that her coming to America would keep her and her family safe from the embarrassment of anyone finding out what happened to her; she feels as if this is her second chance at life. A family counselor says that relocating a sexually groomed victim can cause more harm than good. Emma Kenny (also interviewed by BBC) says that removing the victim would display the message that they are the problem, when in fact none of this was the victim’s fault to being with.

To gain perspective, Inside Out BBC interviewed a man who was once part of a grooming gang; he left and is now in hiding but agreed to talk about his experiences. He says certain Muslim men will disguise themselves as Sikhs to gain the trust of the Sikh girls. Grooming groups see the vulnerability of a Sikh girl and take that to their advantage. Sheikh Ibrahim of the Muslim Council of Britain presses on the issue that there is little evidence to prove these grooming gangs are in-fact of the Islamic faith. He wants to emphasize that sexually exploiting a child is a despicable act and is not tolerated in the faith of Islam.

Sue Berelowitz from the Deputy Children’s Commissioner has worked with the Sikh community and their concerns, and she was very clear when she stated that the sexual exploitation was not done by one specific ethnic or faith group.

If you notice or have been informed that someone you know is being sexually groomed, it is absolutely vital that you inform law enforcement. Whether you’re from the Sikh community, Muslim community or any other, it’s essential that you report the matter so the proper actions can pan out. Speaking out about this would also help the victims come out and get help for the trauma they face.

The Type of Sexual Assault We Don’t Talk About: Coercion 18343