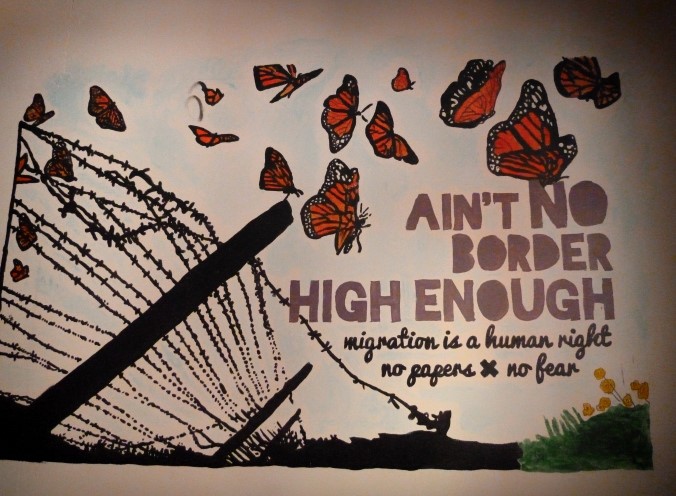 If you are subject to deportation or if ICE (Immigration Customs Enforcement) shows up at your door, below are some of your rights. These are just some of the rights of immigrants. The ACLU provides a list of rights for different scenarios.

Deportations create fear among communities and families. ICE has increased its policing in brown and black communities. This is on purpose because the majority of immigrants detained and deported are black and brown. This causes them to be afraid to go outside, too afraid to go to school, to go to work, etc. Asylum seekers are deported even if they have credible stories. Even though they come through the legal port of entry seeking asylum, a lot of them are still deported. Our veterans are also deported. They are only returned to the US if they die and are given a military funeral. DACA recipients risk being deported if the federal government refuses to extend DACA (Deferred Action for Childhood Arrivals).

In 2011, it was reported that about 5.5 million children have a parent who is undocumented. Children struggle mentally when their parents are deported. They struggle with trauma, anxiety, depression, panic attacks, etc. Aside from this, they face economic responsibilities as well as household responsibilities. Some even get jobs to help their parents with money. All of this affects them in school because they do not have the support to handle these difficult changes. Moreover, many children end up in foster care due to their parents being deported. In 22 states, there were about 5,100 children in foster care in 2011. With the increase in deportations, the number could be higher. For a lot of children, staying with extended family members is not an option since they cannot care for them.

The law vs. immigrants

Clearly, the government does not only deport violent criminals. Even if you have no criminal record, you can still be deported. Crossing the border into the US is a misdemeanor that puts immigrants at risk for deportation. Minor crimes do not exclude any immigrant from being deported. In order for someone to be deported, their country of origin has to accept the return of the individual. ICE is deporting immigrants to countries where they face death, violence, and poverty. There have been several cases where immigrants are murdered once they are deported back to their country of origin.

The federal government threatens to fire judges so they reject the majority of asylum cases. Basically, the federal government is trying to limit the number of immigrants who are granted asylum. It is important to note, many immigrants do not have legal representation and many cannot afford one. Immigrants are not appointed a lawyer making it difficult for their cases to be heard. Immigrant children also have to present themselves in court even though they are too young.

Deportations cost taxpayer’s money and do not solve anything. Therefore, deportations are not going to stop people from migrating to any country. There are several reasons why immigrants leave their country of origin. The fact is, there is no future for them in their country of origin. The federal government makes it incredibly difficult for immigrants to obtain documentation. Becoming a resident is too expensive.

Depending on the case, the costs can be around $1,140 or more. This is a lot of money, considering many immigrants come from low-income backgrounds. With the fees increasing, it is going to be even more difficult for immigrants to obtain documentation. The fewer people adjust their status, the more deportations there will be. Deportations are only causing more destruction to our communities. The federal government needs end deportations and make it easier for immigrants to become residents and citizens.

What You Should Know About Body-Focused Repetitive Behaviors

The Act Of Virtue Signaling