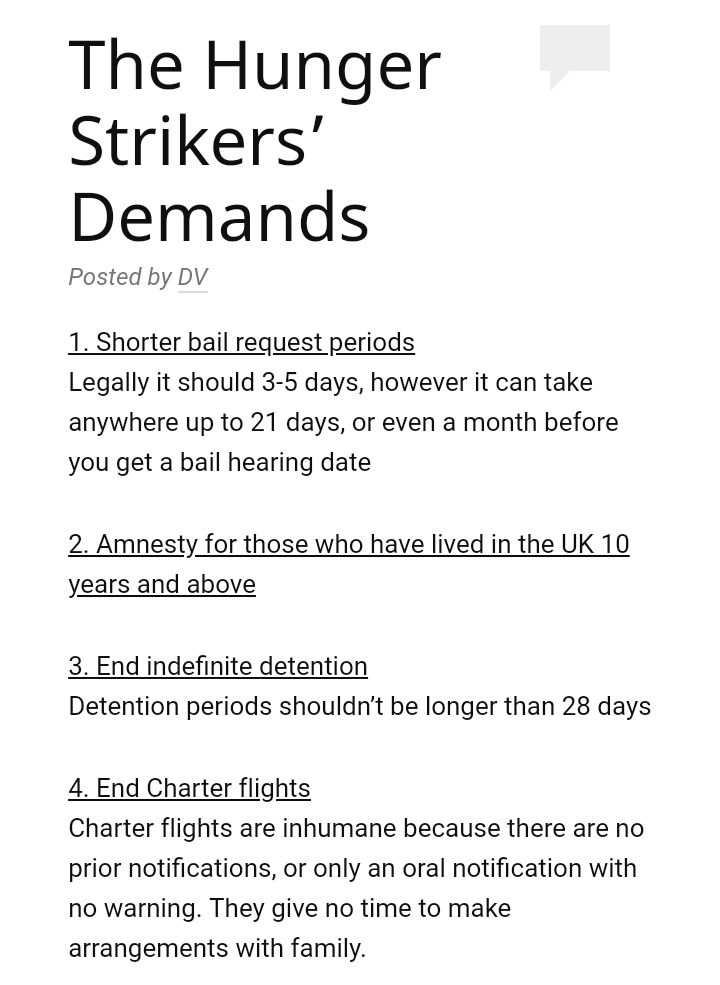 The UK is a country that prides itself on justice, freedom and equal opportunities for all, so why are more than 100 people in Yarl’s Wood detention centre hunger striking?  You might think it’s to protest their individual cases but no, it is a protest against the whole system under which they are held.

Yarl’s Wood is a detention centre for asylum seekers who have not yet been granted leave to remain, many of whom are facing deportation.  Its population is overwhelmingly female but also supports family units.  Despite being a unit for people who are dealing with the Home Office it is not a government run facility, it has always had its management outsourced and is currently run by Serco.  Despite our governments apparent unwavering belief in privatisation (see also our railways, healthcare services and benefits assessments) this has not worked out well for the people held there, in fact this is the fifth hunger strike since 2001.  These strikes have been about healthcare provision, indefinite detention, the deaths of detainees and staff behaviour (reports of sexual abuse have been corroborated and witnesses conveniently deported).  It’s fair to say that Yarl’s Wood has long been considered a controversial unit and the most recent strike suggests little has changed.

The latest hunger strike has a series of demands which I have summarised below from a post by one of the detainee’s own blogs.

3 – An end to detaining people indefinitely

4 – And end to deportation by charter flights

6 – And end to ‘torture’ from the staff and the system

7 – An end to separating families

11 – Emergency alarms installed in every room

14 – Release of people with outstanding applications

This list includes some basic rights; food, healthcare, safety and access to your member of parliament are all protected by UK law and yet these people are being denied these rights.  Whatever anyone’s opinion on immigration (and the Brexit referendum demonstrated many in the UK hold less than positive opinions) it must be recognised that to live without such rights being protected is tantamount to abuse at the hands of our government.  Regardless of anyone’s status, they should be able to live safely while in our country.

The bigger issues are harder to understand but equally important.  Charter flights are a system where people are deported with no notice, no chance to notify family and no right to access legal advice.  Can you imagine the terror a detainee must feel every time a member of staff approaches them, not knowing if they’re going to announce they’re to pack and leave the country immediately?  Indefinite detention means people are held with no idea when or if they will be released.  The recommended maximum time for this type of detention is 28 days, however, many people have been held for years or released and then re-detained despite following all the laws and restrictions placed on them.  Many of the people in Yarl’s Wood are people who were brought here as children by parents and families fleeing to the UK illegally.  Like America’s Dreamers, they had no choice in where they were taken and yet are being punished for their parents ‘crimes.’

The reports coming out of Yarl’s Wood and the conditions the detainees are facing are heart-breaking but not surprising.  Reports in the Guardian on mistakes and ineptitudes by the Home Office have been coming thick and fast recently.  Stuart Ross was pursued for years and taken to court multiple times because the home office failed to recognise tax records as proof his EU national wife was working.  Haruko Tomioka, also living here legally, had her child benefit and driving license canceled and faced arrest and deportation due to Home Office errors.  Leah Waterman was almost deported illegally, which would have left her severely disabled British husband, who suffers life-threatening post-stroke seizures and is too ill to look after himself, as the sole carer for her two British children.

A damming article showcasing some of the Home Offices more ridiculous decisions included a man claiming on grounds of religious persecution being refused because he answered that God was Jesus’ father rather than Joseph, a woman being interviewed when she was in the middle of a psychotic episode, an application being rejected because the lawyer used ‘don’t’ rather than ‘do not’ and one man being told in writing that there was a ‘flourishing gay scene in Malaysia’ and provided references to a website that stated ‘LGBT rights do not yet exist in Malaysia’.  If this is how people who are not currently detained are being treated, it is hardly a surprise that those in detention, cut off from society and support, are facing severe problems.

The hunger striking detainees are facing the backlash from officials and staff at Yarl’s Wood.  Attempts to separate and intimidate them have been reported.  One blog post details a striker being asked ‘why don’t you go back to your country?’, a phrase often hurled at people of colour in the streets, sometimes accompanied by violence.  The detainees have submitted extensive claims and evidence as to why they can’t ‘go back’ and to hear this ‘racist abuse’ from government officials and Serco staff must be utterly demoralising.  Instead of asking which systemic failures have lead to this situation, the powers that be are digging in their heels and providing more and more reasons for the detainees to protest.

One common theme among the rhetoric surrounding immigration in the UK is that people come here for an easy life.  From my work teaching English to immigrants I can say this is not true; I have met people who have been dumped in Leeds having previously been living in London, people kicked out their house and moved somewhere miles away on short notice and with no help, people who have to walk nearly two miles to take their children to school because the tiny amount of money they are given doesn’t cover the bus fare, people being sent letters by the Home Office that I, a native English speaker, could not fully understand.  And detaining them is certainly not the cheap option; despite seeming to cut costs at every corner, detaining a single person in a centre similar to Yarl’s Wood costs roughly £30k a year.

Take some time to read the stories on the Detained Voices blog, stories from people legally married to British citizens, people separated from their families, people with health conditions being told they don’t have the right to access doctors, people who have children in the UK, and then join the fight.  This is the UK and we are always being told this country is fair and just, maybe it’s time we started proving it.

Fat, Brown And In Love