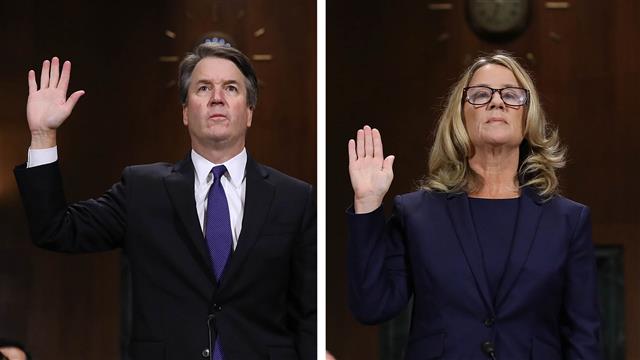 Donald Drumpf’s Supreme Court nominee, Brett Kavanaugh, is currently facing trial for a sexual harassment allegation by Professor Christine Blasey Ford. During the hearings on Friday, Ford recalled the atrocious events that unraveled 36 years ago when both of them attended Georgetown Prep high school.

Ford shared the mixture of fear and pain that she had encapsulated inside her since the day the atrocious action was committed against her. She “thought he might inadvertently kill” her as he “was trying to attack” her “and remove” her “clothing.” During her hearing, she said she was “terrified” but believed it is her “civic duty” to come forth.

Prior to the hearing, Ford had to go through a lie detector test which ensured that her story was true. There were additional accounts of her therapy sessions that mentioned a “rape attempt” by a group of boys from an elite high school.

Beyond this, Ford opening her story for the public led another woman to come forth with the terrible memory of being harassed by Kavanaugh. Ramirez and Kavanaugh were both students at Yale when she was attacked by him. She noted that she was drunk, but even at the moment, she was well aware that she didn’t want to be in the situation. Through the account of another student at Yale, Kavanaugh was “relatively shy” but “aggressive” when drunk.

Another narrative by Julie Swetrick dwelled into how Kavanaugh and Mark Judge would “spike” drinks with drugs and then would have guys line up in front of rooms to gang rape the girls that they drugged.

The terrifying account gives depth into the man Kavanaugh was through his high school and college years. However, Kavanaugh continues to deny any allegations on the ground that he doesn’t remember committing them.

Christine Blasey Ford’s kind and soft voice sharply contrasted Brett Kavanaugh’s loud aggression. The hearing would ultimately determine if there was an FBI investigation to be launched regarding the allegation, or if Kavanaugh would get away with it in full confidence.

The FBI investigations were proposed by the Judiciary Committee as it would provide insight on the “current credible allegations” which Republicans affirmed would be in the FBI’s hands to decide upon evidence.

A SHIFT IN FLAKE’S STANCE

The republicans arrived with confidence having 49 solid yes vote, just one away from getting the 50 to confirm Kavanaugh’s position. As a result, every vote on the opposing end made a huge altering decision.

Flake, initially bounded to voting against the investigation shifted sides after a confrontation by two protestors that blocked the elevator to be heard out. They vocalized that by confirming Kavanaugh “you’re telling that my assault doesn’t matter,” These moving words led Flake into a private anteroom with Sen. Chris Coons, D-Delaware where for an hour they discussed the situation in depth.

Flake’s shift has now opened up an FBI investigation, what is to proceed will unravel in the next few days.

Zaina Awan
A 17-year-old high school student that spends most of her time drinking tea and reading political philosophy.