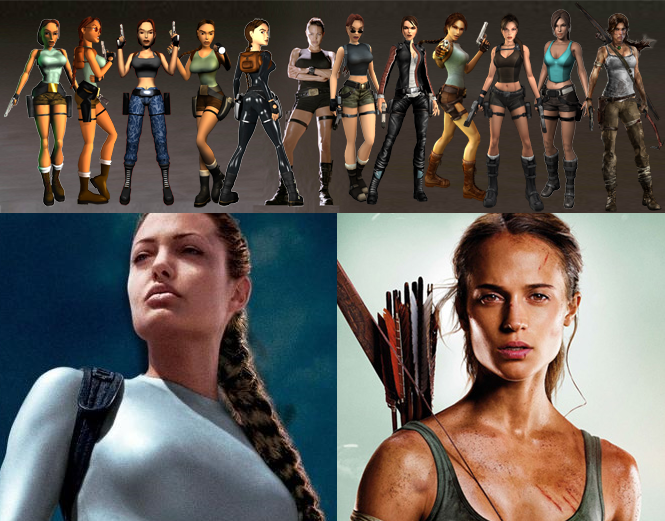 Who is Lara Croft? She is a fictional video game character envisioned by Square Enix Europe, previously known as Eidos Interactive. They are a British video game company. The premise of the video game consists of Lara Croft, an established and decorated British archaeologist, going on an adventure to stop an organization, who wishes to acquire the rare finds and use it for world domination and or destruction. This goes beyond her morals thus, she sets forth in her mission to bring about justice and save the world. She must scavenge through ancient tombs to find the artifacts and hazardous ruins around the world as well as fight off those trying to snatch them, thus the name “Lara Croft: Tomb Raider” was introduced.

If you were born in the nineties, you know how revolutionary it was having a female-centric video game. She provided a new platform for young girls to see themselves as a strong woman being the protagonist rather than the extras in the background. However, with each step forward there is more progress to be made. The video game drew a lot of criticism given the appearance of Lara Croft herself, but this did not stop the ever-growing popularity of the franchise. As we have seen it being re-envisioned in mainstream media with films, tv shows and new versions of the game. Given recent news circulating in the media about the choice of actress chosen for the titular role of the infamous Lara Croft, it would be beneficial to analyze how we have reached this far.

Although, the Tomb Raider franchise did receive its’ fair share of criticism. The first and foremost problem with the game was the fact that she was a woman with amplified features that are highly sexualized. It stripped away personality from the character and left her to be nothing but a sexed body. I never really understood why the lack of or too much clothing is proof of the level of “sexiness” of a person. I think that we have lost the meaning of the word because of the mainstream media. We have boiled down the word to physical appearance when it should be how we view ourselves rather than how others view them. The meaning of the word has been changed and it is our responsibility to change its perception. Once we are confident in our decision-making capabilities our appearance to others changes along the way. Sexiness is empowerment, self-confidence, and intelligence. It is more than just how you look.

The evolution of Lara Croft has been re-envisioning several times, which is very much expected. For the audience, the whole purpose of playing a video game and or watching a movie is to escape from their lives. We do this to rid ourselves of our responsibilities for the time we are engaged with the product we are consuming, whether it is a movie, book, video game etc. This requires for the makers of these works to create a universe around the characters to make this experience for the audience a memorable one. The more complex and detailed the character becomes the more we amerce ourselves within the story thus determining the success. With the recent introduction Tomb Raider in the series, showing the evolution of the already established character adds more depth to the cult classic. The series gives the audience the chance to witness the beginning of a fictional being who can become more than just your average character, but a role model for young girls.

In 2001, Lara Croft series, Angelina Jolie was accepted with open arms because she was the ideal human embodiment of the character given the appearance, she had the perfect mixture of femininity, fierceness, and athleticism. Whereas, in the remake of the Tomb Raider series, we have seen the casting of Alicia Vikander as a young Lara Croft. If you have any knowledge of the new video game series, you will notice that they have done an impeccable job at finding an actress that fits the role given the appearance of the current game series. Some of the criticisms of the current Lara Croft was the fact that she seems too young to be Lara Croft. However, as noted by the makers of the film, it is the start of the legend of the Tomb Raider. Another criticism was that Lara Croft was not sexualized enough. In other words, she does not have the features desired by the superficial heterosexual male. The bigger problem is why it is a problem in the first place. Lara Croft is not meant to be a sex symbol! I do not think she was ever meant to be one. I think she was created for the generation of female gamers who wished to witness a female protagonist on their screens.  Anytime there is a woman in control and or in lead she must be “showing off” her features to garner profit. But, I think we have passed a point in time to say that a woman is “too weak”, “not sexy enough” and or simply “doesn’t deserve” to play a role to make a big splash at the box office.

As for my thoughts on the franchise, I cannot wait to witness this monumental film event. I think it is important to acknowledge that not all heroes need superpowers and it is about time we see a female lead who survive on wit and athleticism. It also adds a special message to the young girls to re-assure them that becoming a powerful woman takes time and that is not a bad thing. Is it wishful thinking to wonder if we can raise our young girls into believing that you can be your own hero. That we are not born a hero but are shaped into one, and therefore they should remain strong against all adversity.