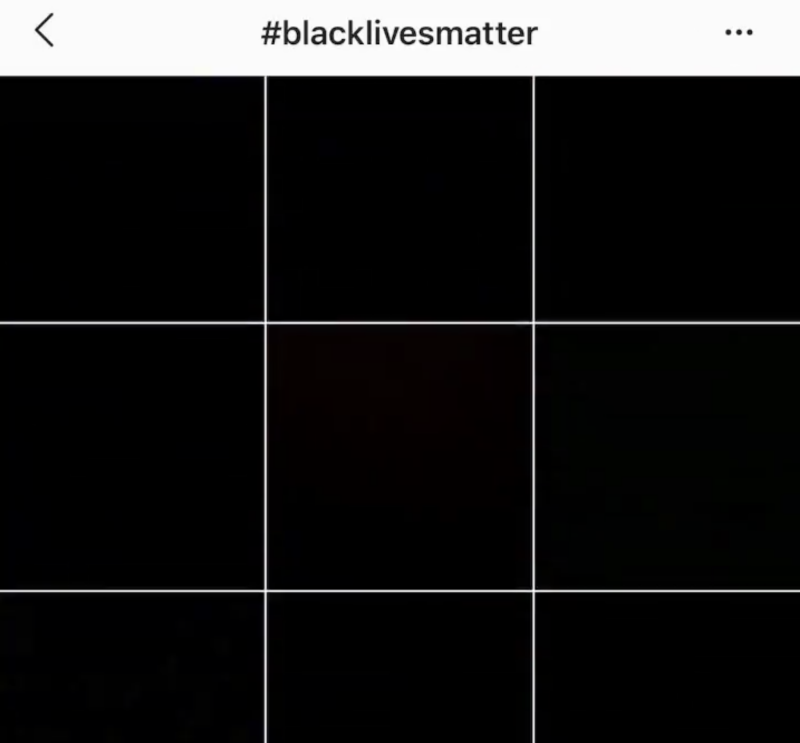 And Why I Am Left With More Questions Than Answers

My first draft of this article was titled “How 2020 Changed Instagram,” chronicling how the global pandemic and protests have impacted the use and image of social media. I described how Instagram reinforced the false narrative of the pandemic as the “great equalizer,” led to the “swift dismantling of the cult of celebrity” and the illusion of collective suffering. However, through the process of writing and editing, I began to realize my mistake- by conflating the BLM protests and the pandemic’s effect on Instagram, I was essentially reducing the highly necessary and effective organization efforts of Black organizers to a new “moment” in Instagram’s trajectory. I decided to shift my framing entirely, setting aside my analysis of COVID-19’s impact on the app, and began a critical investigation into the ways in which Instagram has been utilized recently as a site of racial activism.

On May 25th, George Floyd, at 46 years old, was murdered by members of the Minneapolis police department. Although previous acts of police brutality and other forms of racism have led to users voicing outrage through social media outlets, the complete transformation of purpose, scope, and usage of the app is without parallel. Within a few days, the Instagram story feature became flooded with a mixture of links to petitions, donation sites, and demands for justice. What was once known as a site of superficial reality transformed into a site of uncomfortable truths. In fact, the purpose and role of the platform seemed to have shifted course entirely.

Previously serving as a source of collective escapism in a fantasy world of self commodification, Instagram now serves as a network of resources by the effective circulation of information. For a white individual like myself, Instagram consumption turned into a form of education, a (sometimes overwhelming) process of unlearning and relearning. Almost unrecognizable, my feed serves as a space to find anti-racist book lists, information about the week’s protests to attend, and how to best communicate and reflect with your white family members about your inherent participation in white supremacy. Instagram’s once implicit endorsement of perfection rapidly shifted into vigorous examples of imperfection.

Nonetheless, the seemingly transformed version of  Instagram or the wave of posts hashtagged with “BLM” does not equate to the radical transformation of society. Actively striving to dismantle historical systems of white supremacy requires multifaceted and continuously intentional efforts on behalf of the white population, often described by black activists, theorists, and organizers as “the work.” It is a messy process that requires humility and the erasure of fear of failing, because as Instagram has proven: you will.

Corporations, influencers, and “normal” individuals alike participated in a mass wave of posting black squares a few weeks ago, serving as an excellent example of how despite Instagram’s possible shift in purpose, social media’s ability to enact a sweeping domino-like effect has not been diminished. Completely antithetical to the point of the platform’s important role as a resource network, almost overnight, the once information-rich app became literally blank—stripped of its power and purpose. Similarly problematic, some accounts responded to the controversy by not changing the content they posted but simply altering the caption. For example, picture a young white girl posing in a bikini in front of a beach, contorting her face to look the poutiest and angry, flipping off the camera with the accompanying caption that reads something like,  “My face when someone says ‘All Lives Matter.’”

These examples are more than simply cringe, or out of touch, they also serve as a reminder that despite the current shift we may see in our social media, Instagram is still deeply rooted as a site of hypercritical performance, which ultimately limits its effectiveness as truly being an authentic site of activism.

Ultimately, when reflecting on the past months of 2020 and the ongoing transformation of this social media platform, I am left with a set of questions rather than answers.

Will the continuing use of Instagram to serve as a site of activism on behalf of oppressed groups hinder its efforts more than support it as it falls prey to the trap of being simply “trendy?”

How does Instagram’s visual nature impact its engagement with these subjects versus other forms of social media? How does it impact what we view as truth or illusions of reality?

Critiques of “Instagram activism” include its minimization of real work to a level of performative activism and virtue signaling for white people to reduce their guilt and be able to excuse themselves from any authentic interrogation into their own complicity and ways that they uphold white supremacy. Despite the various motives behind their involvement, is all circulation of valid resources helpful to the movement or ultimately counter-intuitive?

How have the events of 2020 undermined Instagram’s perpetuation of a false, perfect, reality?

Is the seemingly “transformed” nature of the app in its use and purpose legitimate, or merely acting as a smokescreen if the motivations behind the content still emerge from a place of performance and elevation of self-image?

Despite Instagram’s deeply rooted environment of self-elevation and performance, if the app’s new usage as a resource-rich educational tool is causing white people to think critically and interrogate their own complicity – do the pros outweigh the potential cons?

In the end, the question isn’t “when” will it go back to normal, but what is normal? Perhaps Instagram’s cloak of mass delusion is lifting as the white-dominated world of the internet starts to wake up.

Read also:
The Dos And Don’ts Of Being An Ally
Stop Using MLK To Defend Your Hate
My Queerness Does Not Absolve Me Of White Privilege

Why The Friend Zone Is Just A Toxic Mindset

Trans Discrimination In Healthcare Can Kill