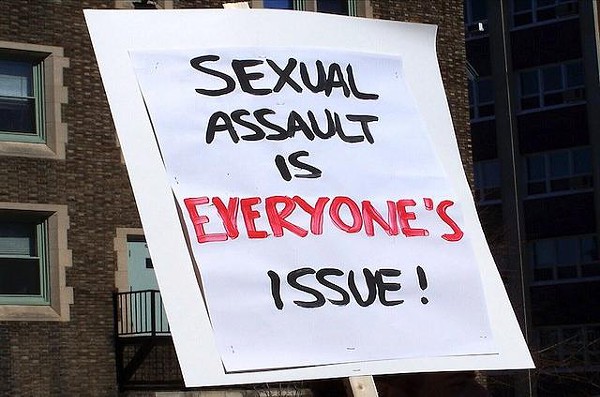 “No” is a word often sheathed by women in a close-fitting covering. It is a word intrinsically engraved onto our skin; a word we may know better than our own native tongue. But there are also those times when the word simultaneously lodges itself into our throats, nestles in the crevices of our stomach, or sticks itself into our core.

In the ears of some men, the word is short-lived. They believe it to be some fleeting syllable that bears anything short of significance. Most often try to siphon out some sort of affirmation in the word:

Any such phrases are utilized to pry something out of the woman’s mouth―something that could be used to invalidate her decision or otherwise undermine her reasoning.

The first time I said no, I believed myself to have been firm and strong. But he was firmer and stronger. Not in his words, but in his physicality. It was then that I was coldheartedly faced with how manipulative others can be in attempting to trespass the boundaries you have set.

I never realized how truly difficult it can be to say no; it provides an insightful and centralized focus on how girls are socialized to cultivate decisions that pander to a man’s wants, but that don’t particularly sit well with the girl’s internal emotions.

As Kathryn J Lively precisely states in her article Why Women Have a Hard Time Saying No, societal facets have been molded so intricately that both girls and women “learn to subject their own needs to the point that they are taken advantage [of] or they end up doing things they don’t want to do.” It’s disconcerting how something can be so heavily curated and chiseled into girls’ minds that they immediately deter conflict by agreeing to something that oversteps their boundaries.

So often are girls and women met with the term “prude” when they say no that this also results in giving in to the pressure that the boy or man is attempting to instill in them. The word is something utilized to dehumanize the girl’s discernment in what she wants to do with her body and with whom she wants to do things with. In her article, Kelsea Stahler describes “prude” as creating “another demoralizing pejorative that is meant to make a woman change behavior society (or men in that society) have deemed unwanted.” It’s a sly and cunning way to sever the girl’s bind to her autonomy and have her question the validity of her own words.

The aftermath of assault is something so incredibly innate in the way one views their own body and words. There is a sort of detachment from the word “no”―a fear wedged inside that somehow a two-letter term would be contorted or warped so as to take advantage of you. There is a fear that the boy whose lip curled into a slight smile will turn immediately impassive and slander your name.

When recounting the impact of sexual assault and how the word “no” has ultimately become skewed, an anonymous speaker spoke of how the blame still stuck onto their skin.

“It’s been half a year since it happened and to this day I’m always asking myself what I did wrong. . . I wonder about the different things that I could have done to avoid it,” they said. “Sometimes I also get in my head and say that it’s karma; maybe that was the universe paying me back for how I made other people feel. I’m still too scared to let anyone get close. I just don’t want to relive him. I don’t want to relive it.”

Another anonymous speaker regarded their experiences with abuse, recounting on how they felt in reference to altercations.

“I kind of grew up believing that you had to endure situations even if you didn’t want to be in them. In return, that made saying no very hard. I’ve realized no is a complete sentence and just not wanting to do things is valid.”

It took months after the assault for me to realize that “no” is as concrete and potent in its validity as I wish it to be. It is as significant as my autonomy, my identity, my flesh. It is time to the claim the word as my own. Just like I have claimed my body.

It’s been said before and it will be said once more: We need to address sexual assault and abuse. We need to address it firmly, directly, and with raw incentive. It’s time to dismantle the trepidation that comes with being a victim of sexual assault. This societal framework needs to curate a safe sphere for victims to openly talk about their struggles without being demeaned. It is tiring to have to stifle your experiences and bury them among close-lipped metaphors so as to not bluntly bring attention to the subject. It is even more tiring to see people continuously dismiss victims’ stories without corroboration.

Tweet
Previous ArticleNice To Finally Meet YouNext ArticleThe Pendulum Swings Both Ways: How We Feminists Need To Rebrand Our Movement