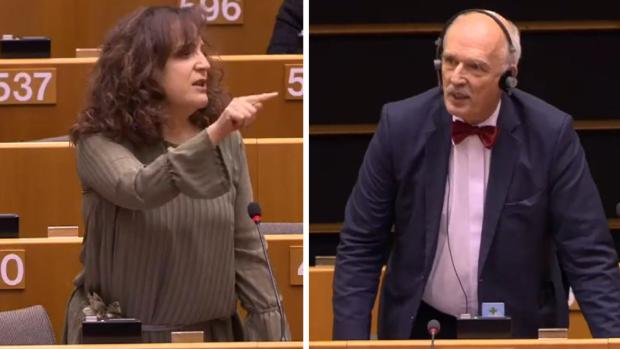 As societal movements inclusive of voices akin to the Women’s March permeate sociopolitical discussion, United States’ Congress and European Parliament are professedly making hasty strides to amend unremitting injustices within misogyny and sexism—notably, beginning with that of the economic debate of the gender pay gap.

Upon March 1st, 2017, European Parliament congregated within Warsaw, the capital of Poland, to deliberate plausible resolutions to the present unequal pay debacle, which is an unabating worldwide unjustness. However, 74-year-old Janusz Korwin-Mikke, an indigenous Polish Member of the European Parliament (MEP), was uncompromising within his ideologies, and heaved into what has been illustrated as a “sexist tirade.”

Throughout the videotape of the nauseating incident, nationalist Korwin-Mikke proclaims, “And of course women must earn less than men because they are weaker, they are smaller, they are less intelligent, and they must earn less.  That’s all.”

To supply evidence to his allegations of inferior intellect, Korwin-Mikke communicated, with reference to The Huffington Post Canada, that, “Women only made it to [800th] place in a Polish physics olympiad and they made up none of the world’s top [one hundred] chess players.”

In a powerful assertion, Garcia Perez contended, “Look, according to your theory, I should not have the right to be here as a member of this parliament.  And I know it hurts you, I know it hurts and worries you that today women can sit in this house and represent European citizens with the same rights as you.  I am here to defend all European women from men like you.”

Garcia Perez herself has exhibited gratitude from parliament bystanders in resounding applause, while Korwin-Mikke snickered and took his seat within the house.

Since the incident, European Parliament President Antonio Tajani has incited an investigation into Korwin-Mikke’s workplace behavior, for, “Under the parliament’s rules, members are obliged to show respect to each other and must refrain from ‘defamatory, racist or xenophobic language or behavior.'”

Unsurprisingly, a substantial likelihood of censure, fine, and suspension from his position as an MEP has been prompted for the Polish misogynist’s impending future.

Nevertheless, ramifications for despicable conduct are not a fresh conception to the prejudiced politician.

In accordance with The Washington Post, “Korwin-Mikke has faced censure from parliamentary authorities three times before. In 2014, he was fined after giving a speech that used the word ‘n***oes,’ and in 2015 he was temporarily suspended after giving a Nazi salute[.]”

Furthermore, within 2016, he was not granted attendance allowances for approximately ten days—which equates to €3,060; £2,633 of monetary value—and was provisionally terminated from employment for five days for contrasting Europe’s influx in immigration to “excrement” and “human garbage.”

Alongside Korwin-Mikke’s recurrent questioning with regards to whether Adolf Hitler forthrightly played a hand within the Holocaust, he, “—has suggested that perhaps women should not be allowed to vote and said that domestic violence brought women ‘down to earth’ (comments he later indicated were meant ironically).”

Ultimately, loathsome individuals comparable to Janusz Korwin-Mikke and himself are a systemic representation of not exclusively misogyny, sexism, and non-intersectionality, but brazen antisemitism, xenophobia, and racism.  Although he is/has been challenged with repercussions, he exists within his parliamentary appointment, where he is facilitated with a significant platform to legislate his ignorance and animosity.  In summary, he is an incessant enabler to aggressors globally.

Collectively, limelight must be shone upon activists equivalent to Iratxe Garcia Perez, who is valiantly grappling for civil reform, as opposed to that of Korwin-Mikke.

From women everywhere, we thank you, Iratxe Garcia Perez, for championing against abhorrence, and positively influencing your community and beyond its borders.