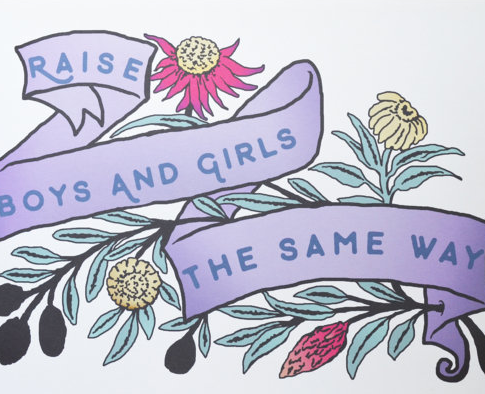 Disclaimer: This is a narrative. I added my personal experience in it, and much of the article has to do with my experiences growing up. I know that not everyone is going to agree. I also know that someone is probably going to be angry after reading it, and that’s okay. Creating content that people can debate over is better than creating something blank that doesn’t start a fire in anyone. Anyways, enjoy!

Everyone that knows me knows that I’m as liberal as you can get. I’m a feminist, pro-choice, an ally for the LGBTQ+ community, and I stand with Standing Rock. I think that gender norms shouldn’t be the norm—and that people should have the right to identify as whatever gender they want, or not with one at all. I identify so far left that I’m left-handed.

Regardless of my views now, I wasn’t always like this. I grew up in a conservative household that valued “morals” and teaching me how to act like a “lady.” Almost every adult in my family doesn’t believe in anything that I do, from abortion rights to marriage rights. It’s always been hard to be the black sheep of the family, but it’s increasingly difficult because I’m a girl. Because I am female, I was taught how to be domestic. Throughout my entire childhood, my mother taught me how to stay home and sit pretty while my brother played outside with his friends. My brother got to stay out late, play when it was dark, and go to friends’ houses—but not me. I was always cleaning, reading, or doing my homework. It was rare that my mother let me go outside or have fun because I am a girl, and “I had something to lose,” as if my brother didn’t.

This type of treatment almost broke me as a child—and I’m sure it does with females everywhere who are seen as fragile just because of their gender. Because of this upbringing, I grew up, formed my own opinions, and have learned to speak out and voice my opinion with no shame.

My family [and society in general] also tried to raise me with the idea that “boys will be boys,” and I truly cannot think of anything else that had such a negative impact on my well-being. Let’s get one thing straight with this, and boys are not created to be problematic. They aren’t born so that they can do whatever they want and not expect anyone to do anything about it. This phrase is so toxic and disgusting because being a male does not give leeway for acting a certain way. It’s time to break the stereotype and raise boys and girls the same way so that society can learn how to function with equality.  Boys need to learn to act like working members of society—no excuses.

This phrase took a toll on me growing up because I always asked myself, “Why can’t I be a boy?” I was never questioning my gender identity, but I was questioning why I couldn’t do some of the things that my brother did. I wanted to be a boy because, in my eyes, being a boy meant having the freedom that I could never have. But now that I look at it, all I ever wanted was to be treated the same way that boys are.

All I want is equality.

I’m not writing this to shame my family for making me feel the way that I do today, and I’m certainly not writing this out of spite. I’m writing this as a message to people everywhere that there are better ways to raise children. Equality is a great thing, but it cannot be achieved if we’re programming children to act a certain way at a young age. We need to encourage girls to stand up for themselves and have a choice while teaching boys that “boys will be boys” is not a reasonable excuse in any aspect.

I’ve become the person that I am today regardless of my upbringing—but not everyone grows up to form their own opinions like I did. Many people stick with the ideals that their family raises them with. It is hard for people to do a 180 on the things that they were programmed to think, so I know that I’m a rare example of someone doing so.

I’m hoping that the millennial generation will be the one to end this type of unhealthy gender-specific norms that society has spent decades creating. It’s time to raise people the same way so that everybody can thrive.

It’s time to teach people to act like good people—nothing more and nothing less.

‘A Day Without A Woman’ And What It Means