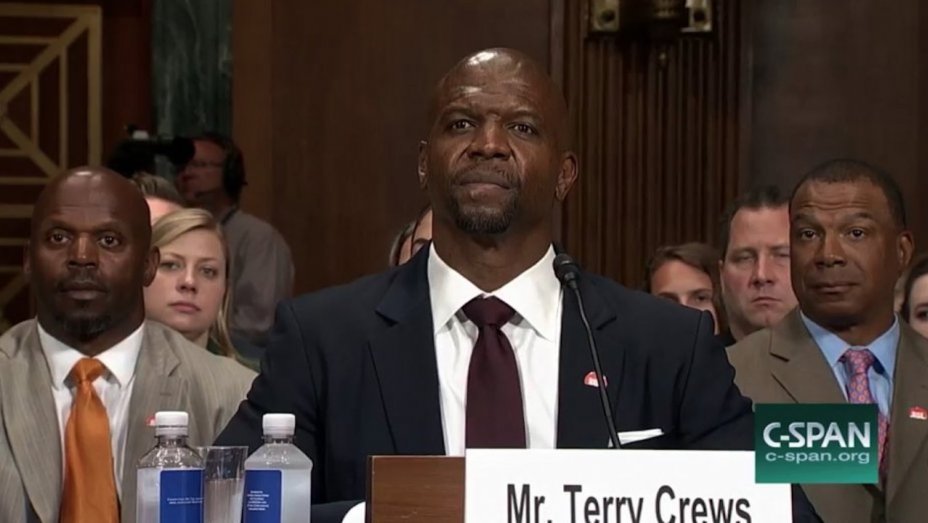 With the “#MeToo” movement making its way throughout Hollywood, countless female celebrities have come forth with sexual abuse allegations against co-workers, producers, any other abusers within their workplace. Producers like Harvey Weinstein have been publicly exposed and rightfully punished for the terrible crimes of sexual assault committed against many. In 2016, another allegation had also come into light. However, this one was different than the rest as it was by a male survivor, Terry Crews. We all know Terry Crews is known for playing football and for his various roles in movies and TV shows through the years, but most importantly, like the rest of us, he is a human being- and one who has unfortunately been a victim of sexual assault.

In an interview a couple of years back, Terry Crews stated that he was at an event with his wife when a Hollywood Agent named Adam Venit approached him and violated him by grabbing his genitals. Regardless of gender, the emotions one goes through after experiencing this kind of violation are intense. Shortly after coming forth about his experience, Terry Crews filed a case against Adam Venit, which was later disregarded and thrown out by law enforcement. This shows us how POC and survivors of abuse are constantly treated unfairly, and also how social status can allow abusers to keep getting away with their actions.

The cruel commentary that is also surrounding Terry Crews predicament is absolutely ghastly as he is continuously questioned about “manhood” and why he “didn’t fight back.” Despite all the backlash and lack of support in certain places, Crews did not remain silent. He recently stood in front of the Senate and delivered his testimony (click HERE for the video VIA USA TODAY) 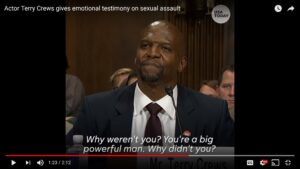 In the video, Crews is questioned in front of the Senate, “You’re a big powerful man, why didn’t you….? *senator makes a shoving indication*

This is a form of victim-blaming that many men face every single day.

“Why didn’t you fight back?”

In response to this, Crews maintains his composure and eloquently explains a pattern we have all seen: that being a black man in America does not always grant fair treatment in these kinds of situations. He goes on to explain that he has seen young black men jailed and killed for trying to fight back in any situation. (This is something we have all seen on the news with the unjust killings of people like Eric Garner, and countless other black men for no reason at all)

In Terry Crews coming forward, he is not only rightfully exposing an abuser, but he is also a voice for many men (especially men of color) who may also have been victims of sexual assault. He is a voice for those that may not even know they have been assaulted or those that may be ashamed to come forward with their experiences because of the society we live in silencing survivors.

As a society, we have to remember that men fall victim to sexual assault too and to dismiss their pain or experiences only push unnecessary gender roles that society has placed within itself. Anyone can be a victim of sexual assault, and we need to believe survivors, stand by them, and not question or make them feel ashamed for something that is outside of their control.

We stand by you Terry Crews. You and all survivors of sexual assault deserve justice and peace in your situations.

Tweet
abusehollywoodsexual abusesexual assaultTerry Crews
Previous ArticleIndia Labelled As The Most Dangerous Place For WomenNext ArticleShantay You Slay! The (Overlooked) Contribution Of Drag Queens In The LGBTQ+ Community