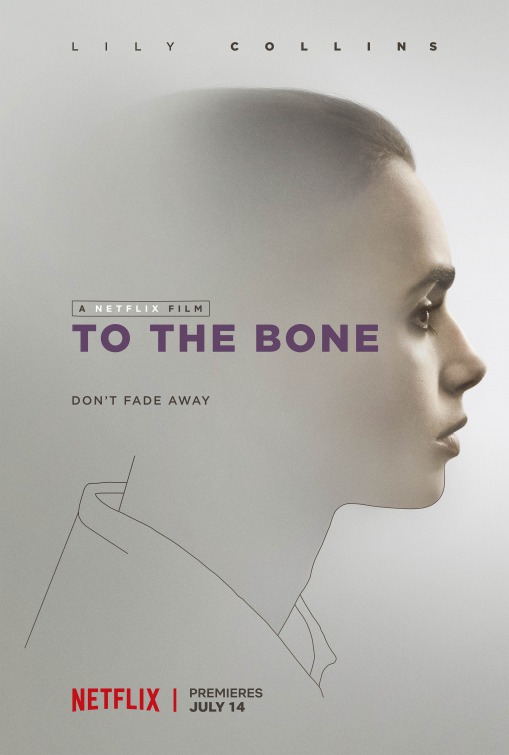 **Trigger Warning: if you are struggling with or recovering from an eating disorder, this film does include some scenes that may be highly triggering

To the Bone premiered on Netflix on July 14th, and is the most recent film that aims to shed light on mental health. It stars Lily Collins as the main character, Ellen, a young artist being treated for anorexia in a group home. The film also features Keanu Reeves as her untraditional doctor, Liana Liberato as her caring sister, Alex Sharp as her friend and fellow patient, and Lili Taylor as her absent mother.

It is well known that many directors, producers, writers, and actors are hesitant towards making a film revolving around an eating disorder because of the triggering imagery; however, Director Marti Noxon did not let that stop her.

In truth, the film is highly triggering. It’s full of scenes and lines that may be extremely harmful to someone recovering from an eating disorder, but before we choose to pick apart and criticize every aspect of the movie, let’s acknowledge it’s good qualities.

1. The movie does an excellent job at reinforcing that an eating disorder often does not just stem from the idea of being “skinny” or “pretty”

The movie highlights that the idea of physical beauty is not near enough to motivate someone to go through such extreme self-deprivation. Dr. Beckham, head of the group home, even specifically tells Ellen that he doesn’t want to hear anything about the food and, when Ellen’s step mother rattles of a list of possible causes, Dr. Beckham assures her that pinpointing a single reason is impossible. The relationship with food was not the focus of the film, instead, it discussed social interaction and childhood influences.

2. The group home does not just consist of skinny, white, blond, females who look like they belong on the cover of a magazine

The Threshold (the name of the group home) consists of a gay, African-American binge eater, a pregnant mother, and a male, anorexic ex-ballerina. To the Bone tries to avoid glamorizing or romanticizing the illness and depicts the patients at very low emotional and physical states. They are seen with tubes up their nose, crying on the bathroom floor, and stomping away in frustration. They are not at all happy and that’s exactly the message Noxon was trying to convey.

3. Ellen does not jump in and out of her eating disorder

By the time the movie begins, Ellen has already been an anorexic for several years and she has been shifted in and out of in-patient treatments. When she first settles at The Threshold, Ellen shows signs of possible improvement, at least within her thinking, and befriends the other patients. But this character does not last. It would be highly inaccurate if Ellen had just become magically cured. Instead, she gets worse and the audience is able to delve deep into Ellen’s struggling brain, which provides some of the most raw and emotional scenes of the entire film.

To the Bone is being considered one of the better and more accurate depictions of an eating disorder on film. Unlike others, the main character does not develop and recover within a two hour span, nor is the emphasis placed on numbers or food; however, screen caps and scene stills have already found their way onto pro-ana websites.

This is not directly Noxon’s, Collins’, or anyone else’s fault; it’s simply the way the community works. Any sort of material will be manipulated and used as “motivation” for those struggling with the disorder. The only way to prevent this type of media is to stop producing material to work with. Yes, it is important to create material like this to educate others on the situation and what the disorder means; however, this comes at a very high price because that material is then used for the exact opposite purpose.

No matter how careful the writers, producers, directors, and actors try to be, there is no stopping the cycle. While the film will receive a lot of hate and negativity regarding the triggering topic, it’s important to acknowledge truly how groundbreaking and emotional a piece like this is. Lily Collins herself has since opened up about struggling with anoriexia in the past. If To the Bone can encourage others to step forward and open up about their experiences and struggles, then the amount of influence it will have is extraordinary.

In the end it is a very tough choice: to educate others and raise awareness or to possibly save the victim. There is no way to create a film about anorexia without any triggers; that’s impossible. But it’s possible to have a healthy conversation regarding the stigma around mental illness. It’s possible to change the pressures society places on body image. It’s possible to address the root of the problem.