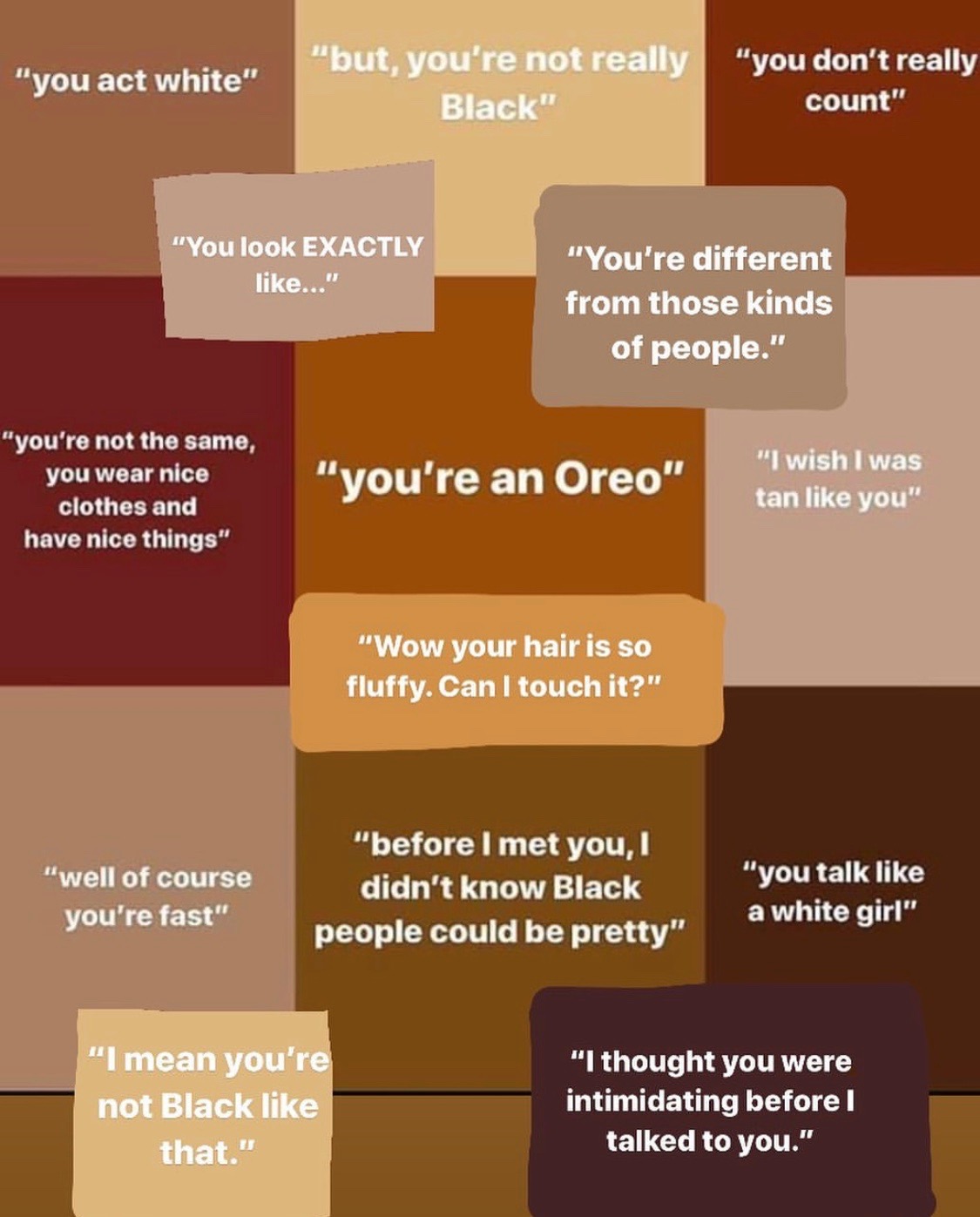 Imagery by Naomi Kemp, an aspiring black artist native to Columbia, SC and a current Senior in the Honors program at the University of South Carolina. Original posted on Instagram at @so_kempt

“You’re one of the whitest black people I know.”

“You talk so white.”

These are some of the most common micro-aggressions I’ve personally faced.

Micro-aggressions and other forms of micro-invalidations, including comments or slights that serve to exclude, negate, or nullify the psychological thoughts, feelings, or experiential reality of certain groups form the next generation of covert racism and individual discrimination (DeAngelis).

“Micro-aggressions are defined as the everyday, subtle, intentional — and oftentimes unintentional — interactions or behaviors that communicate some sort of bias toward historically marginalized groups.”

It is no longer deemed acceptable to be an outright racist. Our societies’ anti-black oppression has transformed immensely, even within the past 50 years only, from Jim Crow policing and government enforcement to mass incarceration. The war on drugs and raids into inner-city communities has morphed into  today’s stop and frisk on the streets.

When you look at discrimination on an individual level, one can again see the role of micro-aggressions and micro-invalidations.  For individual discrimination, we see the implementation of micro-aggressions and other micro-invalidations. Here we also find a change over time. People won’t verbally assault you with overtly racist, homophobic, or belittling comments and hurtful derogatory words. It has now transformed into the covert slights, insults, and invalidations delivered towards minority groups because of their visible minority characteristics.

This image is a great depiction of the distinction between overt ( now deemed “socially unacceptable”)  forms of racism, and what is covert and still “socially acceptable”. Addressing both overt and covert versions of white supremacy is an important first step to  dismantle a system based on oppression, but we need to push the needle forward to cast out the socially acceptable behaviours  as “okay” and hold these behaviours and those people engaging in them accountable.

My first experience with micro-aggressions was in middle school. As an awkward black girl at a predominantly white institution in a nice neighborhood, I stuck out like a sore thumb. I tried to assimilate by straightening my hair and wearing popular white culture brands such as Lululemon, Uggs, and North Face. This seemed to work… to an extent.

I was told, “you are such an Oreo” and asked, “why do you act so white?” These comments highlighted that while I may present with “typically” white behaviors, I would always come off as a Black person “trying to be something I shouldn’t be”. To me, calling me white invalidated my blackness, culture, and personal journey of navigating in many white spaces. By calling me white, they pointed out other stereotypes and biases that are meant to be held by all black people. I realized that I would always be put up and forced to compete against dominant white stereotypes, instead of being appreciated for being me and all my uniqueness. That some of my personal quirks, features, and parts about me, are “too white” to be black, and therefore cannot be black at all. Since I am eloquent, well equipped, and able to correctly navigate in a white space, as a white person might be, I am deemed to be the ‘white black person,’ or the ‘Oreo.’

According to Derald Wing Sue, a researcher and author of the novel, Race Talk and the Conspiracy of Silence, “The power of racial microaggressions is in their invisibility because they represent a subconscious worldview of inclusion-exclusion, superiority- inferiority, normality- abnormality, expressed through the norms, values, and standards derived from a White Euro-American perspective that are imposed upon marginalized groups in our society.”

All I ever wanted to do was fit in, but when I realized no matter how many clothes I bought or times, I straightened my hair, my blackness made me irrevocably different.

While in the beginning, I laughed and joined in on the hurtful jokes about me, I soon learned that by laughing and agreeing with the dominant white culture, I was only further internalizing these racist ideologies and a sizeable societal acceptance of anti-blackness. I wanted to assimilate because I knew in this environment, I was the outcast. Instead of being absorbed into the larger group, I realized that I would always be seen as “the Oreo” or “the token black girl”; I wouldn’t be seen, accepted, valued, or heard for me – all intersecting parts of me.

Black Lives don’t only matter in the streets; they matter in our schools, classrooms, and communities. As human beings and social justice warriors, we need to keep in mind and prioritize the safety of our minority lives in every aspect and section of life. It creates a safe space for black lives like mine, and for every minority and intersection without a dominant voice. We need to continue to actively listen to society’s unheard counterparts and unlearn our conscious and subconscious learned histories of anti-blackness to create a safe community for all.

“What Is Race Talk?” Race Talk and the Conspiracy of Silence: Understanding and Facilitating Difficult Dialogues on Race, by Derald Wing Sue, John Wiley & Sons, Inc., 2016.

“‘What Are the Consequences for Saying What I Mean?”.” Race Talk and the Conspiracy of Silence: Understanding and Facilitating Difficult Dialogues on Race, by Derald Wing Sue, John Wiley & Sons, Inc., 2016, pp. 99–99.

Read Also:
Self-care Tips for Black People Who Are Struggling
Black Lives Should Matter in Health Care Too
Investigating The Motherland: Black Erasure in Argentina

The Muslim Woman That Had Her Hijab Removed

Obama-Care Rollbacks: What You Should Know