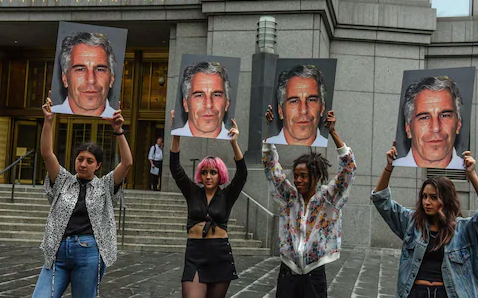 Just a few hours after the apparent suicide of disgraced financier Jeffrey Epstein, mass media jumped on a train of conspiracy theories in an attempt to explain its abrupt and unexpected nature.  From President Trump sharing a tweet that claims that former President Bill Clinton and former Secretary of State Hillary Clinton are responsible for Epstein’s death, to Twitter conspiracists theorizing about the possibility of a murder attempt, it seems that everyone has lost track of the real victims: the women.

In July, federal prosecutors in New York charged Epstein with sex trafficking charges, alleging that he paid hundreds of dollars in cash to underaged girls for sex from at least 2002 through 2005.  The indictment in Manhattan read: “Jeffrey Epstein, the defendant, sexually exploited and abused dozens of minor girls at his homes in Manhattan, New York, and Palm Beach, Florida.” Among these girls, one victim was as young as 14.

Over the past month, a number of Epstein’s victims have bravely come forward to tell their stories and help officials piece together the magnitude of Epstein’s crimes.  However, the recent news of his apparent suicide has created a moratorium on the pursuit of justice, one that puts Epstein’s life above those of his victims.

The Epstein case may have come as a surprise to most of us, but, in reality, the scene of rich, powerful men exploiting young women through sex trafficking is nothing new.  In 2017, nearly 9,000 cases of human trafficking were reported in the U.S., contributing to the $150 billion worldwide trafficking industry.

Most victims are plucked from difficult circumstances and trapped in the cycle of trafficking, sexual assault, and statutory rape.  Those who make it out of the trafficking ring have to continue to live with the scars, trauma, and dehumanization from their abusers.  These are the victims of the Epstein case. These are the people that our President and conspiracists spare little thought for.

One victim, Jena-Lisa Jones released a statement saying this: “I am extremely mad and hurt thinking he once again thought he was above us and took the easy way out.”

Now 30, she said she was just 14 when Epstein paid her $200 to give him a massage at his home before proceeding to molest her.

Jennifer Araoz, another victim who said Epstein raped her when she was 15 years old, told NBC News she’s “angry Jeffrey Epstein won’t have to face the survivors of his abuse in court.”

This frustration is shared by all the women who have endured years of pain and will now never see Epstein held accountable for his crimes.  Some may say his death was the ultimate price to pay, but this was a decision he made himself. By taking his own life, he proved that he was not only still in control of his life, but of some part of his victims’ lives as well.

Although these women will never see justice served in court, that doesn’t mean the United States can not take steps towards legislative justice for victims of trafficking.  This kind of justice comes from closing the systematic loophole that protects rich men in power from crimes, listening to the outcry of victims, and fixing the pipeline of vulnerability that draws individuals into the trafficking ring.

First, it’s worth noting that Epstein is not a lone wolf in his crimes.  In a release of 2,000 pages of documents from a prior lawsuit, alleged victim Virginia Giuffre claimed that Epstein’s former girlfriend, Ghislaine Maxwell, coerced her into having sex with former New Mexico Gov. Bill Richardson, Britain’s Prince Andrew, former Maine Sen. George Mitchell, and others.  They have all denied the allegations and none have been charged with any crimes.

Year after year, our country uncovers incidences of people in power engaged in corrupt schemes.  Whether it be evading taxes, conspiring with foreign powers, or facilitating a sex trafficking ring, our justice system continues to tell law-abiding citizens that you can buy your way out of punishment.

If we want to serve justice in the Epstein case, the first step is to spread awareness. The evidence collected in Epstein’s investigations should be made available to the public and those who assisted and participated in his crimes must be held accountable.  Next, and most importantly, the justice system ought to stand by the principle that no one, not even a rich man, a politician, or a president, is above the law. This principle needs to be upheld in every single case that comes to court in the future.

Additionally, the root cause of sex trafficking must be better addressed.  Some of the biggest factors that lead children and adults into vulnerability are poverty, abuse at home, the prison system, and the glamorization of the sex industry.

Our system fails at providing equal educational opportunities for those living under the poverty line and our prison system does more to punish than rehabilitate.  For children and adults who are without quality education and are not afforded the same job opportunities as everyone else, solicitation of prostitution can seem like the only option.

Our welfare systems, educational systems, and prison systems must be reformed to serve the interests of United States citizens.  In addition to fixing our justice system, the pipeline to vulnerability should be closed and women should be pulled out of the cycle of poverty.

Jeffrey Epstein’s suicide will not halt discussions on sex trafficking and the corruption that our country’s powerful figures engage in.  The victims in the Epstein case and the thousands of trafficking victims that continue to live with pain and trauma deserve more than just news press and more than conspiracy theories over Epstein’s death.

It’s time to bring all-powerful figures such as Epstein to justice and ensure that these victims are the last.

Colorism And Anti-Blackness In The Asian Community 10987