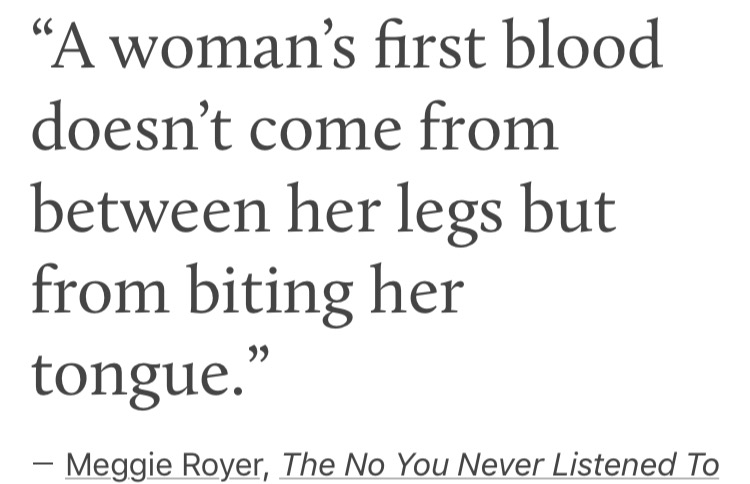 When is it ever the man’s fault?

When do men ever apologize for the trauma they cause? Do they ever even acknowledge it? When do men ever realize how much they put women at risk? All the trauma, all the pain, all the healing we as women have to go through just because of the men we come into contact with is insane, really. It starts with the fathers and their need to rule, to conquer, to claim, to upkeep honor. Then the brothers who want to be the fathers, who get away with everything but will scrutinize your every move. Then the male friends that will objectify you, sexualize you, blame and maybe even hurt you for not wanting to fuck him or be with him, romantically. Then the male romantic lovers who see you again, as a piece of land to conquer, a dumpsite for all his anger, his trauma, his issues, his pain but throw a little of your own trauma in there and oh, you’re too over emotional or oh, you are so dramatic.

Ever seen how a man reacts when his favorite football/soccer team loses? If you have not, let me tell you. He will rage, he will cry, he will swear, he would act as though he got cheated on but if a woman acts that way because she was actually cheated on? Oh, well maybe you know, you were just too crazy, maybe you pushed him to cheat, you shouldn’t act this way, just move on, forget about it.

Why? Why are women always told to ‘forget about it’? Why do we have to forget about the trauma and pain no one else acknowledges that men have the power to inflict upon us? Are we not even allowed that much?

A man would hold so dearly onto his own ego, his own needs, his own pride but at the same time, demand absolute nakedness and submission from the woman he is with. This goes for all men. Men do not know how to apologize and if they do, then it’s all they know how to do. One apology from a man and apparently, all has to be forgotten and forgiven, because hey, he had to actually put down his ego for it, applause please for a man who can utter the word’s but hey, do they mean it?

Men are tricky creatures. They have this ability to apologize (when they feel like it or feel like you deserve an apology) but then their actions could do something completely different and when you, a woman, brings that up, the fact his actions and words do not match, hear him call you crazy for not trusting him, for not understanding. Amazing isn’t it? Men, oh, men. It is somehow always always the woman’s fault. At home, in the friendships, in the relationships.

Being in a relationship, where my every move dictated his moods, the way I was treated. Being in a relationship, where all his anger was my fault, where all his trauma, his pain was my fault, I was never given space to even acknowledge that all my sadness, all my pain, all my craziness that I was blamed for, all my anger and bitterness was because of him. And if I did bring it up, it was always, “oh please, have you met yourself?” or “please, you’re tired? I have to deal with you and you’re such a burden.”

So I swallowed it just like how any good girl in love wanting to keep her man happy and by her side, would. And apologized even, like a fool. But that’s the whole problem isn’t it? His anger, his actions against me, all justified. But mine? Not valid. I was just crazy. He painted me crazy, I felt crazy but who was making me go crazy?

Do men realize that? That they have the ability to drive a woman insane, then have the audacity to blame her for it? Men have the ability to cause trauma that can last generations in a woman’s bloodline. But women keep quiet about it, we swallow it bitterly, we play dumb just like the women before us, because if we faced the truth, if we dug up the demons, the trauma and abuse, would we ever want to be associate with men ever again?

Why are we the dumpsites, the trauma bearers that have to weep silently while our men rage with thunder? We are taught all these rules and regulations just to stay safe from men. And yet, even when we follow those rules, somehow, the hands of men leave claw marks that never fade and he’ll blame your skin for bruising too easily. When will men ever grow up and stop using women as their battlegrounds?

It is your hands that cause the blood shed, the tears, the demons.
It is your tongue, your eyes, your words that cause the trauma, the pain, the fear.
But you claim our riches as yours, you claim our rivers as your gold then leave us barren, with nothing but footprints of your dirty feet on our sands.
But thank the Gods we do not come from men like you.
We come from women who have known hell,
who have birthed themselves from the dirt left by your fathers,
who have birthed us
from the ashes of their own blood
and their blood we carry
and their strength,
we own.

Tweet
feminismmenpainwomen
Previous ArticleYou Are Not Defined By Your Scars: Shoutout To The Ones Who Turned Scars Into Power Through Works of ArtNext Article¿Amigos o amigas?

5 Reasons Why You SHOULD Date Indian Girls 14890

Colorism And Anti-Blackness In The Asian Community 11322