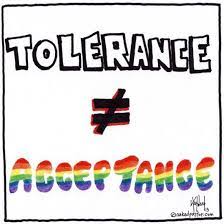 Tolerance, acceptance, and understanding may all seem like very noble ideas to believe in. The dictionary definition of the word tolerance includes acceptance, respect, and appreciation. However, that definition has been wildly skewed when applied to the reality of the world that we live in. In the day and age that we live in, differences among human beings, especially on the matter of race, have become differences in beliefs when it comes to the basic understanding of human rights. If we are going to continue to fight for a sense of equality regardless of race, gender, or sexual orientation, we must not restrict our mindsets to only put up with people but rather develop a sense of appreciation and respect for them.

This fundamental idea must translate to the Black Lives Matter movement if we are to understand that it is at its core a movement for the fight towards fundamental human rights for the black members of our community. To be a true ally and stand at the forefront of anti-racism, every word that we choose to use to further the effectiveness of this movement must be chosen carefully. Even the seeming lack of difference between words such as tolerance and acceptance must be understood for what they are at their core. This basic concept, however, is what seems to be lacking in the mindsets of individuals that support movements such as the Blue Lives Matter movement, created to mitigate the power behind the message of the BLM movement.

The key here, before we delve into educating ourselves on the long-standing history of racism in this country and around the world, is to recognize one thing. Movements such as the Civil Rights Movement, as well as the current Black Lives Matter movement, are being tolerated by the “anti-racist” liberals in this country rather than being accepted as the only truth in which this society and community can survive in harmony and peace. The use of the word tolerance by the white members of our society, our politicians, and those in other positions of power is a slap in the face of the true value and importance of the messages that are being fought for to be spread.

The danger of the word tolerance is something that was always at the back of my mind. Whenever I would hear the word, I would cringe a little because of the level of hubris that often is exuded by the person that uses it. That is not to say that tolerance, by definition, is a negative word. The negativity comes from how it is misused and misinterpreted.

Recently, while watching an interview by Jane Elliot, my long-standing questioning about this word was justified. She stated that today that when we tolerate, we are allowing the other person to be who they are, act in the manner they do and express their differences. However, this idea of allowance is what puts us in a place of authority and power over that person. The two words tolerance and acceptance, while used interchangeably or in harmony with one another, are, in fact, in opposition to one another.

As Jane Elliot states in her interview, when you choose to tolerate another human being, you are reducing them to an inconvenience in your life that you are forcing yourself to learn to live with. Human beings, no matter what their race, ethnicity, or sexual orientation, should never be looked upon as an inconvenience. The autonomy and respect with which an individual should be treated is something that is neglected when we choose to tolerate that person.

Why Strive for Acceptance:

Acceptance, on the other hand, is the message that we should strive to spread and imbibe in our lives. To accept the differences between individuals is to be able to recognize, most importantly, that there are differences and then accepting those differences, all while still maintaining the same level of respect and love. Often those who claim that they “don’t see color” and are ignorant of the negativity that individuals of the black community as well as other minorities face simply for the color of their skin. By choosing to claim that they do not see color, they are preaching tolerance and disregard for sympathizing with the difficulties faced by Black Americans.

The rhetoric used by individuals can alter the course of a movement and the mindset of those participating. While previously commonly used, words such as tolerance have begun to form a negative connotation as they are often manipulated to fit the user’s biases. Through movements that fight for the civil rights and equality of all individuals in our society and community, it becomes integral that we do not settle with tolerating the changing world around us. Instead, we must engage in it and learn to accept it for what it is so that strides can be made to better it.

Read also:
What Does It Mean To Be A White Ally? Take Note From Jane Fonda
Stop Using MLK To Defend Your Hate
The Incel Movement: Formally Recognizing Violent Misogyny As Terrorism

Internalized Sexism: Why Some Women Find Comfort In Tearing Other Women Down