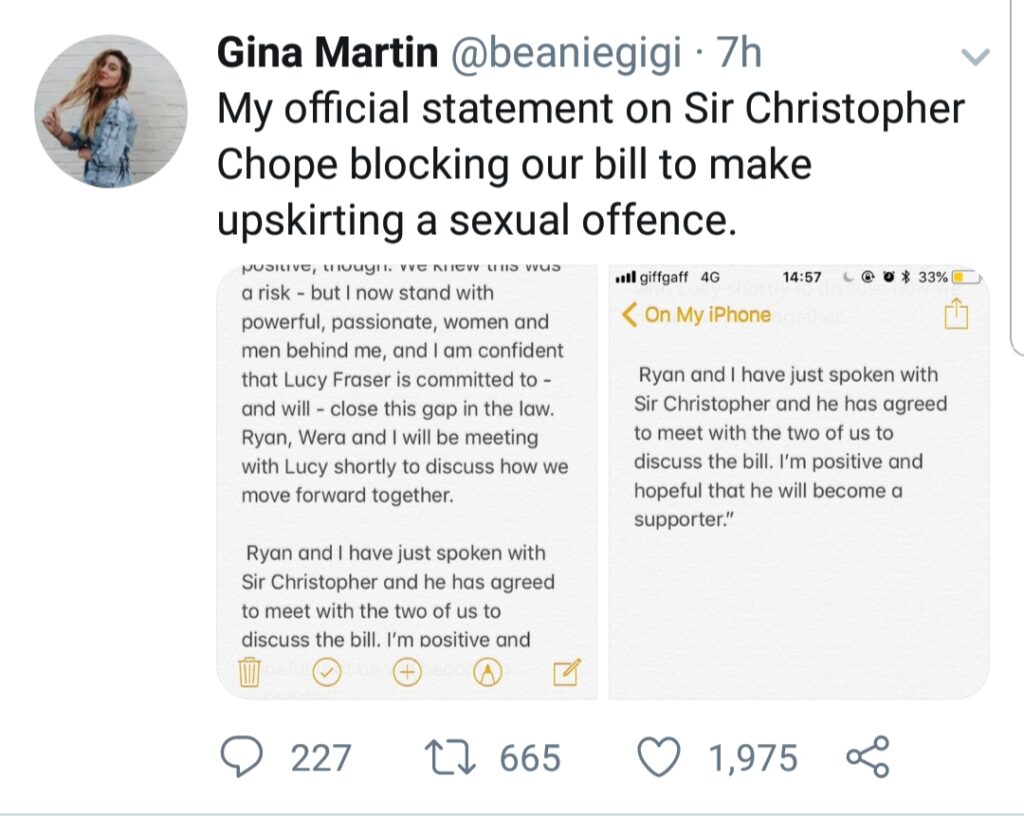 Gina Martin was enjoying a music festival when a man, who had been persistently hitting on her, decided to take photos up her skirt and share them with every contact in his phone.  Finding herself surrounded by men looking at pictures of her “crotch covered by a thin strip of underwear”, she did what many of us would do, she called the police, assuming the man would be arrested and charged for taking and sharing illicit photos without her permission.

Recent legislation about revenge porn would make you think that this disgusting act of sexual harassment is illegal.  As Gina found out, it is not.  The police could do nothing to help her so, like many wronged women before her, she decided to make sure it couldn’t happen again.  She gathered support from MP’s across political parties, got the government to support them and brought a private members bill to the house of commons.  Everybody anticipated that right now we’d be congratulating on her on making upskirting illegal, but once again the patriarchy raised its ugly head to stop us.

This time the ugly patriarchal head came with the face of Christopher Chope, who has been the MP for Christchurch since 1997, one of the safest seats in the country.  At the very last second, Chope objected to the bill, meaning it could not be enacted.  Private member bills, ones brought to the house of commons by someone not in the government, are a common way that things become law in the UK, in fact that is how we got our abortion laws, but they take time to debate that is not always guaranteed, due to the government being busy doing things like declaring dead people fit to work and arguing over just how much of a mess Brexit is going to be.

The bill was being read last minute due to Chode and my favourite MP (joke, I hope he gets stung in the eye by a wasp) Philip Davies talking for four hours about an earlier bill about the use of force in mental health facilitates, an issue I can guarantee you that Davies gives not a single fuck about, given that he is known to physically and verbally intimidate constituents and journalists and called his female constituents ‘zealots’ who want to ‘have their cake and eat it too’ for demanding their fair rights.  In response to his myriad of hateful political views a grassroots non-partisan political movement has sprung up in his constituency of Shipley involved in which are many of my good friends, and yes, we eat cake.  Even people at the bill reading in parliament suggested that Davies and Chope were deliberately talking about the other bills on the agenda, which also included public transport safety laws, freedom of information laws and employment laws.  Even the mental health bill they spoke so long about didn’t get to pass. 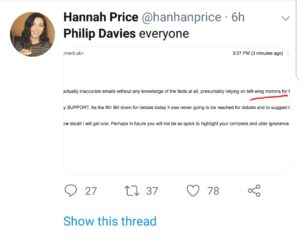 Davies has a record for this; he has talked out free hospital parking for carers, making homes fit for human habitation (yes he’s a landlord, how did you guess?), first aid training in schools, domestic violence, NHS privatisation and a bill that would have banned the use of wild animals in the circus.  What a charmer.  The quirk in our parliamentary procedure (that means bills not talked through by 2.30pm cannot be debated so must pass unanimously) allows men like Davies and Chope to block bills without having to even cast a vote.  Chode was the sole objector to the upskirting bill, Davies didn’t object, he just used his power to mean that he didn’t have to for it to be delayed.  Davies and Chope are proving what all feminists know to be true; the white man only cares about what affects the white man.  And as it turns out, Chope has no idea what upskirting even is. 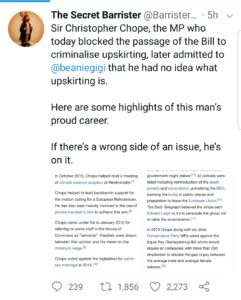 Democracy is something that a country should be proud of, but when men like Davies and Chope are exploiting the system to block bills that don’t benefit them personally they make a mockery of our governments, our elected officials, our democratic processes and of us.  Women fought for the vote and to be included in parliament for too long for our government to be held to ransom by the whims of men who have demonstrated that they care neither for women’s safety or the fairness of our procedures.

As Martin pointed out, it is not the end of the journey.  She has arranged to meet with Chope to discuss the bill and it will be given a second reading next month, however it is a blow that so much work for such a good cause can be derailed by a man so entitled he will object to something without bothering to learn what it is.  Lets hope she persuades Chope not to object this time (and that Davies is on holiday…somewhere cold and rainy). 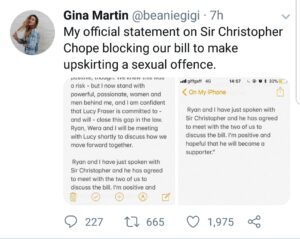