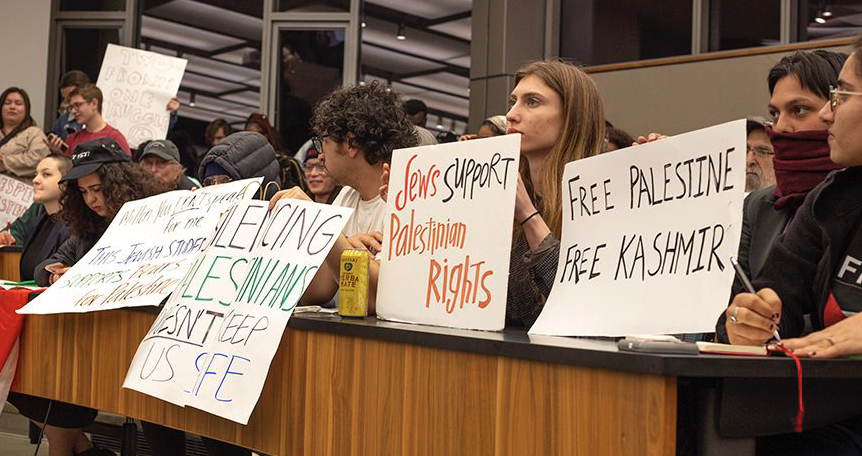 The very choice to remain silent, in the face of tragedies and atrocities, is not neutrality; it is acceptance. Acceptance of the lives being lost, of the groups being discriminated against, of the people being robbed of their basic human rights.

And at the University of California, Berkeley campus, the silence is an acceptance of the threats made against the UC Berkeley’s Bears For Palestine students— all of whom were fighting for their right to have (cubicle) space to speak on and support the Free Palestine movement with— by a white, male student during an ASUC student government hearing.

As seen in a video that has been currently circulating the twitter feeds of local residents, the student stated how, after graduation, he would join the “IDF” (Israeli Defense Forces) in order to “eliminate Palestinian nationalism and Palestinians from the world.” Despite the presence of the senators and members of the student cabinet, he stood his ground, emphasizing his belief that Palestinians “deserved to die.” As the words left this individual’s mouth, no student government member prevented him from speaking, remaining silent as he spewed out hate towards the demonstrating Palestinians and allies.

Despite the horrific comments and lack of student government intervention, the institution remained silent. UC Berkeley has yet to release a statement recognizing and condemning the hateful words uttered at the students in attendance of the meeting; all the UC Berkeley community was met with was quiet acquiescence.

Upon further correspondence with the students affected by these bigoted comments, this was not the first instance of the hatred they face— nor the first time UC Berkeley has remained quiet about them. At past demonstrations, the LGBTQ+, womxn, and Jewish allies of Bears For Palestine were targets of the hate speech by opposers of this movement; from calling them “faggots” and “token Jews” to groping the female demonstrators, no individual at the demonstration was spared from the threatening chants and violating actions.

These negative experiences are not merely byproducts of protests and demonstrations; it is hate speech that further isolates and attacks marginalized groups. Despite these transphobic, homophobic, misogynistic, and islamophobic commentaries, UC Berkeley— a university with an extremely diverse student population— allows this hate speech to echo across campus with no consequences. It has left students feeling unsafe, unwelcome, and unsupported, as their very identities are shamed by the hateful groups on campus.

As a student at UC Berkeley, who wishes not to be named for the sake of anonymity and safety, states, “Berkeley’s silence is deafening. I feel unsafe just walking around campus, especially since the student who threatened us roams free and we have no clue where he is. And Berkeley won’t do anything about it.”

When UC Berkeley, as well as the members of the student government— who are supposed to be representing and protecting all members of their community— fail to speak up about these instances, they protect those who speak hate, alluding to their support of the hateful statements made. In remaining reluctant to provide a statement of support of those affected by the insensitive words given by the student during this already unnecessary meeting; the student Senators, including Senator Milton, dismiss the horrifying behavior by stating that “words don’t hurt anyone.”

But hate speech is not free speech. And silence is not neutrality.

These are two truths that UC Berkeley fails to recognize as they continue to remain silent on the borderline abuse faced by the Palestinian students and their allies. Every demonstration, every event, every rally is met with those who make harmful generalizations and threatening remarks. In not speaking on it, UC Berkeley allows for these students to feel secure in their hateful comments, giving them the misguided courage to continue their hate speech; while simultaneously making the targeted students feel unsafe on their own college campus.

This article is my way to break the acquiescing silence, to renounce the actions of hateful students at UC Berkeley.

What’s your way of ending the silence?

If you would like to assist Bears For Palestine in their Call To Action to hold the UC Berkeley community accountable and support the Palestinians and allies who are facing death threats and harassment, please visit tinyurl.com/BFPCallToAction for further instructions on what you can do.

Tanaya Kollipara
Undergraduate student at UC Berkeley, dedicated to feminist causes and reproductive justice issues. Avid reader and writer, Nutella-lover, and pun-obsessed. There is power in your words and your voice. So use them.