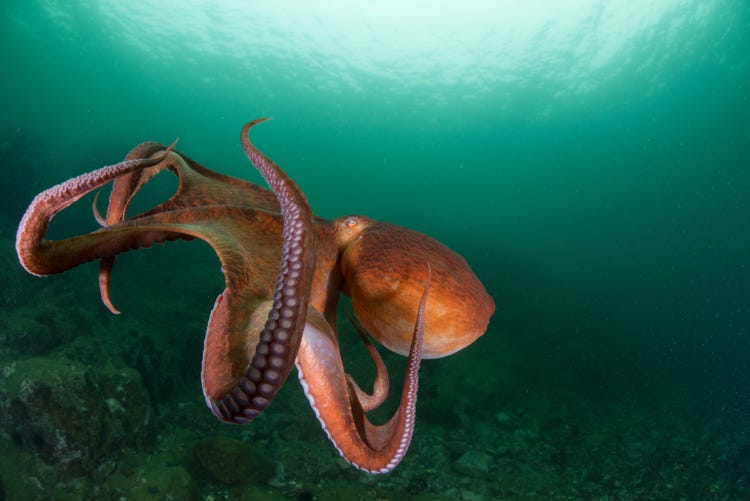 Netflix recently released a documentary titled My Octopus Teacher, where diver and filmmaker Craig Foster forms a unique friendship with a female octopus over the course of about a year. Filmed off the coast of South Africa, the documentary is beautiful in a multitude of ways. Much of the footage is underwater and captures several species’ intriguing behaviors, including the octopus herself.

She’s a common octopus, which has a lifespan of 1-2 years. In many studies, these octopuses have been found to be extremely intelligent, especially for an invertebrate. They can solve puzzles and appear to have personalities. Cephalopods, a group that also includes squids and cuttlefish, are understood to have relatively advanced cognition and problem-solving skills.

The documentary follows Foster as he decides to visit her every day, despite perilous currents and near-freezing temperatures. He sees her play with fish. He witnesses her hunt prey, evades predators, and fight for her life. She can camouflage (color AND texture), or cover herself in shells to hide. After losing a leg in a narrow escape from a shark and being left dangerously weak, she slowly grows back her appendage over time and forges ahead.

Amazingly, she starts to approach Foster when he arrives, reaching out to him and clinging to his hand. She even sits on his chest, almost like cuddling.

Eventually, she mates, lays eggs, and becomes weaker and weaker until she dies. Her body is taken away by a shark.

Of course, this documentary is evidence of how nature can heal and inspire. But I bet not a lot of people read it as a work of feminism. I’ve always admired female wild animals of any species. They are so strong, sacrificial, and instinctive, and so casual about their natural capabilities. They possess a level of strength that humans will never experience. If you identify as a woman and you constantly strive for confidence, maybe you’ll feel some sort of connection to this octopus when you watch the documentary, the way I did.

Octopuses are not social animals, and she lives alone in a den. She can defend and sustain herself. She is, on all counts, independent. But at the same time, she’s playful and is clearly capable of forming relationships. What gives?

I think this is a demonstration of just how multifaceted animals are, and how they have more agency than humans realize. Foster’s “octopus teacher” is cute and friendly, but she’s also a badass. She knows exactly what she needs to survive; she knows what options she has or doesn’t have, and she knows she can only rely on herself.

Embarrassingly, humans, one of the most cognitively complex species on earth, do not even have a grasp on these things. It’s no secret that we’ve lost our instincts, that our idea of what’s “natural” is a perversion. We have overcomplicated what it means to exist on this planet. Foster says the octopus taught him that we are “part of this place, not a visitor.”

She taught me that females are diverse in their power and fierceness across the animal kingdom. They can be so many things, all at once. Also, they can live simply, yet with such nuance. They can be protectors and they can be aggressors. Most species cannot even comprehend the idea of empowerment, yet they live a liberated reality that we struggle to attain. And even though we, as humans, may need more artificial tools to live in the societies we’ve built, I hope we are fortunate enough to someday understand how to be part of this earth.

Read also:
Are You An Emotional Or Logical Person?
Gym Attire: Meant For Working Out Or Dressing Up?
The Struggle Of Hijabi Women

Abortion Is On The Ballot In Louisiana

She. Her. Suicide Bomber