From the 19th century, women and men all over the globe have been fighting against the ceaseless patriarchy. We have gone down a long road. In spite of everything that’s been done and said, we are still at the very start of our fight.

Mary Wollstonecraft was a badass woman who decided to go against the world and express her thoughts on the ages long male dominance. She started the wave of feminism by pointing out the urgent need for women to educate themselves and if not provided, fight for it. Education is the birthright of every individual, regardless of gender. Mary stood out by targeting literary intellectual giants like John Milton, Jean Jacques Rousseau, and Edmund Burke. Men and women have differences in biological construction but it gives no justification to make a presumption that it gives way to the difference in intellect or virtue. I blame the lack of education for the spurting inequalities. Women have longed to be treated as a human, to have the right to make their own decisions. Patriarchy is not just limited to men; the majority of women are also equal advocates of patriarchy. It is ingrained in the minds of masses.

The social construction of gender plays a major role in determining how society is rooted. When a baby is born, the social construction starts at that very moment, children are divided by toys, treatment, education provided, etc. Gender is subconsciously learned over a period of time; people learn how to behave as per the societal norms and expectations. Anything deviant is questioned and resisted by the members of society. Howsoever there are some efforts that we all can make together to uproot the entrenched misogyny in our everyday circles and even on a greater level.

The first step that we must take is to break the chain of social construction by not giving in to the societal norms that cave way to the unending inequalities. Once we start resisting and questioning the significance and authenticity of the norms and rituals, our fight against the inhumane doctrine is started. All it takes is to question ourselves and half of the work is done. The second step would be to unlearn the preconceived notions about gender. One needs to realise that all genders are equal.

This can start by respecting women and considering them equal to men. It starts at home, considering your mother and sister equals in the family as everyone else. Respecting mothers as much as you respect your father. Slowly move to your peers as well.

Education being a major contributor, providing education to all the children would ensure a well-read youth in future. We can make all the changes but it won’t make a difference until women themselves accept that they are equals. All women must realise that they do not deserve to be objectified. They must uplift themselves as well as other women and encourage them to stand for their freedom and respect.

The next step would be making men step out of the bubble of entitlement. The imperative move is to make everyone understand that being a man does not earn the benefit of being superior to woman, nothing does, we are all equals. Being a man does not mean that they are entitled to the privileges that women are struggling to get, the world cannot work that way. There is also an urgent need to decline the influence of social institutions like marriage, family, and religion.

The obsession with marriage in a women’s life needs to be reduced, there is a galaxy more to women than being a mother and wife. While it is completely okay to be a mother and wife, other things should be boosted equally. It is necessary to make women realise that self-independence is much more important than being married and having children. Valuing oneself and working towards self-actualization is more fulfilling.

We all must come together and fight for ourselves. We are born fighters, when have we ever backed out? Be it voting rights, inheritance, education, or even sanitation. This is a lifelong fight. Envisioning a world without patriarchy sounds utopic today, but we’re getting there. One stone a day. 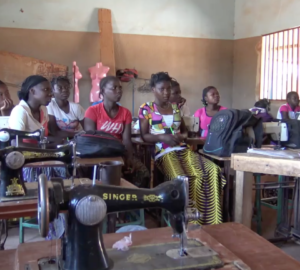