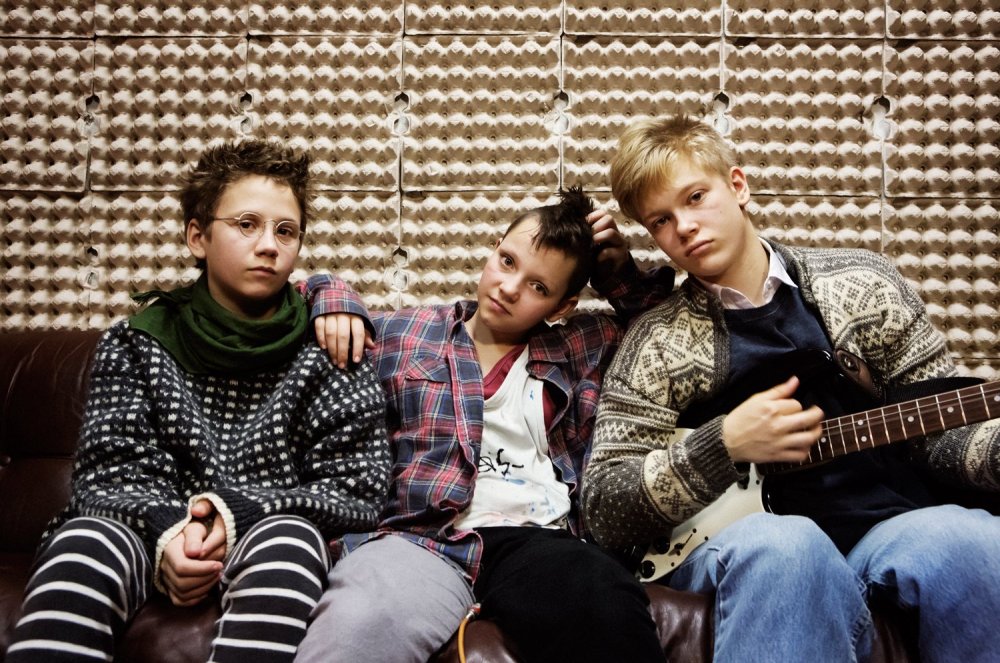 Stockholm; 1982— the sounds of Ebba Grön and KSMB are the hearts of the punk scene in Sweden, and here we have these 13 year-olds getting ready to thrash the society as both your favorite misfits and self-proclaimed “best band in the world” at once.

Directed by Lukas Moodysson (of Lilya 4-ever and Mammoth fame), this movie is an adaptation of the graphic novel Aldrig Godnatt (Never Goodnight) by his wife Coco Moodysson, only with several changes in character names and plot.

Bobo (Mira Barkhammar) and Klara (Mira Grosin) are best mates —with non-binary hairstyles and attires— who share a mutual interest in the punk scene, as well as blossoming leftist tendencies. They are misfits at school, mostly due to their anti-authoritarian views (hating the rules in PE class is one of them, though) and their fondness towards punk that their schoolmates can’t relate— having gotten shouted “punk is dead” at. They somehow see the punk subculture as a means of escape from things they encounter in life for they’re just mad at everything; normie schoolmates who stigmatize punk without even trying to understand it, conformist teachers, parents whom they can’t relate to, the exploitative and capitalist society, and basically the world that had wronged them.

Never having had an experience of playing music before, they’ve never thought of starting a punk band until some boys from the youth center who play in the band Iron Fist started to irritate both girls with their sexist and condescending remarks (and the girls found their music annoying too).

Starting the band with mediocre skills with Klara on bass/vocals and Bobo on drums, they got inspired by their resentment towards PE class on the brainstorming process of their soon-to-be first song. They managed to produce some quite catchy lyrics, though, while keeping it politically woke (“People die every day / And you only care about your football team / In Africa, the children starve / And you only care about the soccer field”).

Realizing that they couldn’t really play, they then thought of recruiting someone else —who can actually play instruments and teach them— to join the band. While in search of another bandmate slash tutor, they came across the classical guitar performance of this one reclusive Christian girl Hedvig (Liv LeMoyne) at the school’s talent show. Despite not being really fond of the genre that she played, Bobo and Klara agreed with each other that it would be best to recruit her, saying something like how it is their duty to befriend the (fellow) marginalized.

They finally got Hedvig into the band, and during their practice, Klara was somehow trying to shove her infidelity on Hedvig’s face by intentionally showing her a certain deicidal tune of Ebba Grön’s called Hang Gud— a song about “hanging god because god is fascist, racist, and does not like the poor nor the blacks”. Klara then stated that Häng Gud is a “Christian song” because “in order to perform the hanging of God, he has to exist first”. While Hedvig attempted to let out some arguments to defend her faith, she still managed to be a patient teacher for those two. On the second time of practice, Bobo and Klara were surprised when Hedvig came forward and played KSMB’s Sex Noll Två; a song that Bobo and Klara regard as “the best song in the world,” and the three became closer ever since. Despite several tensions such as the way Hedvig’s mom disapproves Bobo and Klara’s influence on her or the love triangle that revolves around Bobo and Klara fighting over a member of the band Sabotage called Elis (Jonathan Salomonsson), they managed to overcome the obstacles and maintain their bond as both a band and a group of good mates.

The band got to play their first show when the youth counselors booked them to play a small show in Västerås (yes, it is pronounced the same way as Westeros) along with Iron Fist. What’s no longer surprising is that they, once again, received sexist, condescending, and punk-hating slurs from the audience when they started playing. They managed to retaliate by causing a riot that the show ended up to be stopped. While the youth counselors were upset at them due to the riot, they were downright satisfied at how they managed to beat the living hell out of the audience as they claimed themselves; “We are the best!”

It’s fun to see these 13-year-olds who are just mad at the rest of the world singing out “the world is a morgue but you’re watching Bjorn Borg”, fangirling over KSMB, and joking about hanging god just like what Ebba Grön sang. The on-point political references happen to be one of the highlights as well— just like how Sabotage’s song is titled “Brezhnev and Reagan fuck off”. The music references are well-curated and the soundtrack could also introduce some basic insights on the Swedish punk scene.

Being misfits of the society and blossoming young anarchy are the core themes of this movie, and the main actresses presented it well; the kind of leftist stance that is innocent and still has a long way to go in terms of deeper understanding, but filled with wholesome aspirations to build a greater, more intersectional world. It is also enlightening to see these three main characters’ non-binary expression and how they are struggling to tackle sexism around their surroundings, but it is also sad to see how these sexism-related scenes in the movie are just representations of what actually happens in everyday life. During the Västerås scene, when Iron Fist played, the audience’s feedback was just fine, but just about the time the three girls’ band started playing, they immediately got condescending slurs which most likely happened just because they are women. The thing with Iron Fist’s condescending remarks at the beginning of the movie as well. We’ve had enough of the society discriminating women in punk, but mostly, women in general.

The chronicles of those three are going to get stuck in your heart, and they’re going to be your favorite misfits anytime soon; seeing them grow and evolve is heart-touching. Aside from that, Liv LeMoyne did a good job in performing an acoustic rendition of Sex Noll Två.