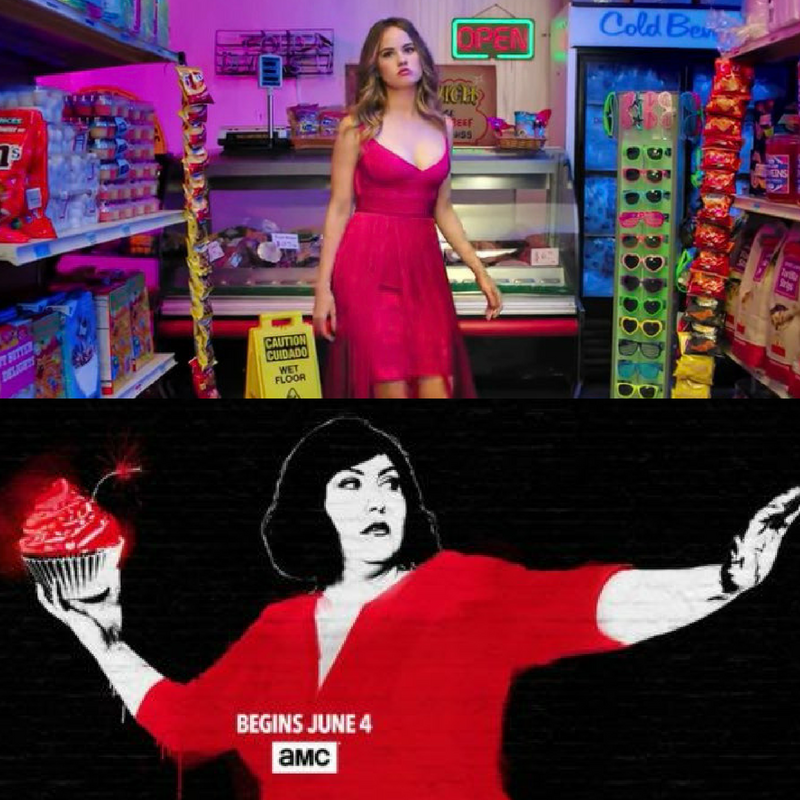 At first glance, there are several similarities between Netflix’s soon-to-be-released show Insatiable and AMC’s new show Dietland. Both follow the stories of women (or, a young woman in the case of Insatiable), who are fat and hate their bodies due to the social stigmas it carries. Both experience anti-fat hatred, bullying, and violence, and both wish their bodies were different, affording them the ability to “fit in.”

(Spoiler ahead for Dietland watchers)

Both also have life-changing experiences after strange men on the street punch them in the face. Patty, the main character in Insatiable played by Debby Ryan in a truly ridiculous fat suit, has her jaw wired shut, allowing her to stop eating long enough to become thin and “beautiful.” Then, she seeks revenge against those who teased and tormented her. Plum, the main character in Dietland played by Joy Nash who is an actual fat person (*gasp*), retreats to a home for wayward women seeking self-acceptance where she realizes her self-worth. Then, she seeks revenge against a society that oppresses women of all sizes by rejecting her internalized fatphobia.

Looking more deeply at both shows, there are some important differences between them: Ryan is a thin young woman who fits into Audre Lorde’s “mythical norm” and exemplifies Western beauty standards while Nash is a thirty-something woman who is fat; Patty undergoes an external transformation and seeks revenge against the individuals who hurt her while Plum undergoes an internal transformation that leads her to seek systemic solutions to fatphobia; After their epiphanies, Patty assimilates while Plum purposefully positions herself in opposition to beauty standards and respectability politics; Insatiable reaffirms tropes and stereotypes of fat people while Dietland challenges them. In Patty and Plum, two roads to fat liberation diverge.

As a fat woman watching how these fat women navigate fatphobia and conflicts with their bodies, I see myself reflected in both Patty and Plum. I think most fat women probably can. I see these representations knowing that fatness is considered a socially unacceptable excess, especially when women are fat. Fatness exemplifies an excess of body mass, of food consumption, and of laziness. I see these representations knowing that fat women are understood as having “lost control” of their bodies. I have been like Patty, looking longingly into my full-length mirror hating the excessive, fat body that I saw looking back at me. I have felt powerless like Plum, and have, too, schemed how I might be able to save enough money for weight loss surgery—to rid my body of the excess that caused me to hate it.

When Ryan removes her fat suit and steps out into the world, she is accepted, perhaps even lauded for her willingness to portray such a pitiful character like Patty. But Nash does not have the ability to simply step out of her fat body. Fat women navigate a society that devalues us and frames violence and oppression as our fault because of our bodies. Society has taught us that our worth is dependent on our appearance and value others find in us. We have been taught that the way to find value in ourselves is to conform to Western standards of beauty. And, as pre-epiphany Plum illustrates, many will do anything to conform to it.

For me, Patty and Plum represent two expressions of fat rage. Fat rage, like fat people, is seen as something excessive, dangerous, and socially unacceptable. It destabilizes social hegemony and threatens the status quo. Fat rage is an embodiment of the agency and subjectivity fat women are supposed to lack.

Patty’s exterior transformation means that on the outside she no longer represents the excess of fatness, but she nevertheless continues to embody this stereotype through her excessive—or insatiable—demonstration of fat rage. At one point in the trailer, she is said to be “out of control” before we see her setting a hotel room on fire, punching classmates, and driving manically. Patty’s internalized fatphobia prohibits her from channeling her fat rage at the systemic nature of fat oppression.

Plum does not undergo an exterior transformation and continues to physically represent excessiveness. She is not able to assimilate like Patty, who participates in beauty pageants as her entry point to revenge against her classmates. Despite undergoing an internal transformation in which she comes to recognize the systemic nature of the fatphobia she deals with, Plum continues to experience anti-fat violence and fetishization throughout the series. Plum is punished for embracing her fat rage, which is something we do not see occurring to Patty from the trailer Netflix released. (Spoilers ahead) When Plum dresses in ways fat women “shouldn’t” strangers catcall her and friends concern-troll her. When she goes home with her date he rapes her.

I see these two representations of fat rage knowing that there is no “acceptable” way to combat systemic fatphobia. Express rage like Patty, who is in many ways (mis)guided by her internalized fatphobia, or express rage like Plum, who faces even more physical, emotional, and rhetorical violence when embracing her fatness.

But, another difference between the two women’s narratives is important, though. Patty acts alone to express her fat rage at particular individuals. Plum, however, is expressing her fat rage in tandem with a larger rejection of misogyny—Jennifer. We have yet to find out if Plum will become directly involved with Jennifer, but the connection is clear: Embracing our fat rage as individuals free of internalized fatphobia is important, but there is greater power in acting as an intersectional collective.

Cassidy Ellis
Cassidy is a PhD student, activist, and movie lover from the U.S. Deep South, who currently lives in Colorado. She likes her tea sweet, her coffee strong, and her feminism intersectional.

The Type of Sexual Assault We Don’t Talk About: Coercion 18240

Colorism And Anti-Blackness In The Asian Community 10972