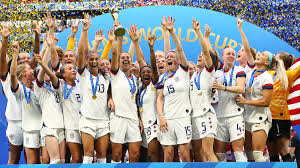 Sunday, July 7, 2019. One talented, dedicated, powerful, beautiful team. One mission: To defend a title and emerge victoriously. July 7, 2019. A day that will go down in herstory. A day that continues to inspire all the young girls out there. The future is filled with fierce females, that’s for sure.

The world gathered around television sets to witness the exciting yet anxiety-inducing final between The United States and the Netherlands. I certainly did. With bated breath, I watched as our women from The United States continued to play with confidence, determination, and reliance on one another. They did this during every game, and they weren’t going to stop now. In fact, nothing could stop them. These twenty-three women truly work together as a team, as a family. And, it paid off. A 2-0 victory over the Netherlands! Four stars on their shirts. Four women’s World Cup titles. Champions.

In the first half of the game, the Dutch came in strong. They were fierce and unafraid of the renowned women’s team who had previously won the World Cup in 2015. Neither team scored within the first half. All of this changed after half time, though!

The United States Women’s National Soccer Team won the World Cup with goals made by forward Megan Rapinoe and midfielder Rose Lavelle (at just 24 years old, this is a huge accomplishment).

Scoring that goal in the final was definitely significant for Megan. Megan, (as well as other members of the team), faced criticism throughout the World Cup. From how they celebrate goals and wins, to words with President Donald Trump, it was as if they were placed under a microscope while doing what they love. However, this did not knock any of them down or break their spirit. Instead, this team showed the entire world what women are made of, what women are capable of, and which sport women now dominate. They are inspirations to anyone who has ever been criticized and judged.

Lastly, the USWNT inspires those who are members of the LGBTQ+ community. With many openly gay women on this team who speak out about equality, the USWNT teaches those in the community to be unapologetically you.

They Run The World

Who run the world? The United States Women’s National Team, that’s a no brainer. Together, these fierce competitors are taking the world by storm. They’ll never let anything stand in their way. And, that is incredible!

Now, it’s time to give them equal pay.