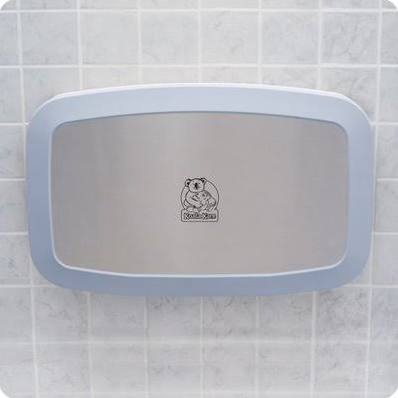 I don’t know exactly when or why I realized this, but it was a thought that just popped into the back of my brain one day. As a girl, I obviously haven’t been in many men’s restrooms. But growing up, I was in a Girl Scouts troop, and my leader, this kickass lady, would tell us to just use the men’s room when we would be out at an event or camping, if the ladies’ room had too long of a line (as it always seems to!) Even during these quick excursions in to the men’s restrooms, I didn’t notice the glaring absence of something…probably because I was focused on getting in and out of the stench as fast as I could!

So what was it that was missing in the men’s restrooms? Baby changing stalls! I slowly started to see that this was lacking when I was in an airport (ladies’) restroom one day, and saw a dad shyly make his way into the restroom, mumbling apologies, not making eye contact with anyone, and go directly towards the baby changing station. I thought, hmmm. There must not be a baby changing stall in the men’s room. Weird. Struggling with one rambunctious toddler, one fussy baby that needed changing, and overloaded with luggage, I saw in him the same exhaustion, airport delirium, and determination I see in mothers, and I felt bad for him that all the women in the restroom were giving him dirty glares and avoiding him. After all, mothers with young boys go into the women’s and men’s rooms all the time.

So, why aren’t there any baby changing stalls? Historically, taking care of babies was the woman’s job. A woman’s role in society was only to be a wife and a mother, and all nurturing and child-rearing would fall onto her. With such a backwards ideology, we can see why restrooms were built with baby changing stalls only in the women’s restrooms- men were not helping change diapers! But now, many couples with children share the responsibilities. There are so many different types of families in the world, with different dynamics. There are gay fathers, who would appreciate not having to use the women’s room to change their babies! There are single fathers, whether by choice or circumstance, who deserve to have a comfortable place to change their babies! The woman may be working while the man stays at home. Or maybe the couple wants to split all the work 50-50! No matter what the situation is, it would definitely make things easier for all parents involved if all bathrooms had diaper changing stalls!

Many single fathers and fathers who do share child-rearing responsibilities say that it is awkward and can even be downright uncomfortable to change their babies in the women’s restrooms. They say women are uncomfortable, which they understand- they don’t want to scare them or make them unsafe, which is another reason having changing stalls in the men’s rooms would be great. Many fathers also report that they enjoy these moments with their children, and find them to be important for bonding, education, and intimacy. No parent should be stripped of that!

If men’s restrooms also had baby changing stalls, I think it would be a lot easier for all parents! It would be so much more convenient. I think it is a step forward that we need to soon take.

Back On Valor: Why Courtney Skippon Is My Favourite On This Season Of ‘Below Deck’