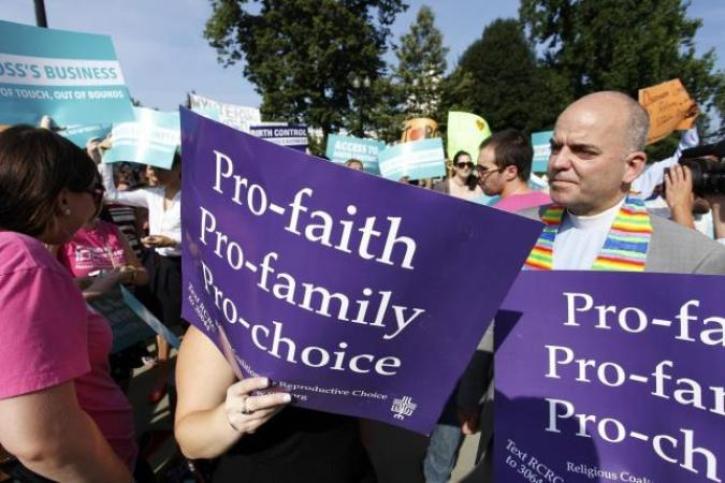 Last Sunday, my church held a discussion about abortion in response to the recent New York and Virginia abortion laws.  From quoting Ronald Reagan in saying, “I’ve noticed that everyone who is for abortion has already been born,” and criticizing Democrat politician Beto O’Rourke for rejecting restrictive laws on abortion, my church took a clear political stance, one they call “Pro-Life.”

Towards the end of the sermon, the priest listed the top reasons women choose to have abortions. When the list got down to health, the priest said that most health issues in abortion are not physical, but instead mental and emotional.  He continued by praising states that banned women’s abortions after 20 weeks because “women’s health” is too broad of a statement.

As I sat in the pews, I couldn’t help but wonder why the church, and all the people nodding and saying “Amen”, were devaluing women’s rights because they considered mental and emotional health to be insignificant compared to physical concerns.  The solution, the priest said, was to be hospitable towards women and to help them in their periods of struggle during pregnancy. This is something I can get behind. However, if a woman who was contemplating an abortion was sitting and listening to that sermon, they would only feel shame, not the love that churches claim to uphold.

When it boils down to abortion laws in America, there are two clear sides that appear: Pro-Choice and Pro-Life.  Although many people believe that Pro-Choice is full of abortion-loving people, the reality is quite the opposite.  Many Pro-Choice activists believe that abortion is not necessarily a “moral good,” and would not have an abortion themselves.  However, many women, including myself, recognize that they’re not in the position to tell other women what to do with their bodies.  Thus, the difference between the two movements is that one offers a choice.  The other takes the choice away.

On the other hand, the Pro-Life movement always confused me.  The word “life” is so broad, and I find that many Pro-Life activists cherry pick which lives they value.  For example, are Pro-Lifers willing to fight for all the immigrants seeking asylum in the United States, withdraw from all foreign wars the U.S. is involved in, and provide universal health care to all citizens?  Are they willing to allow third-trimester abortions when a woman’s life is at risk? These inconsistencies lead me to the conclusion that there are two movements: Pro-Choice and Anti-Choice.

As a Christian, I’m aware of the Bible’s stance on life.

Psalm 139:13 reads: “For you created my inmost being; you knit me together in my mother’s womb.”  In addition, there are numerous Bible verses that detail the beauty of life, beginning in the womb.  It’s clear that Christianity believes that abortion is wrong. However, bringing politics into the abortion debate in the church adds fire to the wrong movement.

When people push to restrict abortion laws, or even ban abortion altogether, they only ban safe and legal abortions, not abortions in general.  Before Roe v. Wade in 1973, women’s mortality rates from illegal abortions were exponentially higher than they are today with legal abortions. Additionally, abortion occurred at a 13% higher rate decades ago when abortion was illegal than today when it’s legal.

Looking towards countries that criminalize abortion or lack access to reproductive health care, it’s evident that abortions occur more frequently and dangerously.  As a person who truly values life, I stand with the Pro-Choice movement.  Allowing doctors to be proactive in the abortion process gives women the opportunity to learn all the effects of abortion and options she is provided with.

Recent legislation to restrict doctor involvement in pregnancy cases directly undermines life.  In 2017, Anti-Choice activists rejoiced at a Texas bill that withheld information from pregnant women.  This prevented women from suing doctors if their child was deformed or disabled – even if the doctor knew of the potential condition and didn’t tell the parents.

Hiding information for the sake of forcing women to go through with their pregnancy goes against all moral and scientific values.  At a point where tests are readily available for women, a movement that claims to value life should not decrease doctor transparency.  The improved access to reproductive health care has only saved more lives in the past years. Any movement that impedes on this progress is inherently hypocritical.

Furthermore, the most recent New York Reproductive Health Act only works towards saving lives, not taking them away.  As Democratic state Sen. Liz Krueger says, a health care practitioner “may perform an abortion when there is an absence of fetal viability, or the abortion is necessary to protect the patient’s life or health.”

While third-trimester abortions may be alarming for many to think about, these late abortions are extremely rare and largely restricted by most states.  New York’s carefully crafted legislation limits the circumstances of late abortions by only providing them to women whose lives are at risk, or if the baby would not survive the pregnancy.  If the church chooses to cite the “miracle of life,” they should be in support of legislation that works towards saving women.

According to the Bible, everyone sins.  However, it’s no one’s responsibility to judge others for the decisions they make.  As a Christian woman, I know where I stand when it comes to abortion and the choice I would make.  I also know that all pregnant women have different stories that need to be addressed differently. The most that Christians can do is be there for each other and provide love and comfort.

I’m proud to live in a country that is not governed by Christianity, but instead by the people.  With a melting pot history, the United States has prided itself on accepting different values and not imposing one moral code on all its citizens.  This is fundamental when considering the future of abortion debates in our country because no single religion has the agency to dictate others.

After Sunday’s sermon, my position as a Pro-Choice Christian was reaffirmed.  A religion or government should not meddle with women’s issues, especially because we’ve learned from history that that only takes more lives.  Therefore, the message of my church didn’t resonate as Pro-Life, but instead Anti-Choice. The moment we take away a woman’s choice, we take away the most fundamental natural rights that belong to women and women only.