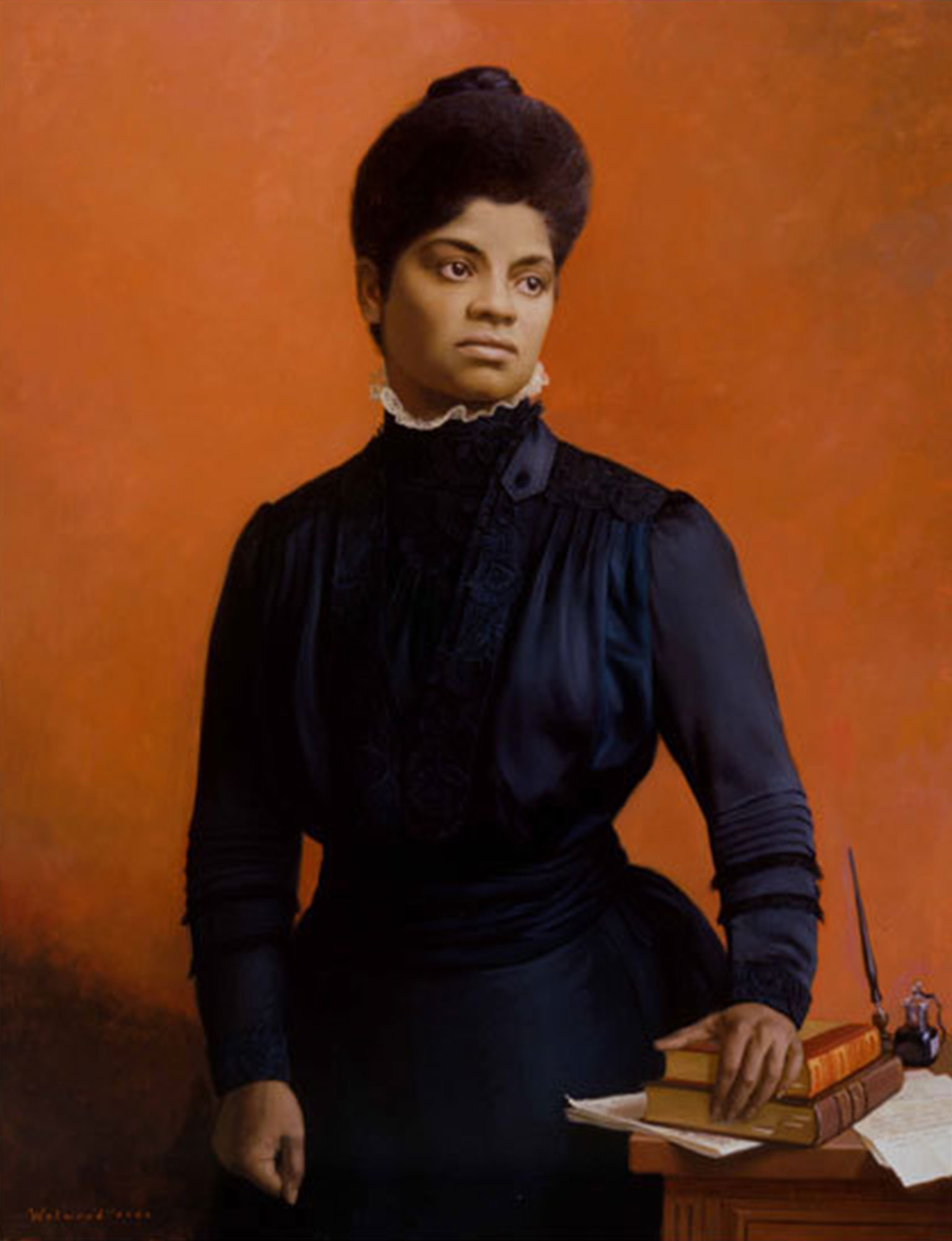 Painting of the Activist, Ida B. Wells

On the second day of Black History Month, I have decided to write about Ida Bell Wells-Barnett, commonly known as Ida B. Wells. Wells was a journalist and a black rights activist, most influential in her anti-lynching crusade of the 1890s.

Ida B. Wells was born a slave, in Holly Springs, Mississippi, on July 16, 1862. Shortly after Wells’ birth, the Emancipation Proclamation announced the freedom of all slaves, including Ida B. Wells and her parents, Lizzie and James. Unfortunately, life in Mississippi was not kind to the Wells family, and they soon faced the implementation of Jim Crow laws, racial prejudice, and discriminatory restrictions.

Lizzie and James Wells were active participants in the reconstruction period republican party, the party of Lincoln. Wells’ father, through his involvement in the Freedman’s Aid Society, helped to found Shaw University, now known as Rust College, which provided education for the newly freed slaves. Ida B. Wells received her schooling at Shaw University, but as family tragedy struck, she was forced to drop out at age 16. At just 16 years old, Ida B. Wells lost both of her parents and one of her younger siblings to an outbreak of yellow fever. This left Wells’ siblings in her care. Ida B. Wells was able to convince a nearby country school administrator that she was 18 years old, and secured a job as a teacher.

In 1882, Wells moved to Tennessee to live with her aunt and get help raising her sisters. While in Tennessee, Ida B. Wells was able to continue her education at Fisk University in Nashville. In May of 1984, Wells’ experience on a train from Memphis to Nashville would galvanize her and motivate the activism and journalism of her later life. Although Wells had bought a first-class ticket on the train, a crew-member asked her to move to the car for African Americans. When Wells refused, she was forcibly removed from the train. Wells sued the railroad over the racist incident and won a $500 settlement. Unfortunately, the Tennessee Supreme Court overturned the decision, and Wells was unable to collect the damages.

Following this grave injustice, Ida B. Wells began to write about her experiences and the issues of race and politics in the South. Wells’ work was published under a pseudonym, “Lola,” in several black-owned newspapers. Wells would go on to own the paper, Memphis Free Speech (later Free Speech). While working as a journalist, Wells also taught at segregated public schools in Memphis, where she advocated against the existence of black-only schools.

In 1982, three Black business owners—Tom Moss, Calvin McDowell, and Will Stewart—were attacked at their grocery store because a group of white store-owners felt the new store was taking away their business. During the struggle, some of the White men were killed. Moss, McDowell, and Stewart were jailed for the incident, but before charges could be brought up against them, they were brutally taken from their cells by a lynch mob and murdered. Ida B. Wells refused to stand this inhumane treatment any longer; she traveled around the South, gathering information on lynch mob incidents and wrote articles decrying the lynching of Black men and women. One piece incensed the white citizens of Memphis so much that they broke into the office of her newspaper and destroyed her equipment. Wells was told that she would be killed if she returned to Memphis. Ida B. Wells continued to write about lynching while in the North, issuing an in-depth report in the New York Age.

In response to news that black exhibitors would not be allowed at the 1893 World’s Columbian Exposition, Wells wrote and distributed a pamphlet named “The Reason Why the Colored American is Represented in the World’s Columbian Exposition.” The pamphlet was funded and supported by two famed advocates for civil rights, Frederick Douglass and Ferdinand Barnett (who she later married). The same year, Ida B. Wells published a personal examination of lynchings in America entitled, A Red Record. Her anti-lynching efforts led her to form a march on Washington D.C., which called for reforms by the then President, William McKinley.

Before her death in 1931, Ida B. Wells founded several civil rights organizations. In 1986, she developed the National Association of Colored Women. In 1908, she attended a special conference for the newly formed organization that would go on to be known as the National Association for the Advancement of Colored People (NAACP). Wells is considered a founding member of the NAACP. Wells also called for equal work and equal pay for women as part of her work with the National Equal Rights League.

“I felt that one had better die fighting against injustice than to die like a dog or a rat in a trap.” -Ida B. Wells

A Woman’s Guide To Surviving The Next Four Years

Hello, everyone! I am Lydia, a 21 year old law student from Tampa, Florida. I am currently attending school in Maryland. My interests focus mostly on Middle Eastern studies, International Law, Human Rights Law, and Immigration Law.