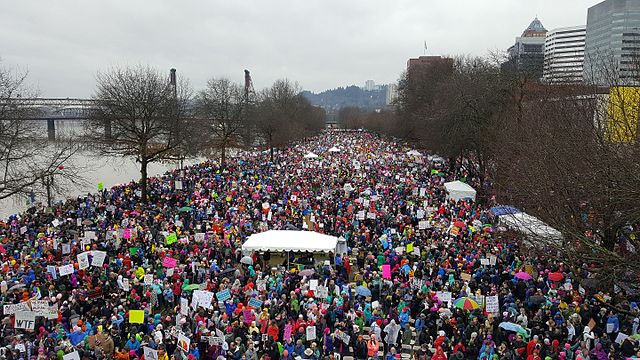 On January 21, 2016, women across America and the globe marched against the inauguration of Donald Trump. Women came together to support each other in what was an attack against their rights as humans. This was the largest protest against a Presidential election in history, and it truly was amazing. In theory and on paper, this march was perfect. March for the rights of women, people of all colors, religions, and sexual orientations, what could be wrong with that?

Black women are assaulted and harassed by police officers, but often it goes unnoticed. Often it takes a large case, or a story with many discrepancies to make the news, for anyone to pay attention. The last widely covered case was that of Sandra Bland back in July of 2015. Any other story gained exposure through a multitude of social media, rarely a major news outlet. The women whose lives were lost were not deemed significant enough to warrant outrage. The now president of the U.S often made excuses as to why police officers were disproportionately targeting black people, he once claimed that the officers “choked.” No one says anything.

Muslim women are often the targets of Islamophobia based attacks. They are easy targets because of the hijab; a religious headdress used to preserve modesty. Discrimination is against the law, but it is a known fact that subtle racism often goes unchecked in our society.  They suffer silently, not being able to fight an oppressive system that was created to cater to a few. The now president of the U.S wanted a database to track all the Muslims in the country; this is his solution to the terror and fear these people live in. No one stands up for them.

The members of the LGBT community were, until June 26, 2015, viewed as second class citizens. Even now, after being given the right to marry, it is being threatened. The fact that the marriage equality act can be taken away is a real and legitimate fear in the hearts of many Americans. Many know that it is unfair to deny two people in love the right to be a recognized union under the law, but the new government might make that a reality. There is a slight ripple in the water, but nothing significant.

Then U.S president made comments about making abortions illegal and preventing access to other services and products regarding women’s reproductive rights. This particular issue resulted in outrage from across the country. People only then began questioning whether or not this person was the right person to have in the office, but at the time, they had hope that the Democratic nominee would win the election and protect them.

In the end, the worst of the worst happened: the republican nominee won. Not only did he win, but most of the government is republican as well. This raised fear in the women who had been relying on the Democrats to protect them. Suddenly every fear was now a reality, so they decided to do something about it. A march, not any march, but one to protest the unfair beliefs that would soon become law in their country.

Somewhere along the way, they decided, “Hm, maybe the other women, the ones who’ve suffered longer and harder than us should tag along too.” And so the Woman’s March on Washington was born.

The march was based on a pretense of intersectionality, but it was just that: a pretense. The facts remain that until the rights of white women specifically were attacked, they as a whole could care less about the struggle that did not affect them. It did not distress them, so it did not matter.

For this reason, and this reason only, I cannot stand behind this march. The hypocrisy is too much to ignore, and these women came out of the woodworks to advocate for women everywhere because it was convenient for their cause at the time. They weren’t there before, and it can be confident that after their rights are secured, they will melt back into the shadows and ignore the sufferings of their fellow woman once again. They only need this solidarity between all women because it furthers their cause; it makes it look inclusive, accessible to everyone, a movement for everyone.

Which, in the end, is complete bullshit.

This Is What It Means To Be A Feminist