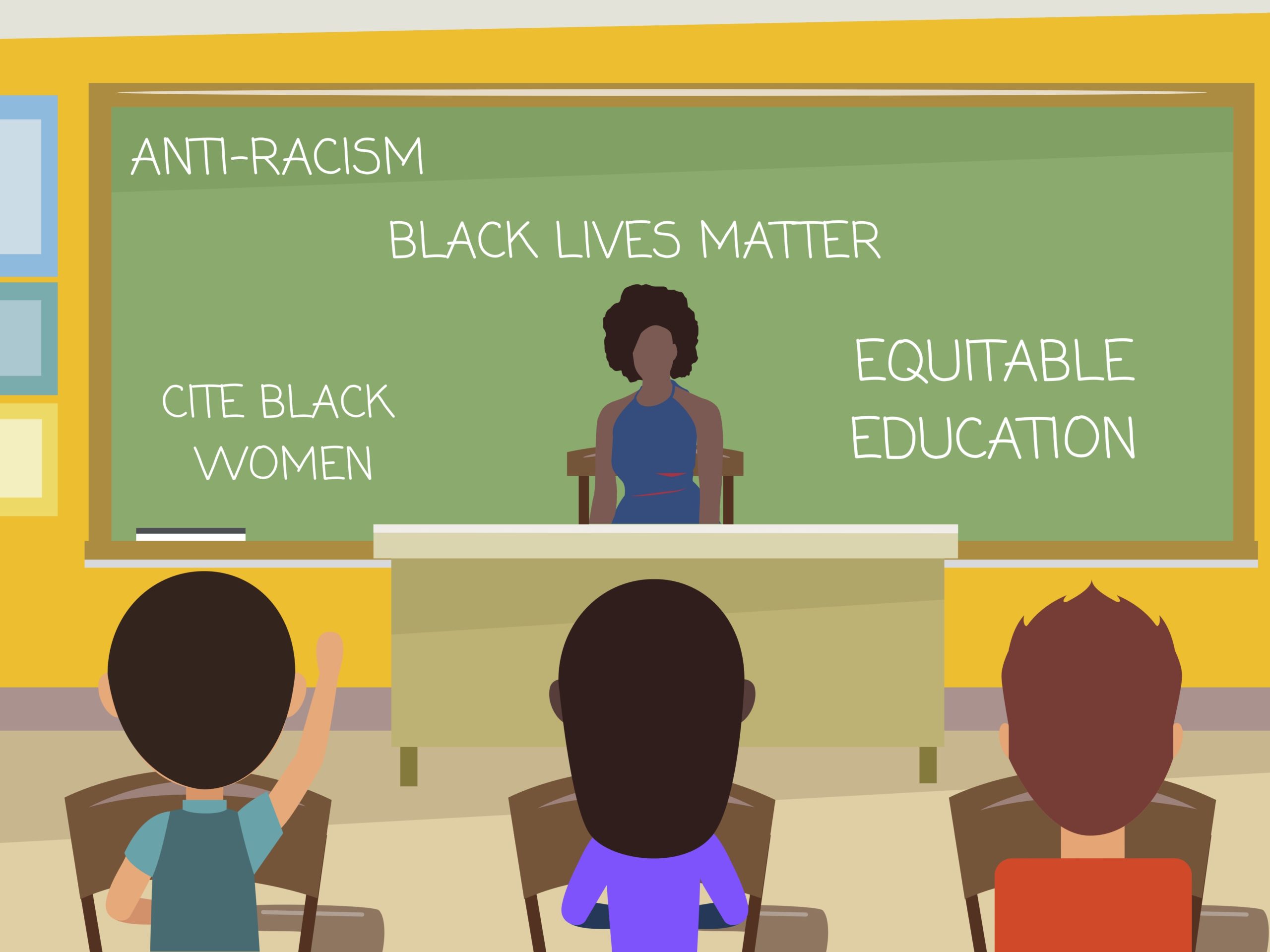 Disclaimer: Before I begin I want to acknowledge that I am white, cis-gendered, a student, and not an expert on this topic. While I don’t always see myself represented in higher education, I am far more represented than my BIPOC classmates. The information I’ve gathered is from peer-reviewed studies and journal articles combined with my thoughts.

In early June, a page on Instagram called @dearpwi started posting stories from BIPOC students at PWIs (predominantly white institutions) around the country. These stories span from interpersonal microaggressions from peers, friends, and significant others, to prolonged institutional neglect and harm-doing. Colleges have a lot of work to do to protect the BIPOC members of their communities. White administrators, professors, and students share the bulk of the responsibility to do this work.

Since the founding of most of these predominantly white colleges, people of color have been the exploited foundation of white prestige. The theft of Black bodies for research at the most prestigious American medical schools (Johns Hopkins) was common practice in the 1800s. It would be difficult to find an institution of higher education that didn’t have deep economic ties to enslavement. (For more information on this topic, read Ebony and Ivy: Race, Slavery and the Troubled History of America’s Universities by Craig Steven Wilder).

Colleges can do better.

One of the things colleges can do to improve is to make changes to their curricular requirements. Specifically, colleges need to address:

These items are some of the pillars of an inclusive college course, or what some would call a “diversity requirement.”

The idea of “diversity” itself is controversial. PWIs like to use diversity as their one-way ticket out of criticism. “Diversity” on its own is not enough. Too often, schools brag about their “diverse” student bodies without doing anything to protect and care for the BIPOC students they’re so proud of. However, a more diverse body of content in our course loads would be a good thing.

What are diversity requirements?

Diversity requirements take many forms. Some schools opt to have a single “diversity” course, which all students are required to complete before graduation. Other schools approve lists of classes, which are “diversity” courses. The point of these classes is to better educate all students about experiences, unlike their own. These courses should present intersectional perspectives. They should show how every person’s race, gender, sexuality, ability, class, citizenship, and more, inform their lived experience. Courses should also require students to self-reflect on their social positioning, experiences, and roles in structures of power.

Multiple studies have shown that “diversity requirements” can be effective at reducing bias and prejudice in college students. However, the reality is that colleges have to do more than just start requiring students to take a single diversity course.

For example, who should be teaching diversity requirements?

Some schools say they wouldn’t implement a diversity requirement because they don’t want to unfairly burden the faculty of color. There is some truth to their concern. A Penn State University Press study concluded that most “inclusive” courses are taught by women and faculty of color. In fact, it is usually Assistant Professors with temporary positions who are teaching inclusive class content. The researchers stated that “teaching about diversity is disproportionately the purview of groups traditionally marginalized in higher education and those with less power and prestige.” It’s worth asking yourself if that’s true of your college experience.

What does it mean to ask white faculty members to start teaching about racism?

In 2016 a group of students at Hamilton College sent their President a list of demands. They wanted Hamilton to hire more BIPoC faculty and discourage white faculty members from “leading departments about demographics and societies colonized, massacred and enslaved.” Hamilton students bring up an incredibly important point. White faculty are not equipped to be the leaders of anti-racist education, but that doesn’t mean they can opt-out entirely. White faculty have a responsibility to take on the work of anti-racism. Still, they can do so only if they “possess a deeply reflective stance toward understanding how their own particular biases shape their experiences toward interacting and communicating with diverse others” (Penn State University Press).

Classroom environment matters just as much as content. Conversations about racism will be emotionally intense. When white students confront their whiteness for the first time, they are defensive, ashamed, and guilt-ridden. These reactions are common and hurtful to BIPOC students who have understood whiteness their entire lives. Professors can’t teach anti-racist content effectively if their BIPOC students are not safe or able to opt-out of conversations about racism and whiteness. Higher education needs to make sure they aren’t tailoring their diversity courses exclusively for the growth of white students.

Reducing bias is a good thing, but it shouldn’t be the whole point of diversity courses.

One of the risks of having a single “diversity requirement” is that white students will pat themselves on the back if they get a good grade, and self-appoint themselves as anti-racist. As we’ve seen with #BLM activism online, white people crave checklists that they can make their way through to officially declare themselves free of racism. We also know that racism is not something you can shed completely. Multiple studies have proved that students must take more than one “inclusive” course to reduce their biases long term.

Colleges need to focus on educating white students in anti-racism, yes. But the point of diversity courses should be more than that. The fact that we need to create a requirement to teach diversity means the current model is inaccurate and biased. Higher education only considers one set of stories, people, and knowledge to be legitimate enough to teach. They also expect “diverse” groups of people to attend their campuses and internalize the lessons of these one-sided stories. Course descriptions in politics, philosophy, and economics tell us we’ll be learning about the “foundational texts” of these disciplines. They do not consider how these “foundational” thinkers have left most people out. They do not consider that the students with the most layered, intersectional identities feel further and further away from academic legitimacy each time we present a “foundational” text.

More than one way to do it.

Instead of a single diversity course, colleges should change the bedrock of their curriculum. Sylvia Martínez, a statistics professor at a PWI in Indiana, proved that there’s a better way to teach diversity than to require students to put it on their transcripts. She believes that many students have a “pre-existing dislike of diversity.” So instead, she taught a “non-traditional statistics course meeting natural and mathematical distribution credits” (Journal of College Student Development).

The fact that her class met the math distribution requirement meant that students normally resistant to the idea of diversity were eager to take her course. Students felt they could rely on “the numbers.” At the same time, Martínez presented her students with the issues of unequal education, labor exploitation, gender inequality, and more. She noted that her students seemed less defensive (though not less emotional) because they felt they had hard data to fall back on when their biases rose up. Ultimately, they were able to have robust conversations about diversity.

The Cite Black Women Collective focuses on motivating academics “to critically reflect on their everyday practices of citation and start to consciously question how they can incorporate black women into the CORE of their work.” It’s a simple step that faculty can take to diversify their courses in a meaningful way. I stated earlier that white faculty are not equipped to lead anti-racist work. Instead, they should follow the lead of Black, Indigenous, Women of Color who have been doing anti-racist work without acknowledgment or pay since the beginning of time. Higher education has an opportunity to do away with the constant use of “foundational texts.” Instead, colleges could turn to the Black academics who break away from the traditional canon to tell a more complete story.

Citing Black women is one of the ways colleges could genuinely incorporate diversity into their courses. They can get at the core of each of their departments without providing white students with that “diversity” checklist they so desperately like to cling to. If every discipline cited Black academics along with those “foundational texts,” the bias-reducing effects would be far greater than what a single diversity requirement could accomplish.

So are diversity requirements helpful? Yes. And no.

Requirements are helpful in the sense that they force resistant students to examine their biases. However, they only go so far. It’s too easy to think that a diversity requirement could solve every PWIs problem with racism. It’s also too easy to say that we shouldn’t have a diversity requirement because it burdens the faculty of color. The whole story is more complicated. We don’t need one diversity course. We need every course to be diverse. Faculty must go through mandatory anti-racism, anti-bias training. Colleges need to prioritize their BIPOC, queer, students with disabilities, and to reflect this priority through representation in academics.

These aren’t perfect solutions. There’s a case to be made for the idea that higher education can never truly separate itself from its settler-colonial foundations and ties to enslavement. For now, though, higher education is here to stay. As long as it is, the changes above are a way to start unburdening students, faculty, and staff of color from the constant, unpaid, unacknowledged labor of educating their white peers.

Female Doctors Clap Back At A Ruthless Study On Their Bodies

Amalia is pursuing a BA in Gender and Sexuality Studies at Bates College and hoping to go into law sometime after college. She's a dual-citizen of Spain and the US and grew up bilingual. Her favorite Spanish word is "cariño," because it is a homey, term of endearment meaning "affection." She wants to learn about wine from her sommelier father, but unfortunately has a terrible sense of smell and has to stick to faking her way through sophistication.