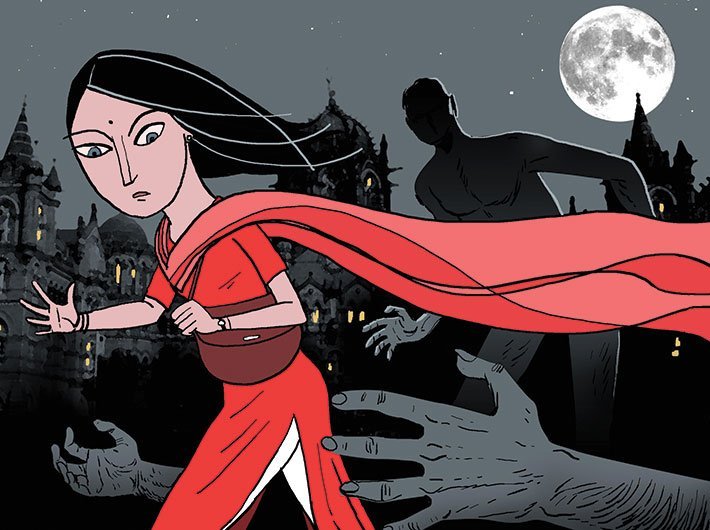 “Hand me my anti-depressants, Zaina,” my aunt whispers with immense struggle, her voice cracking at every syllable. I hand her the pills, briefly making eye contact; her eyes are a storm compounded with fear, eternal sadness and fragments of anger sparking. Her face contradicts her eyes, showcasing the aftermath of a natural disaster; the surface of her skin is rough and prominent with wrinkles of distress, there are also recognizable spots where her tears have dried up and they have been revisited by more tears.

My mother pushes her sister towards her and attempts to soothe her wounds. She still continues to break down, crippling unceasingly. My mom then mutters “Aisha, this happens in every household. You need to strengthen yourself.” Unfortunately, these words of submission were the only Band-Aid that my mother could offer to her sister that was a continuous victim of mental and physical abuse by her in-laws.

A majority of the times when people hear such narratives, they insist that such a case of violence should be reported. If only it was so easy. South Asian marriages are usually a union beyond just a woman and a man, they actively involve both families too. So at the excuse of maintaining their reputation, the family tells the woman to silence herself, endure the pain. Moreover, women are almost always financially dependent on the men so where would they go? How would they survive in a world that seems crueler than their violent household? And if these women report their suffering then what’s the assurance that the law will protect them? The truth is there’s not much safety in escaping either. Just two years ago, a Protection of Women against Violence Bill was passed in 2016 by the Punjab assembly in which Pakistan’s Council of Islamic ideology agreed that a man should be allowed to “lightly beat” his wife. So when bodies linked to the government say there’s nothing wrong with domestic violence, then how can a woman escape her torture? She is trapped in the battlefield, a war that will prolong till her death. Along with the violence, she will become a victim too, she will also silently endure an array of mental health issues.

These mental health issues aren’t simply limited to a woman stuck within a brutal vicious marriage, it expands even further; it touches brown girls enter the workforce, that learn about the limitation imposed upon their life, that are victims of harassment and child abuse. It stretches and envelopes brown girls everywhere, the only solution a lot of the times is to suppress it, because how do we fight it?

Thus, the question of free will rises. To what extent is this free will available to brown women? And what are the consequences of this free will being stripped away from women?

Women are expected to live according to a set timeline which fluctuates depending on which area in Pakistan you live in. Some have higher education as part of this timeline, while some don’t. The fact of the matter is you must get married and devote your life to your in-laws. The wedding in many ways appears as a slave trade for women that are forced into arranged marriages. Once they do get married, everything they do is monitored. Sometimes the restrictions are on ridiculous things like visiting your parents. You’re caged.

Such restrictions imposed on a woman’s life have detrimental consequences on a woman’s mental health. A report found that women face “higher lifetime rates of depression” when they are exposed to the differences in social roles (Wilhelm & Parker, 1994; Wilhelm et al, 1997). With such a precedent set, women don’t have access to care because of the large mental health stigma within Pakistan (as with rest of South Asia).

A woman’s autonomy shouldn’t be in the hands of a man or her in-laws. She shouldn’t have to rely on pills or fragile words of comfort in which she must “strengthen herself.” Cooperating with one another and dictating a woman’s life are extremely independent ideas which should be recognized and advocated within our societies.

How Skinny Shaming And Fat Shaming Are Fundamentally Different

Why You Should Stop Congratulating People On Their Weight Loss

A 17-year-old high school student that spends most of her time drinking tea and reading political philosophy.