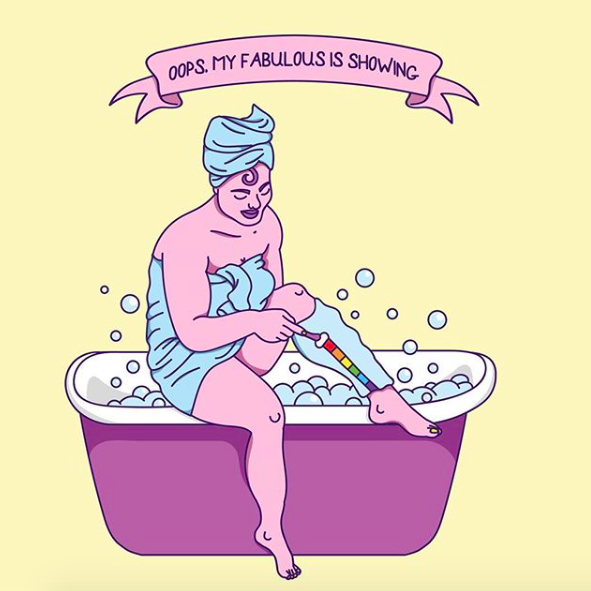 I am (almost) a grown woman, and I make my own decisions. I am a feminist and I am aware of the patriarchal society that we all live under. I also shave my legs, underarms, and vagina on the regular, and this makes me feel uncomfortable.

When I was 7, I tried to put on Disney Channel to get to sleep when I was sick, the number on the remote for it was 609. I accidentally pressed 909 and accidentally went on the XXX-rated channels that show full frontal nudity after 10 pm.

When I was 11 and I realised I had grown pubic hair, I felt a moment of happiness and then a plethora of shame. I snuck a razor into my room and clumsily shaved it all off. I did this because it’s what I’d seen on that channel 4 years ago and I figured that’s what pretty women looked like.

I didn’t realise that this was patriarchal pressure at 11 years old. But when I was 14 and I started to learn about feminism, I started to unlearn all of the harmful expectations that were being thrust upon my adolescent self.

After this realisation, I started to push myself to see how indoctrinated I had become by sexism and the expectations of women. I didn’t shave my underarms for two years when I was 15 but caved when I moved schools and felt like I would be judged by my new peers. I told myself that I didn’t care about shaving my legs, but out came the razor every time the sun came out.

I realised that I was the hypocrite; the feminist that could rant for hours about why the idea that western women should shave their body hair is redundant, but couldn’t put on a pair of shorts without slathering herself in shaving cream.

Are we bad feminists for giving into the expectations that we know are ridiculous? Maybe. But probably not.

In a western, capitalist society, we are conditioned to hate our natural born selves because hatred is profitable. Unfortunately, discovering feminist theory doesn’t immediately (or even slowly) undo years of learned self-hatred and oppression. (No, I’m not about to have the argument that women in western society aren’t oppressed.)

It’s important to remember that it’s okay to still adhere to some of the ridiculous expectations implemented upon us, as long as we know that they’re ridiculous. Learning that something isn’t true doesn’t act as an immediate remedy when you’ve been taught it your entire life.

For example, it’s a myth that it’s dangerous to use your phone at a petrol station. But whenever I’m parked up, I still hesitate before checking my messages in case I blow the place up. Of course, I hesitate – the place is littered with signs with giant crosses through a picture of a phone. Or are they? They were ten years ago, and that’s what I remember when I think about using my phone at a petrol station. My point is, even when you know something to be false, even if you learned it a decade ago, it’s difficult to let go of the initial thought.

Like everything, it’s a slow process. Maybe I do still feel more comfortable when my vagina is bare, but I can also go several weeks without shaving if I want to, just to prove to myself that I can do it. I can go outside on a hot day with stubble on my legs without having a breakdown. I can go to the weights area in the gym without shaving my underarms and not feel intimidated when the dude-bros notice my straggly hairs. For a woman who once sandpapered her legs as a teenager because she thought it would be a good hair-removal technique, I think that’s pretty neat and I’ll take those wins.

Are We Truly Against Sexual Predators?

The Colour Of My Skin: A Burden And A Blessing