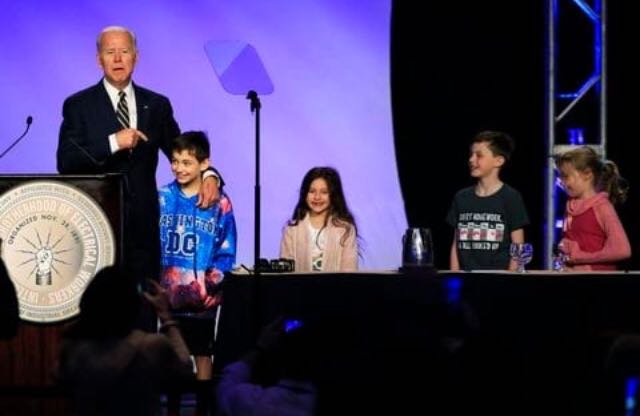 Above picture: Joe Biden “jokes” about having permission to touch the child pictured after multiple women have called him out for making them feel uncomfortable. Joe Biden has consistently touched women and children inappropriately without their consent, this media can be easily searched for on the web. Photo Credit: Manuel Balce Caneta/AP

*Content Warning: This article discusses Joe Biden’s unfolding acts of misconduct towards women and children and mention of sexual assault.

Many young people in the United States know of Joe Biden as former president Barack Obama’s vice-president. Unfortunately, he is much more than that. As Joe Biden begins his run to be chosen as the Democratic candidate in the 2020 election, it is crucial to discourage him. After all, he wasn’t even in the running until multiple outlets reported polls indicating people choosing him over other candidates despite him not officially declaring his campaign (thanks so much for that!). Thus, a wave of news in support of Joe Biden as well as news criticizing him has overwhelmed the public in the United States. There are criticisms that follow his career which are important to note as one considers him as a candidate. These criticisms and his own repeated actions of touching women and children inappropriately are more than enough to exclude him from running as the Democratic candidate. There are multiple pictures and videos of him touching women and children inappropriately, who appear to be incredibly uncomfortable and cringe away from Biden who consistently gets closer and holds them tighter. Some feel that Biden should be forgiven and elected because he has expressed some regret publicly, however, his apology was not to the women who spoke out, it was to the threat towards his potential election.

This past year, many watched as Christine Blasey Ford bravely spoke about her assault accusation against Brett Kavanaugh in an attempt to stop him from joining the Supreme Court. Kavanaugh, who sputtered angry retorts to deny the allegations, was still given the position because we live under the patriarchy. The president of course, who has been accused of sexual harassment and assault himself, ranted in defense of Kavanaugh. Yet a louder outcry called attention to the similarities between this infringement of justice and another when Anita Hill accused Clarence Thomas of sexual harassment in 1991. There are common painful themes in how the United States treated these women and they both dealt with the excessive public harassment in a regal way. Joe Biden was the Judiciary Committee Chair and was a key component in turning away Anita Hill and witnesses to her statements. His supposed regret for how the situation ended has increased over the years as calls for him to do so have increased. After announcing his presidency, he expressed his regret to Anita Hill over the phone. Understandably, she stated, “I will be satisfied when I know there is real change and real accountability and real purpose.”

What is more, despite Biden’s claim to being against white supremacy in his emerging campaign, he has only stoked the flame his entire political career. He pushed for mass incarceration, voted against gay marriage, pushed crime bills that increased police presence and building of new prisons, voted for the Patriot Act and Iraq War, pushed harsh anti-drug laws that did not apply to his own children’s drug use, supported laws to limit protections for students and much more. Last year Biden presented George W. Bush with the Liberty Medal. In the past few months, one can note that Biden was silent when Ilhan Omar was being publicly berated and threatened, yet now claims he is progressive and against what is most hurting the United States, its own white supremacy and patriarchy. He said before that he “doesn’t care why someone is a malefactor in society” so do not believe him when he says he cares now. Indeed, for the young people who fondly remember Biden as being associated with Obama, they should know he does not care for you or your problems. In his own words, “The younger generation now tells me how tough things are — give me a break…I have no empathy for it.” All of the communities that Biden has no empathy for deserve representation and compassion in today’s politics.

If this history of Biden hasn’t been disturbing enough, Biden’s inappropriate behavior with women and children should exclude him from being a democratic candidate if the democratic party is going to seriously claim they are a better option than Trump. After being confronted by his inappropriate behavior, Biden has responded in a collection of excuses that sort of own up to his actions without actually owning up to them or responding with appropriate sincerity. Even Trump, who has not only set a low bar for the treatment of people but has had his own accusations of sexual misconduct and inappropriate behavior towards teenagers has made fun of Biden’s unwanted touching, demonstrating how this topic is not being taken seriously enough by people elected to positions of power. Biden is already laughing about these accusations, recently he grabbed children pulling them closer to him at public events saying that they gave him permission to touch him, with no visible sign of that being true.

In response to Biden’s obvious lack of remorse, Lucy Flores, one of the women who spoke out against Biden’s inappropriate behavior replied in a tweet: “It’s clear @JoeBiden hasn’t reflected at all on how his inappropriate and unsolicited touching made women feel uncomfortable. To make light of something as serious as consent degrades the conversation women everywhere are courageously trying to have.”

Biden has demonstrated how little he cares about the subject and though he promised the women who came forward that he would be more mindful in the #MeToo era, all he has done is make “jokes” that aren’t funny.

In the past couple of years, we have protested men being elected who have been accused of assault as we should. Yet people are gladly praising a man who flaunts his predatory behavior on camera and refused to believe a woman speaking out about harassment, later admitting her case was handled unfairly for the sake of his own public image. More and more women are coming forward to demand accountability of Biden, who has been hurting people in clear sight. Time and time again, Biden has visibly made others feel uncomfortable on camera and continued as they pulled away. His “apologies” are not only deeply concerning, but unacceptable. If we truly mean it when we claim to protect women and children in society, why are we condoning behavior that silences their autonomy over their bodies? People who have defended Biden claim that no one is perfect, as if that is what we are expecting. People leaning towards Biden are clinging to the familiar and frankly, sexism and racism. Leta Hong Fincher referenced this in a tweet: “CNN just said Biden is establishing himself as the ‘the grown-up in the race.’ How insulting for the fabulous women and people of color who are also running.”

To those on the edge, listen to his 1993 speech on the infamous Crime Bill, or look up the numerous pictures and videos of him touching women and children inappropriately. If they don’t make you uncomfortable, you are on the wrong side of history. The Democratic Party is far from perfect, but women and children deserve better than to look up to another creep in the presidential office. We all deserve better than having to choose between two predators in the next election.

Walgreens Wants the Worst For You: How Walgreens Threatens Our Autonomy

Check Up On Your Friends