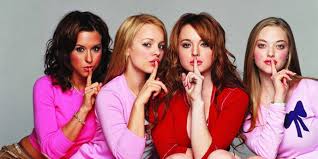 Been there. Done that.

As much as I regret it now, I have hated my friends before. I’m sure I’m not alone in this. So, you’re not alone either.

One cannot feel guilty for making a mistake when she doesn’t know any better. It’s only wrong when you have realized it, and you keep doing it. So no, you’re not mean, or a bad friend, or a bad person. You’re what you have been taught. And in this society, you’re taught to hate every other girl. You’re taught to see them as competitors.

You may not have realized this just yet, but think about how many times you’ve heard a girl saying: “I only hang out with guys, there’s less drama.” Probably thousands. Probably you’ve said so yourself. This is okay. Maybe it’s true that you get along better with guys, and there’s not a problem with that. It’s obvious we don’t have to like everyone, but it just seems quite doubtful that you can’t get along with half of the world’s population.

There’s “drama” between girls. Okay. But sometimes you go a step further and, as a woman, you make statements such as “Girls are just mean,” “Females are bad people,” etc. Wow. Like how in the world would you make this generalization? Are you considering yourself mean basing you just in your gender?

Maybe you never thought about this, but I’m sure you know what I’m talking about. Things happen for a reason. They’re not just made up. If we as females don’t like other females or we consider them mean, it’s because we are forced to.

Girls put other girls down in order to get approval from other people. Generally, almost always, the approval from guys. The pressure we suffer from having to have perfect bodies and a perfect, smart, but submissive personality leads us to bash other women basing us on their life choices.

We are taught to speak awfully about girls who choose to wear revealing clothes or choose to have sexual relationships with guys. We are taught to hate our bodies because they don’t look like the ones we see on Victoria’s Secret runway, but we also criticize every other girl that doesn’t take care of their own body. “I’m fat, but she’s fatter!”

It’s easy to see that guys don’t tear other guys down as easily as women do. We need to build sorority between females, try and help other girls, and respect their choices. We should not let society convince us that it’s okay to speak badly about other females basing us on standards that aren’t made by us.

Think about “Mean Girls.” It may be a silly movie, but I haven’t yet found another one that reflects female relationships in high school in a better way. After Regina, Cady and company spend the whole year bashing and bullying each other, the teachers decide to get all the girls together in the gym. Once they’re all there, Mrs. Norbury asks them to close their eyes and answer how many of them have had another girl say something bad about them behind their back. After each and every one of them raises her hand, she tells them that whenever they’re calling another girl a slut, they’re giving guys the right to do so. Girls should help each other, not tear each other down.

It’s about time we realize no one is gonna help us free ourselves if we don’t do so. And in order to conquer our rights and the freedom males do have, we need to work together towards that goal. Every time you find yourself criticizing a girl, think if her behavior would be censorable if she was a guy. Try to become friends with girls. I promise you not all of us are “drama” and “mean.” Never fight a sister for a guy, respect other girl’s choices, and empower your girlfriends. Maybe someone’s prettier, skinnier, or funnier, but you’re perfect in your own way and deserve peace and happiness.

Love and empower your sister, ladies! Citing another High School movie: We are all in this together!

An Open Letter To My Mom