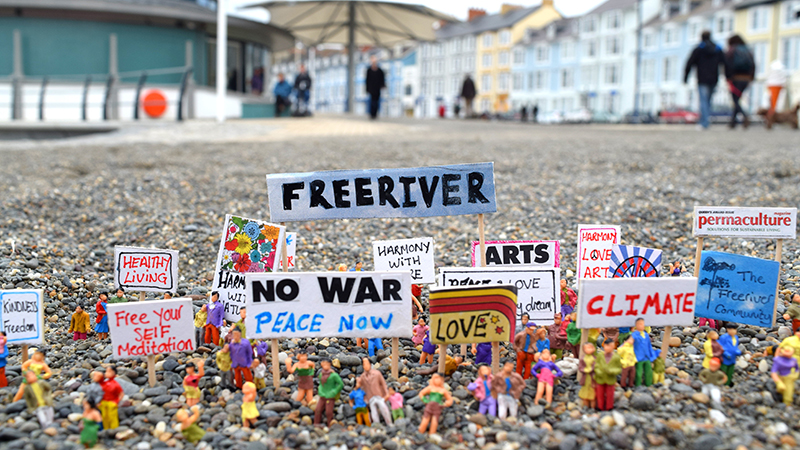 A perpetual narrative of powerlessness is sold to us on a daily basis. As complex political options are reduced and polarised (think Brexit and the ‘choice’ between ‘no deal’ or ‘bad deal’, for example), democratic processes leave large swathes of the population wanting. Switching on the television or opening a newspaper frequently serves as an unwelcome reminder that there isn’t enough money, enough time, or enough resources, and reaffirms that our world is plagued with multiple forms of injustice which, as individuals, we can do little to impact. In its broadest sense, ‘inequality’ could justifiably be nominated the political and social zeitgeist for our time. Anyone could be forgiven for falling prey to a paralyzing sense of etiolated impotence.

Faced as we are with an endless list of seemingly insurmountable iniquities, apathy could become an appealing and easily-accessible place of refuge from our own seeming lack of agency. The question we should be asking ourselves is this: how can we find empowerment in situations which leave us feeling powerless?

‘How wonderful it is that nobody needs to wait a single moment
before starting to improve the world.‘

Second-wave feminist Carol Hanish was on point when she stated that the personal is political. Activism can be a deeply personal engagement and can mean different things depending on who you ask. Generally, people who define themselves as ‘activists’ focus on a specific cause or issue and take action to facilitate change. These issues can range from the smaller-scale, local or community activism (for example, rallying a group to address a local community issue) to taking on entire political systems or processes. From local change to climate change; from school funding to NHS funding; from animal rights to human rights, no issue is too small and no challenge too large to engage with as an activist.

As with all things, subjectivity still has a role within activism, and some actions which one person may classify in this way, others may not think of in the same terms. Involvement in protest, affiliation with a political or social cause, demonstrations, strikes, sit-ins, causing disruption to day-to-day routines, and lobbying decision-makers at a high level are all common and overt forms of activism. Other, perhaps more subtle approaches (although not an exhaustive list) include speaking out about injustice or wrong-doing, shining a light on personal experiences of injustice or inequality, petitioning, volunteering, getting involved in local groups and organisations, craftivism, or campaigning using social media.

Of course, there is no formal level of expertise in activism, no expectation to live up to unless it is your own. It will always feel like there are other people out there who do more than you alone could ever possibly hope to do. Imposter syndrome is real, especially when you start questioning whether your own personal actions really make a difference, or if you have done, or could ever do, enough. Did signing that petition actually *change* anything? Does showing up to the rally or protest make an iota of difference? Is my contribution as meaningful or important or genuine as someone else’s?

Such thought processes combine to create a nexus of apathetic self-sabotage, especially when these thoughts become compounded by other people’s negativity. Accusations of virtue-signaling (an accusation leveled to imply that someone is only writing, saying, or doing something to highlight their own virtuousness), of being termed a ‘keyboard warrior,’ or suffering earnest reminders that none of your actions make an immediate difference at a high level can be supremely disheartening.

‘When we speak we are afraid our words will not be heard or welcomed. But when we are silent, we are still afraid. So it is better to speak.’

The truth is that the vast majority of people engaging in the issues that they care deeply about are prone to feel that they could and should be doing more, even when they are giving their all. Coming to terms with imposter syndrome and the systematic self-devaluation of our own contributions to enacting change is a process of self-actualisation and personal empowerment. Silence and inaction are not going to change anything and can only ever maintain the status quo; there is little then to lose if you want to bring about change. You – and what you have to offer to enact change, as just one person among many – are enough.

The most important facet of activism is participation. It’s about putting your boots on the ground for the things you care about. It’s also about being willing to create and facilitate an open, frank and respectful dialogue, and to contribute to this using meaningful actions, no matter how small these seem. Much of our activism is so difficult to measure and to see the difference it makes; sometimes tangible changes won’t manifest themselves for months, years, or in some instances even decades. Even if instances of activism and protest don’t enact immediate change, activism is still a facet of democracy and an important means of drawing out public debate and counter-discourses to challenge the status quo.

‘You may encounter many defeats, but you must not be defeated.‘

An often unanticipated outcome of participation in activism is the sense of connection found with other people, as well as with the heritage of activism in general. Coming together whether in protest or in a lobbying capacity, as a group with similar interests or passions or via an online collective can unite strangers in unprecedented ways. Surrounded by countless others at a protest march, for example, we are more than likely to encounter like-minded people with similar views to our own, while humorous, poignant, or cleverly-crafted banners and protest signs are a unifying focal point for comment and conversation starters. The warm sense of solidarity and the strength of collective belief in a shared goal or outcome is usually palpable.

Another surprising and probably unintended effect of sharing our enthusiasm and talking about our efforts to enact change is that other people may begin to feel compelled to engage with causes and issues they too feel strongly about. Suffragist leader and social campaigner Millicent Fawcett famously posits that ‘Courage calls to Courage everywhere’; truer words were never spoken. It is perhaps in these small changes of perception or behaviour from those around us that we see most directly the fruits of our own activism.

Ultimately we have to establish a personal balance to be able to engage and bring about positive change and to do this it’s vital to practice self-care. In a world packed full of injustice, various issues we care about, it’s not possible to do it all. Picking battles and being mindful, and taking time to reflect on the value of our efforts and expending energy on the things we care about in the name of positive change and personal and social empowerment is an important facet of personal activism, not least because this process can help prohibit burnout.

For the happily uninitiated, burnout is a state of emotional, physical, and mental exhaustion caused by excessive and prolonged stress; we’re especially prone to it when we take on too much or expend energy without making time to prioritise our emotional and physical needs. Burnout can result in feeling overwhelmed, emotionally drained, disenfranchised or disheartened, and makes us less effective when we do engage in activism. Unaddressed, it can significantly impact our ability to function day-to-day as well.

‘Caring for myself is not self-indulgence, it is self-preservation, and that is an act of political warfare.‘

Practicing self-care – checking in with yourself and your well-being, taking stock of the value of what you have already contributed, and taking a break from activism, political engagement, or social media when you need to – is a feminist act. You can’t pour from an empty watering-can: being mindful of your own well-being as an activist will make your efforts more sustainable in the long run.

Progress and change are always going to be an ongoing process; if you want to feel empowered about issues which trouble you, whatever they may be, get involved and remember to celebrate your contributions and small wins when they manifest. Whatever your activism looks like, however small or insignificant your actions seem, do it in the knowledge that you may be one person, but the very fact of your participation is of great significance.

Should We Hold Feminist Media To A Higher Standard?

Feminist activist campaigner, PHD, and bibliophile. Volunteer Coordinator for Oxford Pride 2020 and also leading the #IVFFairness campaign to End the IVF Postcode Lottery on the NHS.