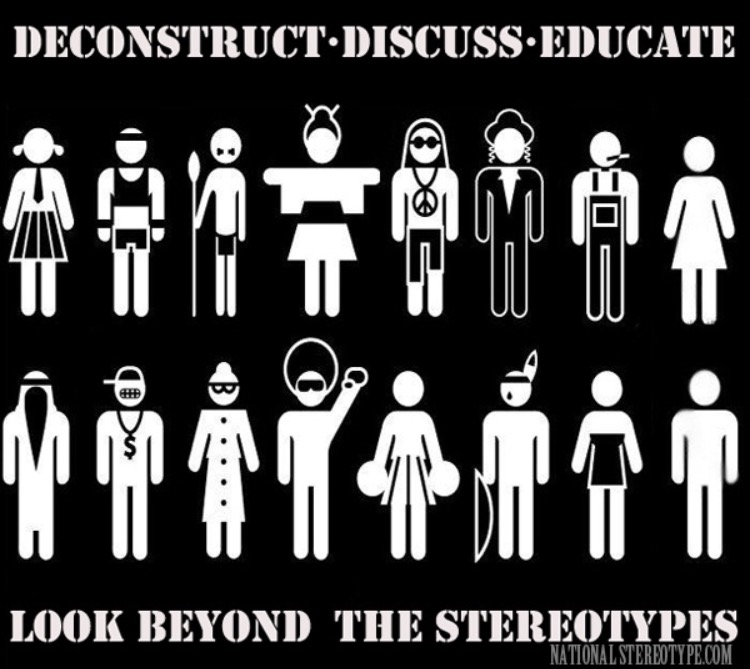 The definition of a stereotype is “a widely held but fixed and oversimplified image or idea of a particular type of person or thing,” but we all know that stereotypes are so much more than that. Stereotypes degrade, defame, humiliate, and break down their victims by attacking the core of their being, whether it be race, gender, sexuality, etc. And the worst thing about a stereotype is that you can never escape them or change the fact that you’re a part of it, or so I thought many years ago.

I first encountered stereotypes at a very young age, when a little boy told me I “ran like a girl.” I asked what it meant to do things “like a girl,” and he informed me that it meant that I didn’t perform as good as everyone else. Little did I know this stereotype would follow me for years to come.

I asked my parents about doing things “like a girl” that night because of my distaste of the comment, and thus I was introduced to stereotypes. I went through many years of school after that and encountered more stereotypes (most of them being untrue).

They made me feel like I wasn’t normal, or that something was wrong with me. I eventually came to the realization that I couldn’t let some stupid assumptions get the best of me, and that instead I would use them to make me stronger, and that’s exactly what I did.

This is a list of my personal stereotypes and their stories of how they made me stronger (PS: most of these are based on the fact that I’m a woman, but putting one section over being a woman would drag on so I have split up the most prevalent ones about being female into different sections.)

VIDEO GAMES
I have been an avid gamer since I was about five years old, when I got my first GameBoy. My dad was extremely encouraging of me playing games like Mario Kart and Super Smash Bros. with him, and he didn’t think anything of the fact that I was a girl playing video games. I thought nothing of it, as I had never heard anything different, and nobody told me that it was “only for boys.” I had been going to public school for years and had never had many close boy friends. One day, I heard a boy talking about Mario Brothers and was intrigued, as I loved many Mario games and I wanted to join his conversation. When I attempted to try and talk to him about secrets and fun things I knew about the games, he scoffed at me and told me, “What? Girls don’t play video games. You probably just looked that up on the internet so you could impress me.”

I was so confused. Girls don’t play video games? I tried to brush off the comment and went along with my day, constantly wondering, “Why should I not be able to do something just because I’m a girl?” This thought ran through my mind for years, as I would always be teased, even by girls, because I liked to play video games and do “boy stuff.” But I never stopped playing video games, even though it was the cause of my occasional schoolyard misery, because I loved it and what they did for me.

My dad is a shy guy, and I didn’t get to see him often when he split up with my mom, so the main way we would bond is by playing video games together. I wouldn’t give that up for anything, my love for him was too strong. Eventually middle school came around, and I found my voice, and wasn’t so nervous about sharing my passion for video games with other people, because most of the guys I had been with in elementary school grew up and realized it wasn’t okay to make fun of me because of the way I was “supposed” to be. Some apologized, some didn’t. But I still didn’t care. I didn’t want their apologies, I wanted their acceptance, and their support. And now, being in high school and being in the phase of the world where it’s “cool” to be a gamer girl, it has taught me something incredibly valuable, and I learned it very long ago without even realizing it. It is that you shouldn’t stop doing something just because other people aren’t doing it or don’t think it’s “cool,” because that something is unique to you. In my case, video games were (and still are) unique to me, and even when people made fun of me, I didn’t stop playing them. My video game stereotype made me socially independent and unique, and I could not be more grateful.

CLOTHES
When I was a very little girl, I loved the color pink and loved wearing dresses all the time. When I got to public elementary school, I still held this love dear, for the most part. I started noticing around 3rd grade that all the boys would wear shorts and a t-shirt, and all the girls would wear dresses, like it was some secret dress code that everyone followed. At that time, I was also very tired of being teased about liking video games, and one day I just stopped wearing dresses. My favorite color suddenly became blue, and I looked in the boys’ section at the store for clothes. I realized that the stereotype that the kids in my school were complying by everyday was completely unreasonable and I didn’t want to follow it anymore. I went to school the next day, and the absolutely amazing thing is is that no one made fun of me or judged me at all. I was beyond shocked considering how often I was told I wasn’t allowed to play video games BECAUSE I WAS A GIRL. It absolutely boggled my mind. Nobody ever said anything (at least not to my face) about how I dressed differently from all of the girls in my grade. And then when my “emo phase” rolled around in middle school (you know, the land of rude rumors), nobody said anything either.

Why was I made fun of for video games, but not for my clothes? Thinking about that question to this day still confuses me. But I do know one thing about my whole “drastic wardrobe change” fiasco. Not being made fun of for doing something no one else had done gave me extreme confidence, and considering I’m a decently shy girl around most people, that is one of the best things I could have. My newfound confidence caused me to open up to more people and make more friends, and eventually near the end of elementary school I was popular. So many people knew my name and wanted to play with me, and it made me so happy.

Who knew that wanting to be different and gaining confidence could change me so drastically? I took that confidence all the way through middle school and eventually joined theatre, one of my extreme passions that I still hold dear today. The “clothes stereotypes” surrounding girls made me stronger by giving me confidence and personality that I never knew I had in me.

THE “GAY” HAIR
All throughout elementary school, besides some minor periods in summer, I had long hair. I loved having long hair because I thought it made me more ladylike and beautiful. I had to get haircuts decently often, because my hair grows like wildfire, but I still loved having long hair, even though it was a pain to deal with.

Eventually in eighth grade, I decided my hair needed to change. I had gone through puberty, which had made my hair more naturally wavy, and thus much more difficult to deal with in the mornings. I already had to wake up early so my mom could get to work every morning, but now I had to straight iron all of my hair every. Single. Morning. Needless to say, I got tired of it. I had wanted to try a new hairstyle for a while, and when I saw celebrities such as Miley Cyrus and Jennifer Lawrence get their hair cut short, I fell in love and knew this was the hairstyle I needed. So, I went to a salon and got a pixie cut, with a little bit of my own personal twist as well. As soon as I posted pictures of it on my Instagram, I got a few personal messages from people I barely knew asking if I was gay.

Now, at that time in middle school, everyone was a little bit confused about their sexuality. I was a little confused, but at the time I wasn’t really attracted to boys or girls, as I was very stressed (I got sick from all the stress, so love was the least of my worries) from school and other things. I didn’t really have time or need to think about my sexuality.

I responded with, “Why would you think I was gay? I got my hair cut, that’s all.” and received, “Idk it’s just that you got your hair short so maybe you’re coming out? But i guess not.” I immediately recognized that this person was stereotyping me in the rudest way possible.

Even if I was gay at the time, I wouldn’t want to come out based on a haircut, and I definitely wouldn’t want people assuming it. I was disgusted that even though the world had gotten so far in acceptance of gays, there were still people so idiotic to stereotype based on physical attributes. I pledged from then on to actively support gay rights and to do whatever I could to support the community surrounding it. To this day, I still love going to pride, the place where no one cares if you have a “gay” haircut or not. Being stereotyped as gay based on my haircut made me a stronger person by driving me to help others, something that I never knew I loved to do.

It’s very rare to see stereotypes, the thing I described as degrading and humiliating, make a person happy or drive a person to do the things I did. My stereotypes pushed me to fight back, to not accept that this was who I was supposed to be. And I hope by sharing my stories with you that you are now motivated to fight back, to say, “You know what, stereotypes? You can’t control me. I am me and you could never possibly understand me,” or atleast something like that.

Don’t let your stereotypes define who you are, because you might just gain something great out of it.

Maddie Loy
Maddie Loy is a 15 year old student at Garland High School, where she enjoys theatre and varsity drill team. She recently got into writing because she was, and still is, inspired by her English teacher, Mr. Segura. In just one school year he turned her from a complete train wreck of a writer to one of the best in his class (with his help of course), and she can't thank him enough for that. A feminist, a Netflix-binger, and just an overall wacky teenager, Maddie loves to share her ideas and experiences with the world. She hopes that Women's Republic will help her writing skills and make new friends from all around the globe. And of course, she loves all of the WR fans reading her articles!