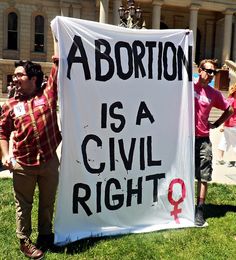 The “pro-life” attack on abortion has made its worst move yet. In several states across America, abortion has been restricted, and in Alabama, there is an almost absolute ban on it- even for rape or incest (the latter of which is surprising, considering it’s Alabama). Jokes aside, the recent legislation passed regarding abortion is horrifying and perilous for women and those with the ability to get pregnant.

Indiana passed an almost total ban on second-trimester abortion back in April. Then Ohio placed a ban on abortion after a fetal heartbeat is present. In Georgia, the governor signed a six-week abortion ban. Utah banned abortion after the pregnancy has reached eighteen weeks. In Alabama, the governor, a woman, signed a bill that completely banned abortion, no exceptions. Missouri and Louisiana are moving to pass bans like Ohio’s as well. All of these states are disgustingly challenging the Supreme court case Roe v. Wade.

The new restrictive laws against abortion are outrageous; they are indisputably violations of human rights and bodily autonomy. Even known conservatives such as Pat Robertson and Tomi Lahren have said that these abortion bans are going “too far” and are “too restrictive.” Making abortion illegal will just end safe abortions, and pregnant women will be forced to undergo methods of terminating a pregnancy that would put their life in serious danger. These bills strip women of the right to control their own bodies. And in the case of Alamaba, it is even more abhorrent that a woman who is raped and becomes pregnant would be forced to give birth to her rapist’s baby. That woman would be more likely to face prison time for getting an abortion than her rapist would for raping her, which just illustrates how absolutely messed up this nation’s justice system is.

It is even more terrifying that a woman would be dubbed a felon for getting an abortion- which would, in turn, prevent her from voting. It is almost like women are being pushed back to the 1900s before they were enfranchised.

Cis male politicians are making laws that will not affect them, laws that serve only to control women’s bodies. Bodily autonomy is a basic, integral factor of Constitutional rights. Our country will not even allow organs to be taken from dead people to give to those in need because of bodily autonomy rights, so how is it that legislation could prevent a living, breathing woman from doing something that concerns her body? If these male politicians really despised abortion to that extent, then they should require men to get vasectomies- but wouldn’t that be a violation of men’s bodily rights? Truly it is about controlling women.

The main argument against abortion is that it is “murder”- ending a human life. And the pro-lifers use the “heartbeat” of a fetus as an attempt to incite emotion. However, life does not begin at contraception- nor at a heartbeat. It is legal to terminate the life of a person that is pronounced brain dead yet still has a heartbeat because that person is essentially not alive- no cognitive function and whatnot- so it is clear that a heartbeat does not necessarily mean life.

And even if life did begin at contraception (which it doesn’t), the “pro-life” argument would still lack credibility because “pro-lifers” only care about life when it involves abortion and not when it concerns anything else. If the pro-lifers truly had life as their main interest, then pro-lifers would also be putting in tremendous effort in advocating for universal healthcare, vaccinations, solving the Flint water crisis (people in Flint, Michigan still don’t have access to clean water), shrinking the military, fixing climate change, education reform (America ranks only 50th in public education worldwide), gun control (a myriad of people are killed from mass shootings, especially children in school shootings, and it is insane and tragic that abortion is being banned faster than guns are), abolishing the death penalty, accepting refugees/immigrants, and helping impoverished and disadvantaged children.

These pro-lifers would also be rigidly against the caging of children at the border and the unjust murder of black people by racist police officers. However, pro-lifers seem to be strangely silent about a majority of, if not all of, these issues, which proves that it is not about life or the children. It is about control. They are trying to control women’s bodies and strip women of their rights.

If there was ever a time for a riot, it is now. All of America cannot risk being apathetic to this. Abortion needs to remain legal.