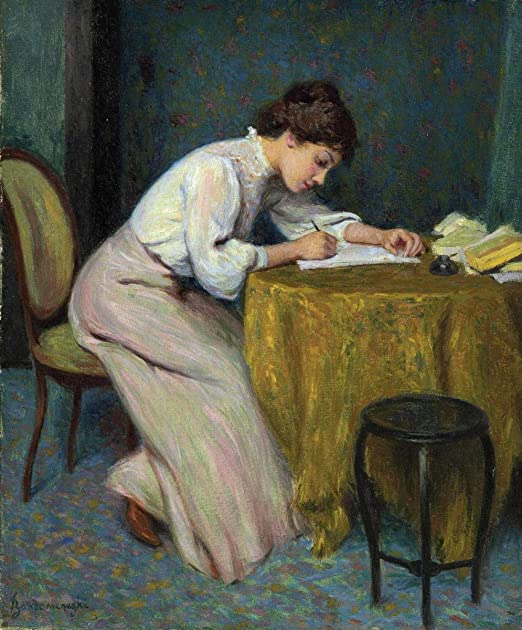 When quarantine started this past spring, one of my close friends suggested we start sending letters to each other. At first, I thought, “Can’t we text? Phone call? Video chat? Who sends letters anymore?” But then I thought: why not, my 3rd-grade self always wanted a pen pal.

Despite my initial indifference to writing and receiving letters, I actually found this process to be one of my few sources of joy in these confusing times. The novelty of taking a break from my phone or laptop to sit down at my desk and handwrite a letter is something I genuinely look forward to. Not to mention the excitement I feel when I receive a new one in the mailbox. As I reflected on this little piece of my quarantine, I considered the significance of letter writing for women throughout history as a way to connect with one another and make sense of the world around them.

Letters have not always been considered private documents between friends and family. Historically, letters were statements by officials in politics, business, or academics for the public’s consumption. These kinds of formal business letters do not inspire the aesthetic and nostalgia of writing letters I experienced in quarantine. We long for the everyday emotional letters between friends or family about drama and love. Women invented this letter. It was in the mid-1700s that we began seeing this shift in purpose for writing letters. It was a woman’s job to manage relations between loved ones. Letters became the tool women would use to stay in touch with one another, and consequentially, stay in touch with themselves.

An observer in our own lives

As women started writing letters, it became a debate on whether they should be considered private messages, or open to an audience. Husbands and fathers felt that they had ownership over a woman’s writing. For instance, Sarah Pennington’s only means of contacting her daughters was through public letters addressed to them. She wrote “An Unfortunate Mother’s Advice to Her Absent Daughters,” a collection of letters with advice on specifically feminine topics of the time (marriage, dress, needle-work, etc).

Sarah Pennington’s book is an example of the public’s interest in the female experience. Women were “observers in their own lives,” and, not concerned with business and politics, they would write about the subtle beauties of everyday domestic life. It was not socially acceptable for them to formally address the public. So, letter writing became a way for women to write “in private,” but others got to read it. It was a part of the slow transition to women having intellectual property. This idea is portrayed well in Virginia Woolf’s “A Room of One’s Own,” where she dissects the factors that play into a woman’s lack of ability to write as a career. This is explained more specifically in Simone Dominique’s article, which analyzes the text.

After seeing the literary success of some female letter writers, private letters from women were being sought out for publication. This influx defined the Epistolary genre. Men, such as Samuel Richardson, even began crafting novels using letter writing from the perspective of female characters. On top of this, many of the well-known female authors that we admire to this day began with the epistolary genre. For example, Jane Austen, the author of “Pride and Prejudice,” started her writing career by publishing letters.

The next time I sit down to write a letter, I will remember the many women that came before me, and their quest for self-discovery and intellectual curiosity. I hope this inspires many women to start letter-writing themselves, as we all deserve to have such a platform to reflect and express our truth. Not to mention, the United States Postal Service is at risk of being defunded and privatized, and every stamp bought and letter sent helps keep it afloat in these unprecedented times. For more information, visit this article.

‘the Pen is almost the only Means a very modest and diffident Lady (who in Company will not attempt to glare) has to shew herself, and that she has a Mind. … her Closet her Paradise … there she can distinguish Her Self: By this means she can assert and vindicate her Claim to Sense and Meaning.’

Self-Care And Its Components