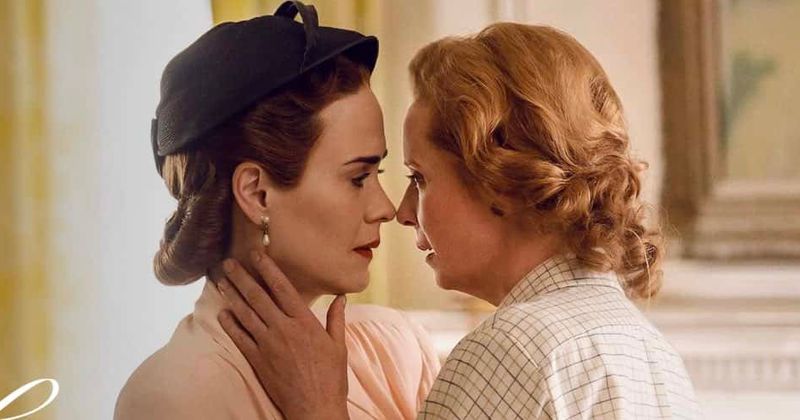 Netflix released Ratched on September 18, 2020. Since then, viewers have been buzzing about two specific characters; Mildred Ratched (Sarah Paulson) and Gwendolyn Briggs (Cynthia Nixon). However, if you haven’t watched Ratched, stop reading! Head over to Netflix immediately! You won’t regret it.

Why does Ratched sound familiar?

Ratched is the origin story for the intimidating, terrifying, and sadistic Nurse Ratched from Ken Kesey’s One Flew Over the Cuckoo’s Nest. While many viewers of the film version know how Mildred used her voice, and power, as a weapon against the patients in a mental institution, viewers did not see where it all began.

What made this strong female the ultimate villain?

So, essentially, Ratched explores the beginning of Nurse Ratched and her reign in mental institutions. It takes place in Northern California during the 1940s. But, this isn’t the most important element of Ryan Murphy’s series.

The most important elements of this series are the intimate relationship between Mildred and Gwendolyn, the actors who portray these women, and what this means for LGBTQ+ representation.

Mildred and Gwendolyn first meet at Lucia State Hospital. Nurse Ratched skillfully, and quite deviously, obtains a job at this psychiatric hospital. As a new hire, she quickly ponders and performs acts that get her noticed by Dr. Richard Hanover (Jon Jon Briones).

Perhaps Mildred will thrive at this hospital?

Gwendolyn is Governor Willburn’s press secretary and campaign manager. Both the governor and Gwendolyn arrive at the hospital to discuss the efforts of Dr. Hanover and Lucia State Hospital.

Dr. Hanover has begun bold experiments on the human mind. He also has desires for reform. Therefore, his beliefs, efforts, and the institution itself could help the governor’s reelection.

Mildred becomes noticed by all three individuals, Dr. Hanover, Governor Willburn, and Gwendolyn Briggs. But, with moments of deep eye contact, there is something more present with Mildred and Gwendolyn.

Intimacy between Mildred and Gwendolyn

While Mildred Ratched is not secure or confident in her sexuality, Gwendolyn is. She boldly asks Mildred to accompany her on an adventure. Their destination is an oyster restaurant.

Aside from lingering eye contact, the restaurant is where their intimacy begins. Gwendolyn feeds Mildred oysters. This action mirrors true, vulnerable intimacy—an intimacy present within the four walls of a bedroom.

However, the intimacy does not vanish although Mildred does not immediately accept or embrace her sexuality.

Gwendolyn and Mildred’s intimacy presents itself in touch and hand-holding as well. Until their perfect, magical kiss and the intimate scene in the hotel room.

This intimate relationship between Mildred and Gwendolyn is an important element in Ratched. This is because it is true, pure, and excellent for LGBTQ+ representation.

Sarah Paulson and Cynthia Nixon are good friends. They are both queer actresses. This is an influential element of the series.

Both Sarah and Cynthia are queer actresses. In Ratched they play queer characters.

This concept isn’t always in the media. There are many times viewers watch heterosexual actors play queer characters. However, in this series, Ryan Murphy challenges that common concept.

This is extremely important for LGBTQ+ representation. By challenging this concept, queer audiences receive visibility.

You can read more about this topic here.

Sarah and Cynthia also made choices for their characters. Yes, the power they hold! These queer actresses determined the fate of one beloved character, Gwendolyn Briggs.

You can read more about this here and what Cynthia Nixon has to say about her queerness.

All in all, Ratched, the intimate relationship between Mildred Ratched and Gwendolyn Briggs, and the actors who play these women is truly momentous for LGBTQ+ representation!

I can’t wait until Season 2!

Read also:
On The USPS And Feminism
Zomato’s Recent Step Towards Gender Equality
Missing In Action: Queer Women In Media

The “Cuties” Controversy: Is It Valid?

Latino And Women Of Color Are Lacking In Hollywood