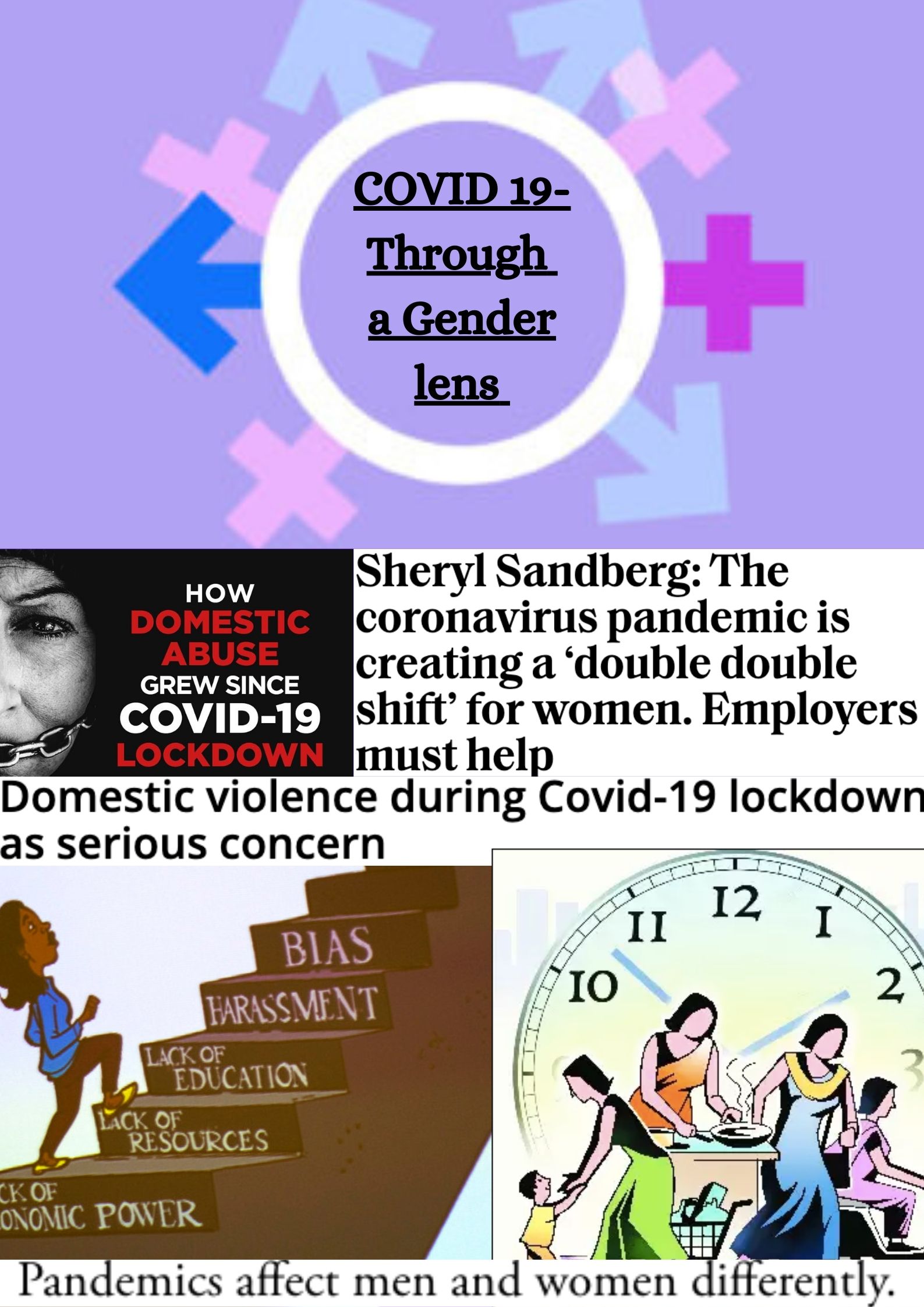 What will soon be termed as a major historical event is currently taking shape right in front of our eyes. In the course of the past five months, the COVID-19 pandemic, or as popularly called the coronavirus, has wreaked havoc throughout the world. As per the Center for Systems, Science, and Engineering (CSSE) at John Hopkins University,  more than 300,000 deaths across the world have been reported at the hands of the disease.

Whether it’s a war or a pandemic, the effects of the hazards are never “equally hazardous” to all.

Any pandemic that occurs, such as the one at our behest right now, creates divides and inequalities within societies. Women, marginalized communities, including migrants, differently-abled (physically and mentally), and lesbian, gay, bisexual, transgender, queer, and intersex (LGBTQI+) and the poor become its worst sufferers.

Extending a gender-lens towards COVID-19 highlights a set of challenges which may be applicable to countries and its people across the world:

a. Gender based violence and abuse:

To stay at home might be a safety measure, but is it really safe for all? World Health Organisation’s regional director for Europe, Hans Kluge, reported a 60% rise in calls by women subjected to violence in Europe. In India, the National Commission for Women recorded more than twofold increase in gender-based violence since a nation-wide lockdown was announced. Similarly, the National Domestic Violence Hotline of the United States of America recorded a surge in the reports of women against their abusers. In the Hubei province of China, the heart of the initial novel coronavirus outbreak, domestic violence reports to police more than tripled in one county alone during the lockdown in February.

b. Gendered division of workforce and the socio-economic impact:

According to the analysis by Citigroup Inc, a potential $1 trillion could be lost from global growth as female workers fall out of the workforce during this period. Of 44 million workers in vulnerable sectors, about 31 million female workers face potential job cuts compared to 13 million men, underscoring that women globally are more vulnerable to losing their jobs during the crisis. 70% of the global health workforce are women, emphasizing the gendered nature of the health workforce and the risk of infection that female health workers face. This increases their chances of being at the receiving end of discrimination. Lack of healthcare facilities and resources for women right now can lead to a higher mortality rate.

In most societies, women hold the burden of being primary caregivers. The discriminatory social norms put pressure on the women to be responsible for every chore. Whether it is of maintaining cleanliness at home to preparing each meal, their traditional role as primary caregivers for the sick increases exposure to the diseases. The 2002-2003 SARS epidemic and 2014-16 Ebola outbreak stand as a testimony for the same.

The Women and Family Ministry of Malaysia, on March 30, 2020, released recommendations and tips for women. It included suggestions for them on “how to manage their households and husbands during the movement control order.” Some of the recommendations were “giggling coyly, regularly wearing makeup and dressing up neatly,” etc. The Ministry removed this list of recommendations after receiving wide backlash. Any official body uploading such a list in the first place displays the inherent sexism.

It becomes important to dig into why gender-based discrimination occurs in the first place. Disparities against women cannot be treated as an isolated act of violence but a consequence of the uneven power structure which places the position of men over women. In an agrarian society of the earlier centuries, physical strength was the prime measure of strength. Women, due to their unique biological experiences, were soon labeled “weak,” and a power structure came into existence. Power doesn’t dissolve voluntarily; those who benefit from being in control work to continue being in control. We’ve traveled a long way. However, we still have a long path to cover. Even more so, as gender identities become more fluid and as we take into account how different sections face disparities differently.

A more gender-inclusive outlook towards the pandemic can help to curb the adverse impacts. Governments and policymakers should strive to take measures to mitigate the social consequences of this pandemic.

For the women and non-binary individuals facing abuse, the decentralization of support should be executed, including the involvement of civil society.

To incorporate the voices of women on the front lines of the response is the need of the hour. Women of different sections have different needs, so it is important that there is also a diverse representation of women on all levels. Their insights can help signal the start of an outbreak and improve the overall health situation.

A need for the creation and execution of an environment safe enough for women to work in must remain intact and should not be compromised with, even during the face of any crises. The unequal social norms should be actively tackled, with governing institutions using their power and voice to encourage the equal distribution of workload within households.

Employers should use this as an opportunity to explore offering options such as modified schedules, on-site child care, and subsidies for child care and eldercare. More broadly, humanitarian aid programs aimed at women and girls need to adapt fast. What can be truly beneficial is an investment towards a regulated collection of gender and age disaggregated data in all surveillance and monitoring efforts to facilitate smart decisions and strong responses.

What transcends borders and has been historically passed down from one generation to another is our sexist conditioning. It’s about time we unlearn it. To divorce a gender lens from formulating policies ends up creating more difficulties than solving the problem at hand.

As Melinda Gates has rightly said, “The disease and its effects are not gender-neutral. Our response cannot be either.”

The measures taken now will come to define the future of millions of women and girls around the globe. An all-gender inclusive health policy helps to make the global health system more inclusive, responsible, and allows for better responses and swift recoveries.

Film Review: I’m No Longer Here – A Mexican Film That Deserves Your Attention

Why We Need Feminism Now More Than Ever

Constantly dwindle between humour and poetry, to pave my way through life. Food, art and music truly make the everyday monotony beautiful. Academically, I'm pursuing Masters in International Studies from Symbiosis School of International Studies. I dream for my words to impact, my actions to positively change and my kindness to heal the lives around me.