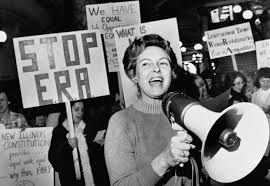 Since its release on April 15, 2020, FX‘s limited series, Mrs. America has caused quite the stir. Mrs. America travels back to the 1970s and tells the story of the movement to ratify the Equal Rights Amendment (ERA). It illustrates two perspectives, that of the second wave feminists; the National Women’s Political Caucus; Gloria Steinem, Betty Friedan, Bella Abzug, and Shirley Chisholm. And, that of Phyllis Schlafly, a conservative activist who opposed the ERA with a sea of fellow housewives by her side. Feminists such as myself, Jessica Valenti, and countless others have been worried about Mrs. America’s approach and portrayal of Phyllis Schlafly. However, I am not here to discuss Mrs. America… yet (stay tuned for that article, please!).

Recently, actress Rose Byrne was criticized for a label she placed upon Phyllis Schlafly in an interview with Variety. She incorrectly and inappropriately labeled Schlafly a “first-rate feminist.” While many immediately chastised Byrne and initiated cancel culture, it was later said that Byrne was being sarcastic. Yes, the label she placed upon Schlafly was rooted in sarcasm. Is your mouth hanging wide open? Perhaps quarantine is getting to many of us, and our ability to detect sarcasm no longer exists. Regardless, a response is warranted.

I wouldn’t refer to Phyllis Schlafly as a “first-rate feminist,” whether sarcastic or not. The classification was off-putting for someone who was certainly an anti-feminist. Are you ready to learn a bit about Phyllis Schlafly?

Schlafly is not a “first-rate feminist.” To begin, Schlafly was best known for being a critical component in the narrow defeat of the ERA. She was deeply committed to conservative social and political views. She held such a staunch belief and confidence in these views, that they guided her through her everyday life until her passing in 2016. Moreover, Schlafly believed that feminists were “foolish.”

The Opposition To The ERA

Schlafly actively and loudly opposed the Equal Rights Amendment. Her sorority of housewives followed obediently and was essential to her anti-ERA campaign. Essentially, she opposed the equality between men and women and favored traditional gender roles. For Schlafly, a woman’s place was in the home, particularly the kitchen. Additionally, in Schlafly’s opinion, the most important role a woman could have was that of a wife and mother. This role is precisely what gave women their rights. Schlafly utilized traditional gender roles when she began her political opposition. She, as well as her supporters, presented homemade bread and jam to state legislators: “Preserve us from a congressional jam; Vote against the ERA sham.” The traditional housewife, the “Suzy Homemaker,” became the symbol of Schlafly’s party. It surely wasn’t a feminist party.

Schlafly enjoyed voicing and listing facts about the ERA to fellow conservatives. She declared, “this is what will happen to our daughters,” repetitively. However, the words Schlafly so often uttered weren’t facts. They weren’t the realities feminists were fighting for. But, her many supporters believed her. This didn’t come as a surprise. After all, a handful of the housewives engaged in racist dialogue and didn’t want their daughters to be “tainted by lesbians.”

While many assume they have successfully discerned Schlafly’s view on feminism through her opposition to the ERA, and her anti-ERA campaign, it journeys much deeper than that. In an interview Schlafly gave in 2014, she defined feminism. She alleged that feminism is a movement that “make[s] [women] believe that we live in a discriminatory and unjust society and that [women] should look to government to solve their problems.” Feminism likewise makes women extremely and unhappy. Schlafly argued that feminism is not about advances for all women or success for all women, that feminism was solely about “power for the female left.” She accused feminists of constructing a false narrative: that women, are in fact, not oppressed.

It is evident that through her fervent conservative views, Schlafly completely redefined feminism. It returned to its rightful place, Feminism with the capital, feared letter F. In turn, she redefined feminists as power-hungry destroyers of women; which, similar to capitalists, “have been a catastrophe for the people [they] were meant to help.”

Did Phyllis Schlafly consider herself a feminist? Her response was, “I would not want to be called a feminist.”

What a dreadful word!

You can find more information on Schlafly’s views of feminism in her book, Feminist Fantasies. I don’t recommend reading it.

Schlafly’s opposition to abortion was common knowledge. She deemed Roe vs. Wade “the worst decision in the history of the United States Supreme Court.” Schlafly continuously chastised members of the court and placed the responsibility “for the killing of millions of unborn babies,” in the hands of court members. However, there was one particular women’s issue that produced Schlafly’s harsh vocalization. Marital rape. Schlafly strongly believed that this issue did not exist. In fact, in 2007 she addressed this women’s issue in a speech at Bates College in Maine. Schlafly undoubtedly illustrated her opposition and views on the serious, certainly existent matter, when she stated: “By getting married, the woman has consented to sex, and I don’t think you can call it rape.” Essentially, to Schlafly, husbands cannot rape their wives. A marriage ceremony, marriage license, and gold band on a ring finger denote consent. Thus, rape in this situation is impossible.

Many like to emphasize that Phyllis Schlafly’s eldest son, John, is gay. However, her views on same-sex marriage and gay rights began before this revelation. Schlafly utilized anti-gay rhetoric in her anti-ERA campaign. She equated the ERA with “homosexual marriage” and alleged that under the ERA homosexual marriage would become legal. This would then “open the door to the adoption of children by legally married homosexual couples.” And, we couldn’t have that, as marriage is defined as a union between a man and a woman. Homosexual marriage is consequently attacking the definition of what a real, true, and proper marriage is. Schlafly also developed a legacy of anti-gay activism. She placed cartoons depicting gay and lesbian marriages (images that showed men dressed as women or women dressed as men), in her newsletters; the Phyllis Schlafly Report. And, she continued to spew rhetoric that encompassed these anti-gay ideas.

Schlafly’s views never changed, even when John was outed by Queer World in 1992. Schlafly knew her son was gay and didn’t need the media’s confirmation. But, she continued her anti-gay activism for years after.

For the remainder of her life, Phyllis Schlafly remained steadfast in her beliefs on the ERA, feminism and women’s issues, same-sex marriage, and various liberal ideologies. Donald Trump praised her as a “conservative hero.” That’s understandable, since they both preached, “America first.” But, perhaps Schlafly is remembered best for saying: “News flash: one reason a woman gets married is to be supported by her husband while caring for her children at home.”

So I ask you, was Phyllis Schlafly a “first-rate feminist?”

My answer is no, she was not. I strongly believe she was an anti-feminist. And, that’s not sarcasm.

PTSD Showing Its Magic During The Pandemic

Why Must She Be Defined As A Mrs.?