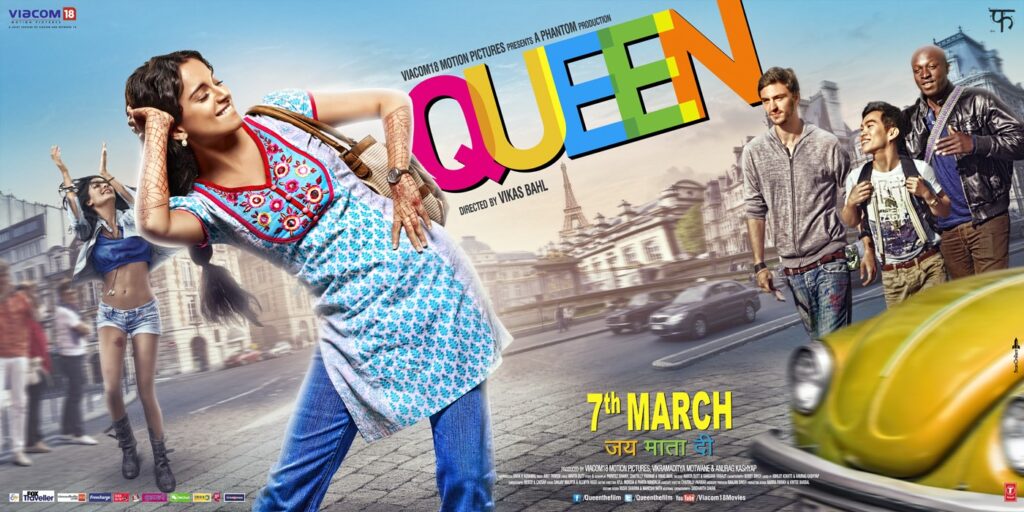 Starring Kangana Ranaut, with Rajkmumar Rao and Lisa Haydon in supporting roles, Queen is definitely one of my all time favorite movies. Queen shows the journey of an under-confident Indian girl, Rani, who decides to go on her honeymoon to Paris and Amsterdam alone, after her fiancé Vijay calls of their wedding because, after living abroad, he thinks he is too good for Rani.

Rani meets Vijaylakshmi in Paris, who is a fun and free-spirited woman, and helps Rani out by giving her a tour around the city and doing everything she could not do in India because of her fiancé and the double standards girls face there.

There are many scenes throughout the movie that shows parallels Rani’s life with Vijay. One that really touched my heart is when she is at a club, and there is a Bollywood song playing, and she just dances her heart out with Vijaylakshmi and everyone around her. It also shows a flashback of how her fiancé did not allow her to dance and when she did, he got furious. The scene shows Rani crying a bit but then continuing to dance carefree. Vijaylakshmi was an amazing character of this movie and I will always remember her carefree personality.

Another beautiful part of this movie is the boys she meets when she goes to Amsterdam; Oleksander from Russia, Taka from Japan, and Tim from France. The movie shows a beautiful friendship between the four even though they all are from different parts of the world. Throughout her time in Europe, Rani’s character has developed beautifully into a confident Indian girl. What I loved is that she didn’t complete change who she was or become completely westernized; she just gained confidence to be herself, she still had her Indian values and roots represented. To all my desi sisters out there, it is okay to be you. Just BE YOU.

At last, my favorite thing about the movie, Vijay regrets leaving Rani and he even searches for her in Amsterdam. When Rani is back home in Delhi, the first thing she does is go yo Vijay’s house. He thinks she is there to forgive him, but instead, Rani gives back the engagement ring and says “thank you,” walking out with a beautiful smile and genuinely being happy and content. I was so shocked that I literally looked up the movie and read the summary to see if that was the ending. This is the first Bollywood movie that I have seen which has such an ending: where the heroine does not get back with the hero. Every desi girl should watch this movie and understand that you do not need such negativity around in your life, and be confident and love yourself! YOU ARE A QUEEN.

Thank you to the cast and crew of Queen for giving us such a beautiful movie!

Tweet
bollywoodconfidenceSouth Asisa
Previous Article5 Black Women You Probably Won’t Hear About In SchoolNext ArticleThings We Will Not Tolerate In 2017: Silenced By Senate

Narges
Hi! My name is Narges, I am 18 years old and I am currently in my first year of studying Marketing - B Comm. In my free time I love to dance, eat, and binge watch Bollywood movies and Desi TV shows.